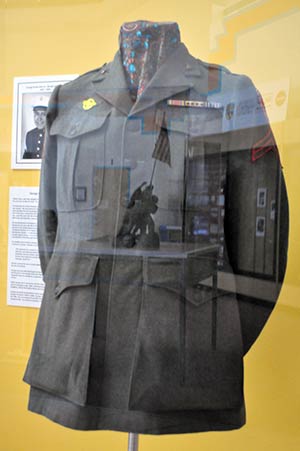 Editor's Note: This article by Mark Charles was originally published on Native News Online on August 14, 2016.

WINDOW ROCK, ARIZONA - August 14 is National Navajo Code Talkers Day and it is good that, as a nation, we remember and honor these hundreds of courageous men for their service to our country. On the Navajo Reservation, in Window Rock AZ, there is a statue erected in their honor with a plaque commemorating their service. I would like to share with you the words of this plaque and the names of each of the Code Talkers, but first I would like to give you some of the broader historical context that these men literally came out of.

Indian Boarding Schools were the brainchild of an army Captain and Indian fighter named Richard Henry Pratt. The first school was named Carlisle Indian Industrial School and was opened in a deserted military base in Carlisle Pennsylvania in 1869.

"A great general has said that the only good Indian is a dead one. In a sense, I agree with the sentiment, but only in this: that all the Indian there is in the race should be dead. Kill the Indian in him, and save the man."

In 1893 mandatory Indian Education became law and Chester Nez, one of the original 29 Navajo Code Talkers, was educated in an Indian Boarding School in Fort Defiance AZ. Here are some of his words describing his boarding school experience as a child.

Snow fell softly outside the dormitory windows. Loud whispering came from two beds away. Navajo. I'd been caught speaking Navajo three days before. The Pima matron brushed my teeth with brown fels-Naptha soap. I still couldn't taste food, only the acrid, bitter taste of lye soap. Teachers at the school were encouraged to be strict and the smaller children were frequently targeted by slaps or kicks. But the lingering taste of the soap was worse than either of those punishments.

The knowledge of constant danger sat lodged in the pit of my stomach like a rock. I tried by best to answer questions correctly, but never knew when a matron would strike. They watched, their dark cold eyes waiting for us to make a mistake, to do something wrong.

I was always afraid.

"Indian Boarding Schools remained in operation in the United States as late as the 1990s. The number of Native American children in the boarding schools reached a peak in the 1970s, with an estimated enrollment of 60,000 in 1973. Investigations of the later twentieth century have revealed many documented cases of sexual, manual, physical and mental abuse occurring at such schools."  (Wikipedia)

In 1924 the US Congress passed the Indian Citizenship act which declared all non-citizens Indians born in the US to be citizens. However because voting was considered a states right, the states of Arizona and New Mexico kept Indians disenfranchised until 1948.

Thus, because the Navajo reservation is located in the Southwest, primarily within the states of Arizona and New Mexico, when the Navajo Code Talkers were serving this country, they did not even have the right to vote.

Please keep this history in mind as you read the following words:

During World War II, in the South Pacific Theater, the Japanese were extremely proficient at breaking into military radio communications and transmissions. Thus they were able to decipher U.S. Military codes. The U.S. Armed forces needed to find a secure method of communication if they were to have any chance of defeating a cleaver and intelligent foe. To counter the cleverness of the Japanese cryptographers, 29 Navajo Marines were recruited to devise a secret military code using their native language. By war's end, there were over 400 Navajo Marines serving as code talkers and the code vocabulary had doubled. So successful was this innovative code that the Marine Corps commanders credited it with saving the lives of countless American Marines and soldiers. It enabled their success engagements throughout the Pacific Theater which included the battles for Guadalcanal, Wake Island, Tarawa, Saipan, Guam, Midway, Iwo Jima, and Okinawa. The code paved the way to early victory for the allied forces in the South Pacific. Major Howard M. Conner, 5th Marine Division Signal Officer stationed in Iwo Jima commented on the gallantry of the Navajo Code Talkers: "Were it not for the Navajos, the Marines would not have taken Iwo Jima."