MINOT, N.D. — A member of the Three Affiliated Tribes (Mandan, Hidatsa, and Arikara) was chosen by the North Dakota Associated Press Sportscasters and Sportswriters Association (NDAPSSA) as both athlete of the year and North Dakota’s Mr. Basketball. Jesse White, 18, of White Shield, N.D. is Arikara and was the lone Native student athlete to be considered for Mr. Basketball among five finalists. 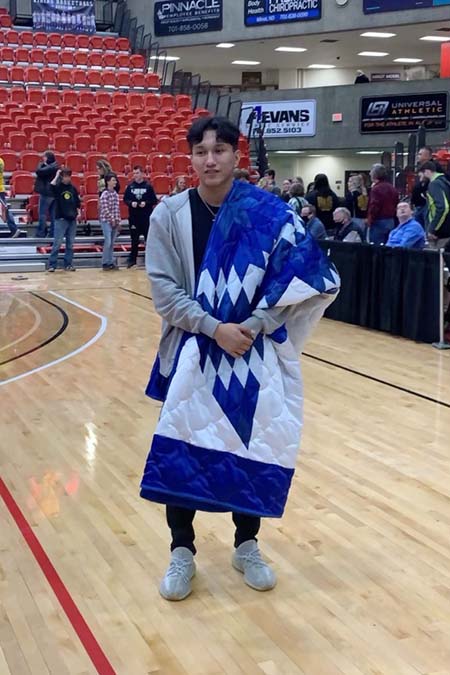 “It’s a great blessing, it feels good,” White told Native News Online. “This is definitely for my family, for my people from my reservation. This is to show any kids from any reservation that if you put your mind to anything you can do it.”

Mr. Basketball is awarded annually to the state's top high school senior, according to NDAPSSA’s website.

White finished second on the all-time scoring list for North Dakota prep boys basketball history with 2,768 points, according to The Bismarck Tribune. He has been clocking varsity team minutes since the 7th grade. This past season, he averaged 28 points per game, according to NDAPSSA.

White’s school, White Shield High School, has an enrollment of 38 students, making it one of the smallest schools in the state. Because enrollment is so small, players like White often get overlooked by the media and schools seeking talent.

As for what’s next, White is definitely going to pursue college basketball, but hasn’t committed yet. “I want to make the best decision for me,” he said.

“I think about Jesse, our little Inanni (brother) just six years ago when he made his varsity debut as a 7th grader and him making sports history is amazing,” said White’s older sister Dawn White to Native News Online. “As a family we are so proud of his accomplishments and warrior spirit day in and day out.”

Dawn added: “We know he will continue to keep achieving his goals and dreams.”