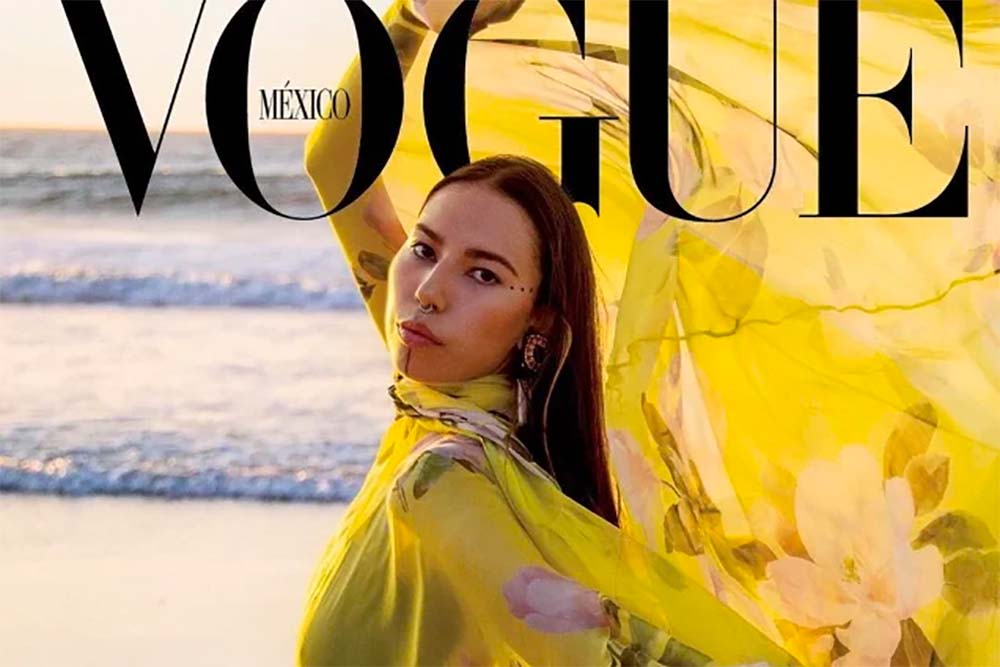 “I have really Lakota facial features,” the teen told Native News Online. “I have the whole bump on my nose, I have really high cheekbones. I always felt like I was like that one ugly kid in class, because everyone just loved all the white girls.”

Now, Chasinghorse is setting a new beauty standard. This month, she is featured on the front cover of Vogue Mexico in the second shoot she landed since signing with IMG models—an international management company—in December.

The Alaska Native teen’s 20-page spread features photos of her donning high fashion paired with her own Indigenous jewelry on the beaches of Mexico, on a horse in Native garb, and striking a pose in a Mexican villa. In all the photos, viewers can readily see Chasinghorse’s Native identity made apparent by traditional tattoos on her chin and temples.

Vogue Mexico editor Karla Martinez told the teen when they saw Chasinghorse’s “pitch” her agents sent in that they knew they’d found their May covergirl “because she was very unique.”

“I think it's because, for years now, the industries are growing and becoming more inclusive and you're starting to see a lot more not just Native people, but people of color in general being uplifted and represented in that way,” Changhorse said.

But it’s not just the model’s appearance that got her noticed. Her portfolio included speaking engagements and activism work that has taken her to Washington, D.C. to spread awareness about drilling in the Arctic Refuge, her Alaska Native homeland. Chasinghorse calls herself a climate warrier and land protector. In 2019, she made state news when she and her sister called upon Native leaders to declare a state of emergency on climate change and reinstate a task force to advocate for strong climate policies at the annual Alaska Federation of Natives conference—the largest statewide Native organization in Alaska. Chasinghorse now serves on that climate task force.

“Our goal is we want everyone to acknowledge that there is a climate crisis in Alaska, that it’s urgent, and that 12 of our villages in Alaska are going to become climate refugees if we don't handle it,” she said. “We’re supposed to be stewards of the land...and we really need to step into our role.”

She emphasized that another goal is to look towards the future and slowly steer Alaska’s oil and gas-based economy towards more sustainable solutions.

In a wider lens, Chasinghorse’s goal is to be more than a model, but a role model. As a seventh grader, she was the lone Alaska Native to testify in front of an all-white school board on why Columbus Day should be changed to Indigenous Peoples Day—a meeting she had to skip school to attend. The board ultimately ruled in her favor.

“Our history has been whitewashed,” she said. “We are the ones responsible to break the stereotypes to break these barriers that keep us and hold us victim to our government (and) the way people treat us. To see good representation through beauty and fashion will change people’s minds and thoughts.”

Chasinghorse said she found this to be true even on set for Vogue Mexico.

Photographers for the shoot Inez Van Lamsweerde and Vinoodh Matadin wrote in a shared Instagram caption that, before meeting Chasinghorse, their knowledge of how “real Native American people” live was limited, and that Chasinghorse took time to “explain what each face tattoo (given to her by her mother) means for her as part of her ancestors’ heritage.” 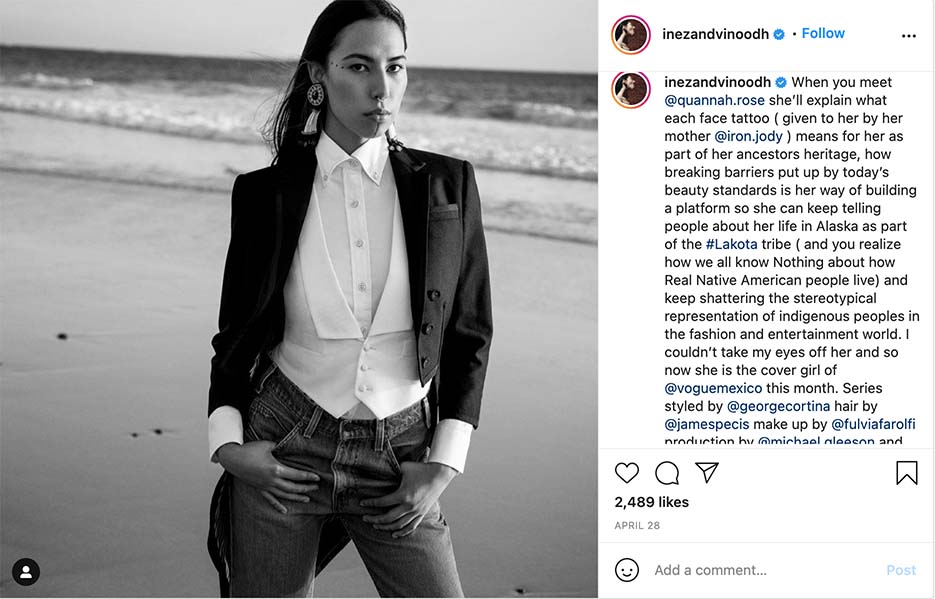 Chasinghorse said that knowing her colleagues took home the messages she shared with them made an impact on her.

“It's amazing to me because now our people are getting the representation that we need, but also people are starting to become more educated on who we really are, not just the stereotypes,” she said.

With empowerment and positive reinforcement backing her up, Chasinghorse sees something different when she looks in the mirror than she once did as a kid.

“The more I grew within myself, I realized that I shouldn't wish for any other features because now I look in the mirror, and I see my ancestors looking back at me because I carry the same features that they had, and it really does bring back so much pride for me now,” she said. “Becoming a model, now their favorite thing about me is my nose, and that was my biggest insecurity.”