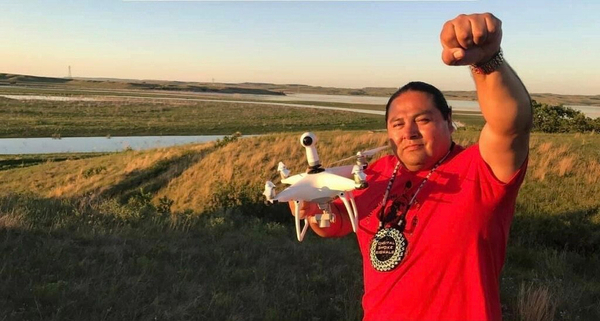 SCHURZ, Nev.— A year after Walker River Paiute filmmaker, professor, journalist and activist Myron Dewey, 49, was killed in a car accident, his family is still waiting for justice.

On July 13, 2022, John Walsh, the Reno man accused of causing the deadly car accident that killed Dewey, was charged with driving under the influence resulting in death and reckless driving resulting in death. Months later, Walsh still hasn’t appeared in front of a judge.

The Nye County District Attorney’s Office filed charges against Walsh nine months after Dewey was killed. According to multiple news outlets in Nevada, Walsh’s blood tests showed “levels of cannabinoids” after he was taken to the hospital for injuries resulting from the car accident. Despite this, the Nye County Sheriff’s Department closed the case, reopening it months later at the insistence of the Dewey family.

Walsh’s arraignment was scheduled on Sept. 7, but when Dewey’s family showed up at the courthouse, they discovered the arraignment had been rescheduled for Nov. 8, 2022.

“The journey of holding this guy accountable is going to be long,” Dewey’s son, Joseph Dewey, told Native News Online. “We’re still at the very beginning of the process.”

Because Walsh wasn’t charged until 10 months after Dewey’s death, his arraignment hearing will be his first appearance in front of a judge. At the hearing, Walsh will be made aware of the charges he faces, including any potential penalties and rights he has while being prosecuted. If convicted, he faces up to 20 years in Nevada state prison.

Dewey’s family says driving the process to hold Walsh accountable has been draining.

“This whole thing, with the state, has been sketchy,” Joseph Dewey told Native News Online. “Drones, my dad’s work, have been stolen, charges came late, court dates have been rescheduled without notice or explanation.”

Dewey co-directed the award-winning 2017 film Awake: A Dream from Standing Rock, which tells the story of the Indigenous-led, peaceful resistance and fight for clean water, the environment, and the future of the planet during one of the largest protest encampments in American history.

His drone footage of the Dakota Access Pipeline protests garnered recognition for the cause and elevated his status as a journalist covering environmental and Indigenous issues. In 2021, he was a visiting professor at Duke University, teaching rogue journalism at the Center for Documentary Studies.

Dewey gained widespread media attention when on Oct.8, 2016, he was arrested by North Dakota police for flying a drone over property owned by Energy Transfer Partners, the multinational corporation that owns the Dakota Access Pipeline. He was charged with misdemeanor stalking, but charges were later dropped.

“I’m a survivor of a mass genocide across the United States,” Dewey said in his last live stream video. “When we look at corporate greed and land theft, we, as Indigenous peoples, are the witnesses. Once we’re gone, the land is yours, and you’ll have nothing to live on.”

Dewey’s death has raised concerns for many, and some consider his death suspicious.

“He talked about corporate greed the day before his death,” Joseph Dewey said of his father’s last live stream. “Thousands of people believed in his words because he was transparent.”

“Myron was an integral leader in not only my life, but the lives of many,” Hawk told Native News Online. “Through his actions and words, he taught us how trauma affected our people—psychologically and spiritually.”