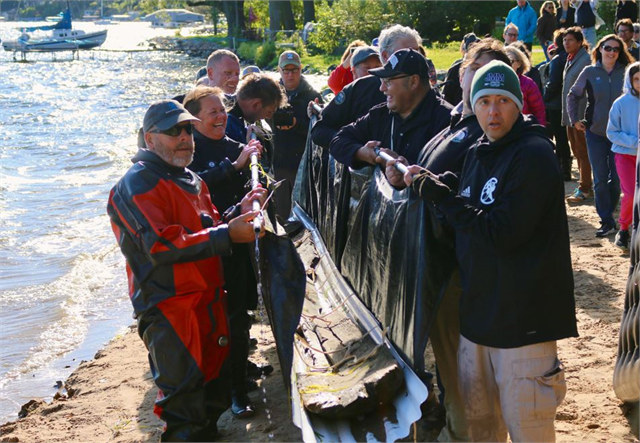 MADISON, Wisc.— On Thursday, Sept. 22, the Wisconsin Historical Society (WHS) recovered a 3,000-year-old dugout canoe from the bottom of a Madison lake with the assistance of two Wisconsin Tribes.

The canoe, recovered from Lake Mendota in downtown Madison, is about 14.5 feet long and carved from a single piece of white oak. According to the WHS, radiocarbon dating analysis performed on the recovered canoe places its origin at 1,000 BC — making it the oldest canoe ever discovered in the Great Lakes region by approximately 1,000 years.

It is the second canoe recovered in the last year from the same lake —last November, the WHS announced that it recovered a canoe that dated 1,200 years old. Both canoes were likely made by ancestors of the Ho-Chunk Nation.

“Finding an additional historically significant canoe in Lake Mendota is truly incredible and unlocks invaluable research and educational opportunities to explore the technological, cultural, and stylistic changes that occurred in dugout canoe design over 3,000 years,” WHS Archaeologist Dr. James Skibo said in a statement. “Since it was located within 100 yards of where the first canoe was found at the bottom of a drop-off in the lakebed, the find has prompted us to research fluctuating water levels and ancient shorelines to explore the possibility that the canoes were near what is now submerged village sites.”

Representatives from the Ho-Chunk Nation and Bad River Band of Lake Superior Chippewa joined the WHS to recover both canoes.

“These are things that we, as Ho-Chunk people, have known,” Ho-Chunk Nation Public Relations Officer Casey Brown told Native News Online. “A canoe finding isn’t revelatory to us because we have known we have been here for thousands of years.”

The canoe was first discovered in May 2022 by WHS Archaeologist Tamara Thomsen while diving in Lake Mendota, Madison’s largest lake.

The area of the lake the canoe was found in is populated, with homes and recreational boat traffic nearby.

“It was pure luck that someone from the [Wisconsin] Historical Society that is also a scuba diver happened to go there,” Brown said.

An end of the canoe was protruding out of the lake. Brown said that other divers likely had seen the canoe before but didn’t know what it was.

“To anyone else, this would look like a piece of wood, or driftwood, just sticking out of the water,” Brown said.

Brown went on to say that lower water levels — an effect of climate change — likely made the canoe visible.

Brown said that both canoes confirm that the Ho-Chunk people have been in the Madison area for thousands of years.

“Western academia, especially history, is based on evidence, or proof,” Brown told Native News Online. “Well, here’s a 3,000-year-old canoe. Anyone who wants to deny Indigenous history, it’s harder to do that now.”