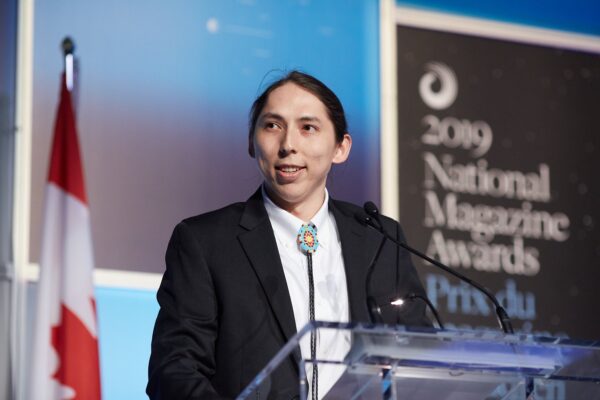 GRAND RAPIDS, Mich. — Native News Online announced today that Kyle Edwards has joined the staff as its first-ever managing editor. The hire is part of the publication’s broader initiative to expand its coverage of Indian Country and build its audience of Native and non-Native readers.

Edwards (Anishinaabe) comes to Native News Online from ProPublica, where he was the Lorana Sullivan Senior Business Reporting Fellow. His reporting revealed how wealthy GOP donors lobbied former Florida governor Rick Scott for a lucrative Trump tax break meant for poor communities, and he contributed to ProPublica’s coverage of the coronavirus pandemic, as well as other projects focused on the Trump administration.

Before ProPublica, Edwards was a staff writer at Maclean’s, where he investigated the sexual abuse of Indigenous women at worker camps in Canada’s pipeline industry and the disproportionate number of First Nations children in Manitoba’s foster care system. His reporting on Indigenous affairs in Canada earned him a Canadian Association of Journalists Award for Emerging Indigenous Journalist. In 2019, he and colleagues won a Canadian National Magazine Award for an oral history of a bus crash that killed 16 members of the Humboldt Broncos, a junior hockey team from Saskatchewan. He won silver at this year’s NMAs for a feature about Neskantaga First Nation, an Indigenous community in northern Ontario that has been without safe drinking water for 25 years.

“Kyle is a strong addition to Native News Online as we endeavor to change the narrative about Indian Country by providing fair, balanced and accurate coverage of social issues, policy matters and economic development involving tribes throughout the United States,” said Levi Rickert (Prairie Band Potawatomi), founder and publisher of Native News Online. “We’re excited to have him on the team as we build out our newsroom, and he’s joining us at an important time, as we prepare to launch a new digital presence and expand our coverage of American Indians and Alaska Natives with our new ‘Local Impact’ series about tribes and tribal citizens that are often overlooked by the media.”

Edwards is Anishinaabe and was raised on Lake Manitoba First Nation in Manitoba. He is a member of Ebb and Flow First Nation.

“It’s an exciting time to join Native News Online, which has long been a crucial voice for our Indigenous communities,” Edwards said. “I’m thrilled to become part of a growing team that is committed to telling important and diverse stories from all corners of Indian Country.”