WASHINGTON — When Mashpee Wampanoag Tribe Chairman Cedric Cromwell took a call from the Bureau of Indian Affairs regional office late last Friday afternoon, he figured they were just checking in on how the tribe was dealing with the COVID-19 pandemic.

Instead, the topic of the call was both unexpected and shocking, which is really saying something these days: U.S. Dept. of Interior (DOI) Secretary David Bernhardt was ordering Cromwell to disestablish his tribe’s reservation.

Translation: The 321 acres of land Mashpee Wampanoag had put into trust during the Obama administration is going to be taken out by the Trump Interior Dept.

Cromwell has not rested well since that call. He has been working hard ever since. He spent the weekend speaking to the media, tribal advocates and policymakers to get word out about the pending fate to his tribe’s land.

Leaders across Indian Country and the state of Massachusetts loudly voiced their disapproval of the act and its timing in the strongest language possible, calling it “unacceptable”, “reprehensible”, “craven” and “cruel.”

“I’m asking all Americans to join in with us to fight our constitutional rights and freedom. Now, if it gets taken away from us, your rights will be taken away from you...you need to stand with Mashpee,” Cromwell says in the video. 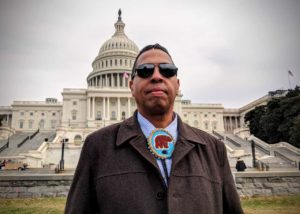 The Mashpee tribe, whose ancestors have lived in the region for thousands of years and are believed to be the first Indigenous people to interact with the pilgrims, gained federal recognition in 2007.

While the DOI order doesn’t mean the Mashpee tribe would lose federal recognition, it does mean those 321 acres would no longer be considered sovereign land. That would likely mean the tribe would have to shut down its social services, courts and police force, and would also torpedo its efforts to build a casino in nearby Taunton.

Since Sept. 2018, the tribe has been involved in two separate lawsuits to resolve the issue. Late last month, the First Circuit Court in Boston ruled against the tribe in its battle to get land the tribe owns back in trust. Another case in Washington, D.C. federal court is still pending.

The National Congress of American Indians (NCAI), the oldest, largest and most representative American Indian and Alaska Native organization in the United States, came to the defense of the Mashpee Wampanoag Tribe on Monday afternoon.

“This surprise action is a devastating blow to not only the Mashpee Wampanoag Tribe, but all of Indian Country, particularly during the COVID-19 pandemic, and violates the federal government’s solemn trust responsibility to safeguard tribal nations and their lands,” the National Congress of American Indians said in a press release.

NCAI calls the Interior Department’s decision misguided, saying it undermines the Tribe’s ability to continue to self-govern, provide vital programs and services to its citizens, and protect its traditional lands and cultural resources.

“Removing the homelands of established communities and villages endangers the very existence of an entire nation of people. This is unacceptable, and such an action during this pandemic is an outrage,” NCAI CEO Kevin J. Allis said

“The Mashpee Wampanoag have a right to their ancestral homeland no matter what craven political games the Trump administration tries to play," the senators said in the statement.

"Disestablishment of the Mashpee Wampanoag reservation would re-open a shameful and painful chapter of American history of systematically ripping apart tribal lands and breaking the federal government’s word. We will not allow the Mashpee Wampanoag to lose their homeland. We will fight this cruel injustice that promises to have ripple effects across Indian Country.”

President Kirk Francis of the USET’s Sovereignty Protection Fund minced no words in a statement about the DOI’s action.

“The action by this Administration in rendering such a decision is dishonorable and reprehensible on its face, but to do so when we are fighting a national pandemic is shameful. If there was any question before, it is clear that we are experiencing a crisis in Indian Country at this moment,” Francis said.

The DOI’s action could send a shiver throughout Indian Country because it creates an “existential crisis” for tribes that were federally recognized after 1934, according to a report by Boston NPR affiliate, WBUR. The station cites an email to Mashpee tribal leaders from Jean-Luc Pierite, who heads the North American Indian Center of Boston, that states “The department's move without a court order signals that reservations across the United States could be taken out of trust at the discretion of the secretary of the interior.