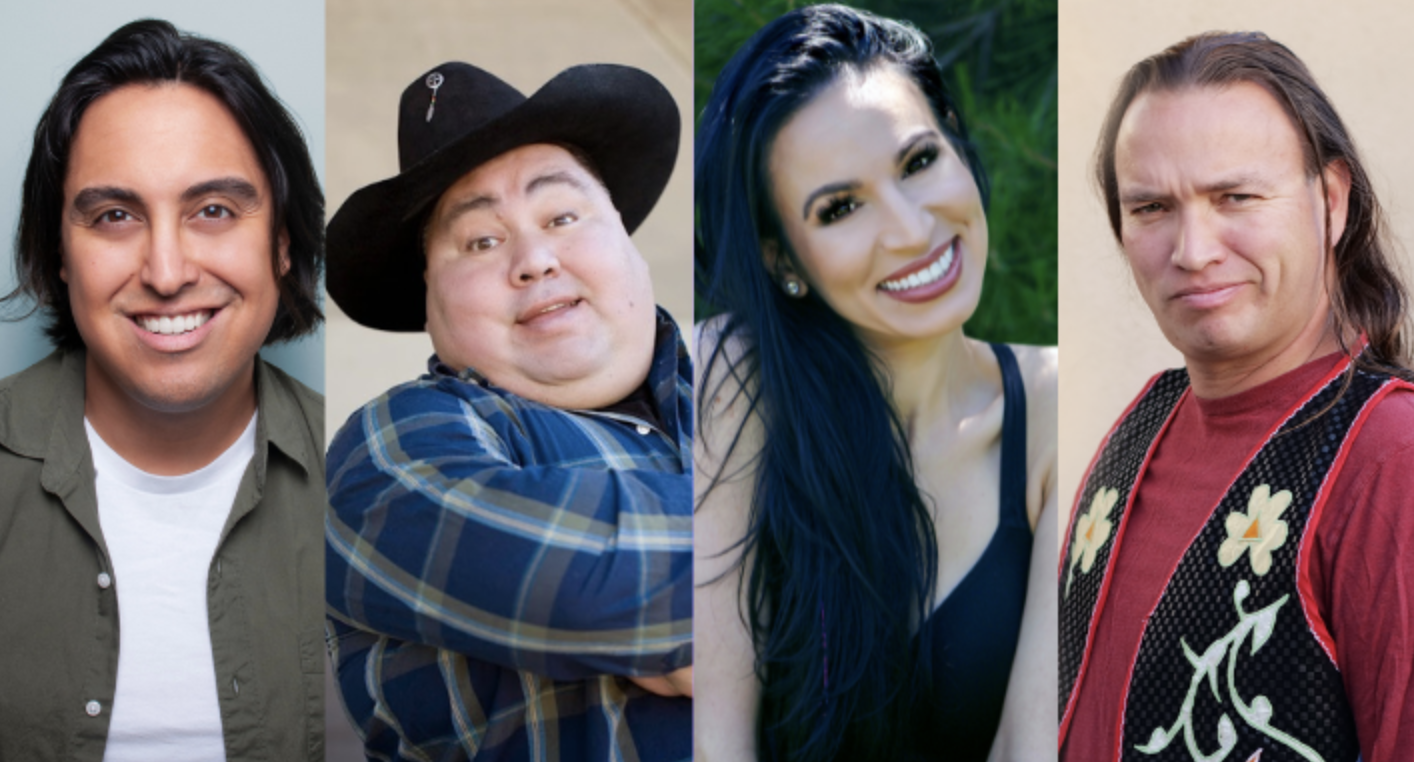 This weekend and next week in Indian Country, celebrations abound with film festivals, powwows, live music, Native American comedy and much more.

The American Indian Film Festival returns in person to San Francisco to celebrate its 47th year, following a hiatus during pandemic. With more than 70 films across 17 programs, it is the world’s oldest and most recognized international film exposition dedicated to Native American cinematic accomplishment.

Started in 1975 in Seattle, the festival moved to San Francisco in 1977, where it found its permanent home. In 1979, the American Indian Film Institute was formed as a non-profit arts organization to foster an understanding of the culture, traditions and issues of contemporary Native Americans.

This year, the festival is back in San Francisco at venues across the city, including the Koret Auditorium at the San Francisco Public Library, the Letterman Digital Arts Center, the Southside Theatre in Fort Mason, and the SOMArts Cultural Center. Many of the festival’s film programs are also free to attend by reserving tickets on the AIFF website.

In recognition of Native American Heritage Month and in complement to our Tipi to Tiny House exhibit, the Nowashe Village Museum is presenting four documentary films over the course of three Sunday afternoons in November. The films will have a special focus on the Northern Arapaho of the Wind River Reservation, whose traditional territory includes what is now Longmont.

Home from School: The Children from Carlisle (2021)
In 2017, a delegation of Northern Arapaho tribal members traveled from Wyoming to Pennsylvania to retrieve the remains of three children who died at Carlisle Indian Industrial school in the 1880s. It’s a journey into the troubled history of Indian boarding schools and a quest to heal generational wounds.

Each film screening is free and will conclude with an audience Q&A.

Join the Nowashe Village and inside Wood Memorial Library for a variety of educational and eye-opening activities, free family fun in celebration of Native American Heritage Month.

Join Taylor Stasis as she explores the traditional foodways of the Herring Pond Wampanoag Tribal Nation, including hunting, gathering and agricultural practices. She will discuss which wild plants, seeds, nuts and fruits were gathered and the major fish and fauna hunted.

Explore the fascinating history and practice of quillwork with Miciah Stasis (Herring Pond Wampanoag), who celebrates and maintains this traditional cultural practice today in her modern artworks. Miciah also will discuss the methodology of creating quillwork pieces and the decorative use of natural dyes.

Learn about the night sky through stories that the Cherokee and other Native Americans have told about the Big Dipper, North Star, Pleiades, and Milky Way.

Journey into Native American heritage and experience firsthand the crafts and foods that originated in South Dakota. Join native South Dakotan Heather Goodface-Ferguson, in this exciting four-session class as you learn where the dream catcher REALLY originated from and craft your very own to keep! Wrap the 3-5” hoop using your choice of faux suede cord or ribbon and add floss or faux waxed sinew. Finish by lacing beautiful beads and feathers into your dreamy web. Enjoy a sampling of traditional Lakota foods like Wasna Jerky, Wojapi and Choki Bread and learn the difference between traditional and modern-day Native food. You will leave this journey with a better understanding and appreciation for the Lakota and their traditions.

Award-winning Indigenous author Tommy Orange will be in conversation with Antonia Gonzales from National Native News to discuss his book and this year’s NEA Big Read title, “There There,” as well as the author’s life.

Tommy Orange’s “There There” is an exceptional debut novel that grapples with the history of a nation while showcasing a side of America few of us have ever seen. After noticing a lack of stories about urban Native Americans, Orange created a remarkable work that explores those who have inherited a profound spirituality but who are also plagued by addiction, abuse, and suicide.

Antonia Gonzales is a member of the Navajo Nation and grew up in Arizona and New Mexico. She is the Anchor and Producer of the award-winning nationally syndicated radio program National Native News, which airs on tribal and public radio stations across the United States and Canada, covering social, economic and cultural issues which impact Indigenous people worldwide.

“Women of the White Buffalo” follows nine modern Lakota women of all ages living on two reservations in South Dakota. The Diversity Committee of New Providence is the co-sponsor of this documentary screening celebrating Native American Heritage Month. In return for the public screening rights, the filmmakers ask for support for nonprofits operating on the Pine Ridge and Rosebud reservations where the film was shot.

Kick-off Native American month with one of the nation’s largest powwows with fancy dancers from across Indian Country. Events include community Choctaw singing, stickball, social dancing, and more.

Ridgecrest serves as the perfect location for the events, as the home of artifacts and petroglyphs dating more than 10,000 years old. Little Petroglyph Canyon alone contains over 20,000 documented images, one of the largest concentrations in the Western Hemisphere. The unique location of the petroglyphs is protected, which has kept them in remarkably preserved condition, and they are only accessible through tours with the Maturango Museum. In an effort to increase accessibility for visitors hoping to see the petroglyphs, special bus tours have been designed for the weekend of the festival. Tickets for the Petroglyph tours must be purchased in advance here.

Dakota Modern: The Art of Oscar Howe
Saturday, Nov. 5 through May 14
Portland, OR

“Dakota Modern: The Art of Oscar Howe” introduces new generations to one of the twentieth century’s most innovative Native American painters. Howe (1915–1983) committed his artistic career to the preservation, relevance, and ongoing expression of his Yanktonai Dakota culture. He proved that art could be simultaneously modern and embedded in customary Očhéthi Šakówiŋ (Sioux) culture and aesthetics—to him, there was no contradiction.

Dakota Modern traces more than forty years of the artist’s career and development from early conventional work created while in high school in the 1930s through the emergence in the 1950s and 1960s of his innovative and abstract approach to painting.

Kelly Jackson, a tribal member of the Lac du Flambeau Band, is a singer, songwriter, philanthropist, tribal advocate, and of course, most importantly, a mother and a grandmother. Her music has gained admiration for its unique flare and remarkable ability to inspire and empower listeners. She composes rhythms that compliment her native roots and lyrical messages that invoke healing, self-empowerment, and cultural reflection. Her debut album, Spirit of a Woman, earned a NAMA for Best Americana Album of the Year, Renditions of the Soul, and also received international recognition.

Taos Chamber Music Group presents the award-winning, married duo of Suzanne Teng and Gilbert Levy in a performance of original global music compositions that will take listeners on a journey around the world from a Chinese bamboo flute prayer to a Gypsy Serenade, an ecstatic Arabic-flavored trance dance, and back home with an homage to New Mexico, Kingdom of Mountains played on Native American bass flute. Also in Teng’s array of instruments are silver alto and bass flutes, Chinese flutes, Indonesian flutes, and Arabic winds. Levy plays global drums and percussion as well as the bass dulcimer, Turkish saz, and metal hand pan drums. They will be joined by flutist Nancy Laupheimer and cellist Mark Dudrow.

Enjoy an evening of Native American comedy storytelling presented by the Washington Center of the Performing Arts in partnership with Indigenous Performances Productions, a non-profit organization connecting the community through education and awareness of Native arts and artists.

The Seward Community Co-Op is once again partnering with the Indigenous Food Network and members of Minneapolis-based Indigenous-led organizations Dream of Wild Health, Division of Indian Work, Gatherings Café, and American Indian Family Center to share their knowledge through a series of cooking and lecture workshops.

Attendees will learn how to make delicious meals, drinks, medicines, and desserts as instructors share their expertise on sourcing, sustainability, and environmental impacts on local and native-grown foods.

Landa Lakes is a Chickasaw writer, musician, activist, and artist. As drag persona Landa Lakes, in 2005, she founded drag performance groups in San Francisco, including the Two-Spirit Native American drag troupe, the Brush Arbor Gurlz, and the creative and campy House of Glitter. Her notable honors include the New York Fresh Fruit Festival Performance Award, KQED LGBT Local Hero Award, and she was publicly elected as Grand Duchess 36 of the Grand Ducal Council of San Francisco, a non-profit organization of which she now serves on the executive board. Dr. Roger Kuhn is a Poarch Creek Two-Spirit Indigequeer soma-cultural sex therapist and sexuality educator. Roger’s work explores the concepts of decolonizing and unsettling sexuality and focuses on the way culture impacts and informs our bodily experiences. In addition to his work as a licensed psychotherapist and AASECT-certified sex therapist, Roger is a faculty lecturer of American Indian Studies at San Francisco State University.

Indigenous communities are often under-served, disconnected, and have less access to opportunities. Dream Catcher Foundation, a program of the A+C Foundation, created this opportunity for Indigenous artists to exhibit their works in partnership with several Indigenous celebrities. Funds raised by each work sold will be distributed equally between the artist and charities supporting Indigenous causes.

A number of well-known and respected influencers and Dream Catcher Council members are promoting Peace Love Art: Indigenous Collective. This is the first year for this annual event, in which we will grow to support each of the seven key issues facing Native American and First Nation peoples today, including Violence Against Women and Children, Voting Rights, Language & Heritage, Health & Wellness, Water and Other Natural Resources, Poverty & Unemployment, and Education.