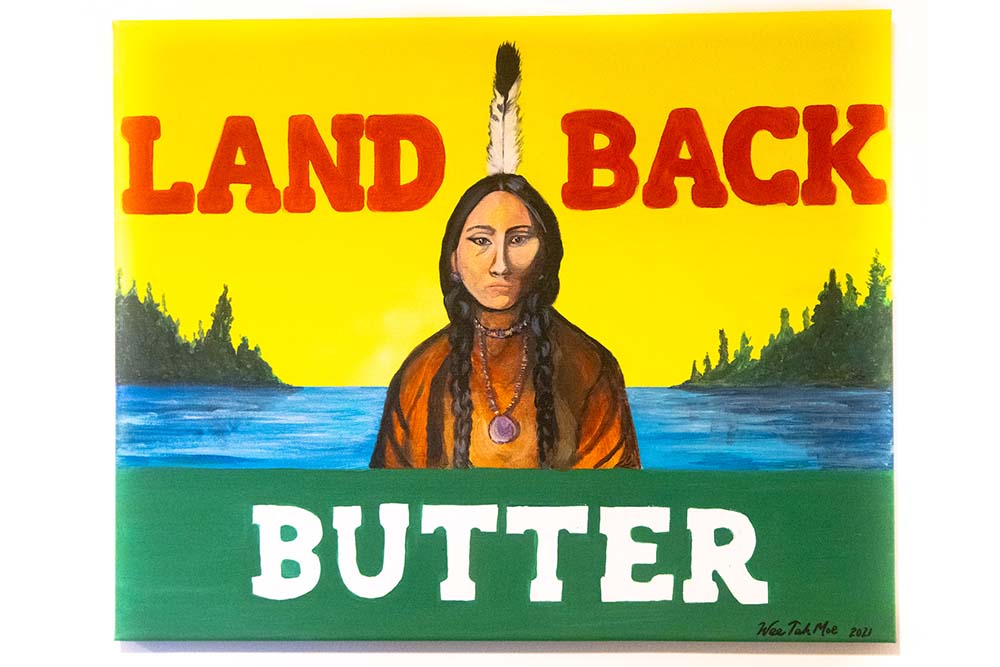 This weekend and next week, Indian Country is a kaleidoscope of folklore, fine art, and funny business.

Must-see moments include Ojibwe storytelling for the snowy season, strong artistic statements from the Shinnecock Nation, some quality time with the notorious Auntie Beachress, and an environmentally-conscious conversation with one of the most fascinating  photographers in Indian Country. 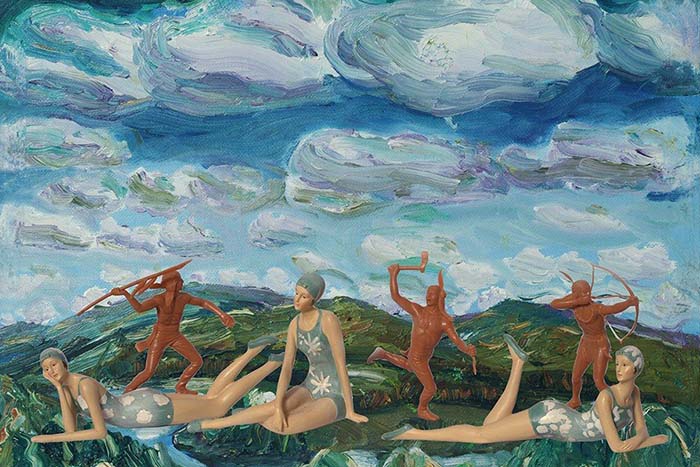 Day at the Beach (from Toys Aren’t Us) by Mohawk artist Shelley Niro is featured in Outcropping – Indigenous Art Now”opening February 4 at Southampton Arts Center in Southampton, NY. (Jeremy Dennis)

If you would rather slather your bread with Land Back Butter instead of Land O’ Lakes, the new exhibit Outcropping: Native Art Now is the show you’ve been craving.

The exhibit features work from a variety of Indigenous artists, with a concentration on  Shinnecock Nation artists like Denise Silva Dennis, who is also the mother of exhibit curator Jeremy Dennis.

“Land Back Butter is a homage to the popular brand, Land O’Lakes Butter,” which featured an Indigenous woman named Mia from 1928 - 2020. “Mia’s image, sitting in front of a pristine lake, framed by an exquisite pine tree forest, was unceremoniously erased from the popular brand… and replaced with red, bold lettering, ‘Farmer Owned,’”  Silva Dennis told Native News Online. “(The painting) is a reflection of all that I am as an Indigenous woman while paying homage to all Indigenous women. We women and men are the stewards of the land and no one, especially colonizers, should ever forget it! While spreading that butter on the slice of morning toast, reflect on the Land Stolen/Land Back movement that is gaining strength all across the country!”

Silva Dennis’ work also represents the long standing struggles between the tribe and the glitzy Hamptons communities that have stolen sacred land, and the eternal Shinnecock connection to the region.

Another strong statement is Mohawk artist Shelley Niro’s “Day at the Beach (from Toys Aren’t Us),” a study in contrasts coupling settler sunbathers without a care in the world, enjoying the splendor of the stolen land, with insulting, racist Indian toys wielding weapons.

Conversations and Connections with Cara Romero 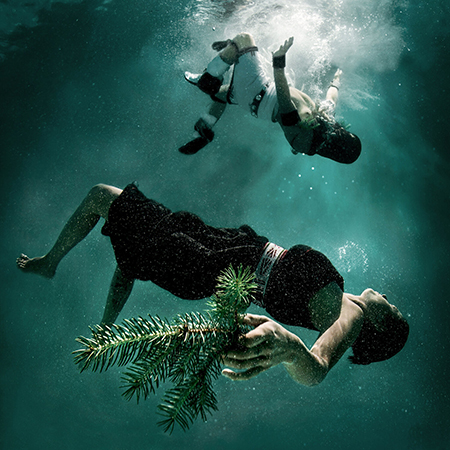 Images from Chemehuevi photographer Cara Romero's Water Memories series are featured in the exhibition This Land: American Engagement with the Natural World at the Hood Museum of Art in Hanover, NH. On Wednesday, Feb. 9, Romero will discuss the series during an installment of "Conversations and Connections." (Cara Romero) WHEN: Wednesday, Feb. 9, 9:30 a.m.

The politics of place, resources, and land-based identity are at the core of the Hood Museum of Art exhibit This Land: American Engagement with the Natural World.

No one captures the Native connection to nature and land quite like Chemehuevi photographer Cara Romero, whose work figures prominently in the exhibit.

Her eco-focused photos “Oil Boom,” depicting a Native dancer seemingly buried under a bleak row of oil pump jacks, and “Water Memories,” showing two Indigenous people free-falling through a liquid dreamscape, are deeply affecting visual meditations on pre-contact Indigenous relationships with water and oil, and how they contrast with modern methods of extraction and hydroelectric development that have displaced and depressed Native people.

On Wednesday, Romero along with Jami Powell, the Hood Museum’s curator of Indigenous art, will wade deeper into the Water Memories series and Romero’s photographic practice during an installment of Conversations and Connections.

Twenty-twenty two is already shaping up to be a major year for Romero. Her solo show Mythos and Sub-Pop is on display at the Juanita Harvey Art Gallery at Midwestern State University in Wichita Falls,Texas. She is also involved in Outcropping - Indigenous Art Now At the Southampton Arts Center, in Southampton, New York. And in April, her work will be featured in the Our Selves: Photographs by Women Artists from Helen Kornblum exhibit at the Museum of Modern Art in New York City. 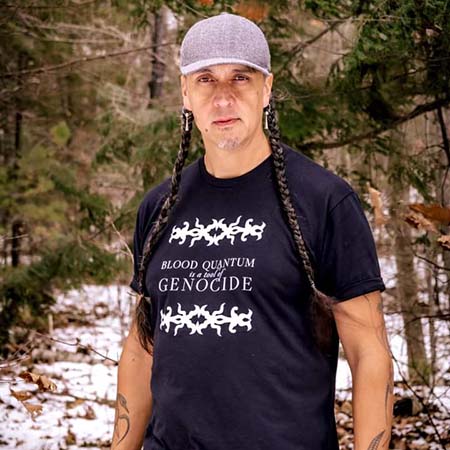 Winter is the season for storytelling, and every Ojibwe band shares one unifying ground rule.

“You have to tell stories when there is snow on the ground. The ground is frozen and you can’t be out and about … that’s the rule,”  Liz Arbuckle Wabindato, the northern outreach coordinator for the Wisconsin Historical Society, and a member of the Bad River Band of Lake Superior Chippewa told Madison365.

To celebrate storytelling season, the Wisconsin Historical Society is offering a virtual platform to some of the most skilled and authentic story-spinners in Indian Country.

“These presenters are such wonderful resources and they come to the local schools and they share their time all of the time,” Wabindato said.

So, why exactly is winter the storytelling season? There are a variety of reasons, according to Wabindato.

“And then I heard it the third way, which is that it’s a really practical and logical way to tell stories because, during the other three seasons, we don’t have time to be just sitting around telling stories. You need to be working and securing food for those long winter months, I respect all three of those versions. It’s different traditions of different bands.”

Michael Laughing Fox Charette of the Red Cliff Band of Lake Superior Chippewa, was the first storyteller featured in the series. 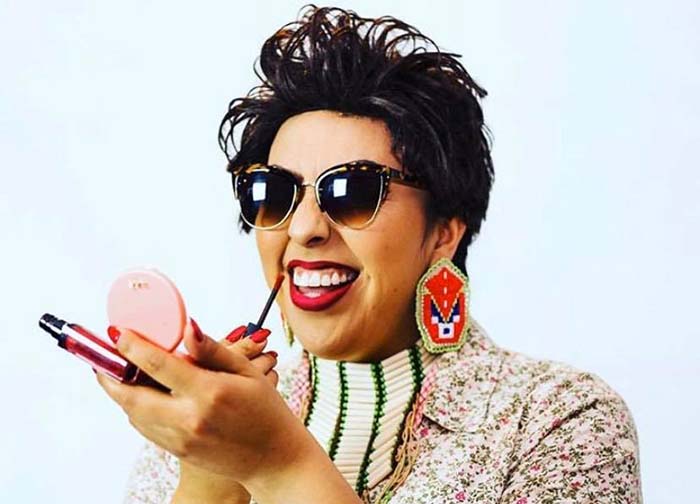 “Auntie Beachress” is an enigma wrapped in red lipstick and sunglasses. One minute she’s imparting priceless advice about self confidence, and the next minute she’s getting dragged out of a powwow by security guards for cheering too loud during the dance competition–or at least that’s why she claimed she was thrown out.

On Sunday, the hilarious hot mess Beachress will bring her wacky words of wisdom to the Spokane Comedy Club, where she will be joined by WhiteClay Nation comedian Kasey “Rezzalicious” Nicholson.

Beachress is the alternate identity of Hidatsa, Lakota and Dakota comedian and motivational speaker Tonia Jo Hall, who has been relating to audiences both live and online as the bawdy Beachress for more than a decade.