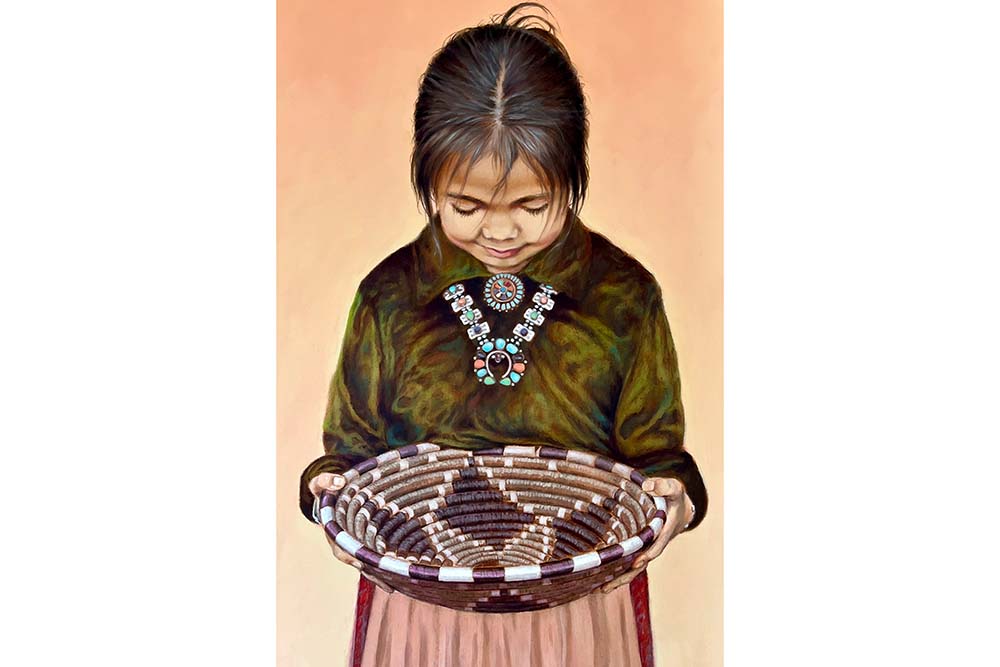 Indian Country is filled with cultural adventures through the beginning of March.

Next weekend, Phoenix will be the apex of the Native American art scene when the 64th Heard Museum Guild Indian Fair and Art Market signals the start of the art market season, and the Phoenix Indian Center celebrates its 75th anniversary with an art market and fashion show.

Outside of Arizona, Native winter games are afoot in Seneca and Haudenosaunee territory, and a leading lady of ledger art with a passion for pink Cadillacs will pop in for a virtual presentation.

It’s a lot to take in, so let Native News Online’s event guide help you curate your cultural calendar.

The Beijing Winter Olympics may have faded into athletic history, but there is still plenty of competitive cold play to be had at the Seneca Art & Culture Center at the Ganondagan State Historic Site.

The 19th annual Native American Winter Games is a family-friendly opportunity to witness and participate in traditional Seneca and Haudenousanee games and sports, including dog sledding, snowsnake, and wooden snow boat racing.

To fully immerse in the frosty fun, visitors are encouraged to bring their own snowshoes to walk the many Ganondagan trails.

At any time during the outdoor games, visitors can warm up inside the center with activities including storytelling and games, opportunities to learn about wampum and white-tailed deer, and other games, as well as children’s activities and delicious Iroquois white corn foods. 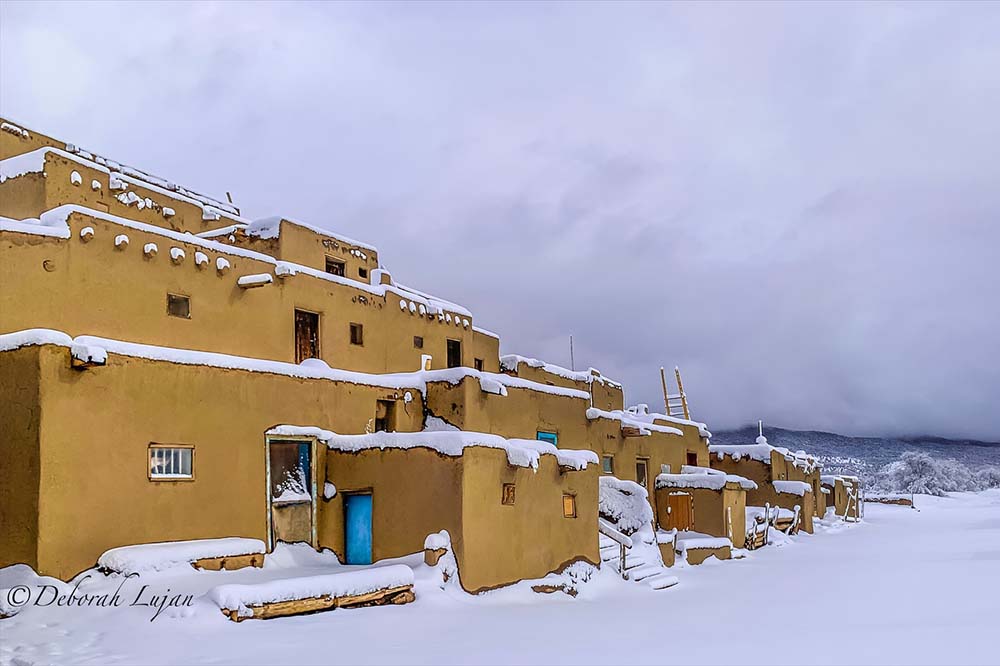 The photo New Snow, New Year by Taos Pueblo artist Debbie Lujan, will be available for sale at the 64th Annual Heard Museum Guild Indian Fair and Market on Saturday, March 5 and Sunday, March 6, at the Heard Museum in Phoenix, AZ. (Debbie Lujan)

WHEN: Saturday, March, 5 and Sunday, March 6

On New Year’s Day, in a normal, pandemic-free year, Taos Pueblo tribal members gather at sunrise in the Pueblo plaza to herald the arrival of the Turtle Dancers.

“Sadly, on the early morning of January 1, 2022, Taos Pueblo did not have their winter dances for the second year in a row,” said Taos Pueblo photographer Deborah Lujan. “It is understood that there is hope that our ceremonies and the people will dance again. The ancient buildings and the people that live within them have endured hardship over time and we are confident that this too, shall pass.”

Lujan’s photo “New Snow of 22,” a beautiful high-desert snowscape capturing the eerie emptiness of the plaza on New Year’s Day, is one of the pieces the photographer will be selling at the prestigious Heard Museum Guild Indian Fair and Market in Phoenix next weekend.

“This photograph gives insight to how quiet it is at the Pueblo right now. Despite the quiet, I’m thrilled to show the sublime beauty of the serenity of my home at this time, but from the perspective of a tribal member living through these extraordinary time,” Lujan said. “I’ve shown my photography every year at the Heard since 2014 and have won a few ribbons since then. A first place ribbon remains the elusive prize and is the motivation to create something thought provoking and unique without exploiting my culture or the trends of the day.” 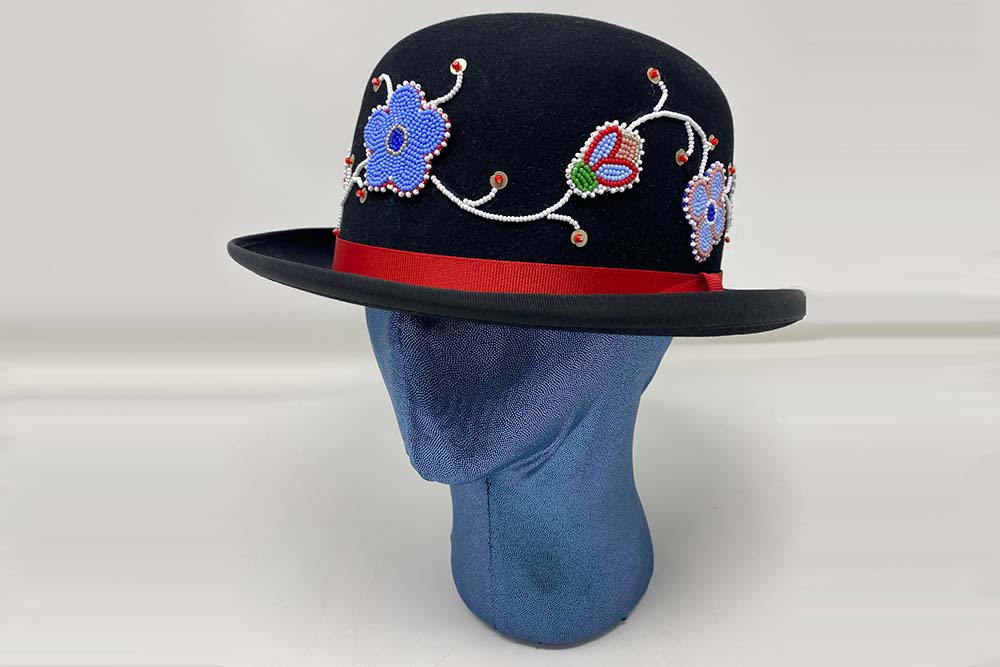 This beaded bowler hat by Little Shell Tribe of Chippewa designer Carrie Moran McCleary of Plains Soul, will be available for sale at the 64th Annual Heard Museum Guild Indian Fair and Market on Saturday, March 5, and Sunday, March 6, at the Heard Museum in Phoenix, AZ. (Santo Domingo Pueblo Jewelry)

“New Snow of 22” is one of thousands of pieces of art inspired by personal and cultural  moments, stories, and senses, that fill the grounds of the Heard, complemented by Native dancing and drumming.

Those lucky enough to attend the event and learn from the artists in person, will pick up plenty of valuable pieces in myriad forms, as well as priceless new stories and friends.

For those who plan to be there, and folks who won’t be making the journey to Phoenix this year, Native News Online chatted with four notable Heard artists  with different specialties, about participating in the Heard event and the featured pieces they’ve been busy perfecting.

On the fine jewelry end, Heard veterans and art power couple LeJeune and Joe Chavez of Santo Domingo Pueblo Jewelry will once again be offering elegant necklaces, cuffs, rings, earrings, and many more masterpieces in the Santo Domingo style, that join Joe’s silversmithing with LeJeune’s colorful bead and stone work.

Two of the pieces the couple are most eager for friends and clients to see are an inlay dragonfly necklace with handmade turquoise beads and a silver stamped cuff studded with striking Sonoran gold turquoise.

“We like selling at the Heard Museum because it gives us an opportunity to meet new clientele and reconnect with collectors of our jewelry.  We feel honored and happy that we get to sell and show our jewelry at one of the most prestigious Native American art shows in the country. It also gives us a chance to see our friends and colleagues in the Native art world.  As self-employed artists we rely on these shows as it is our livelihood.” 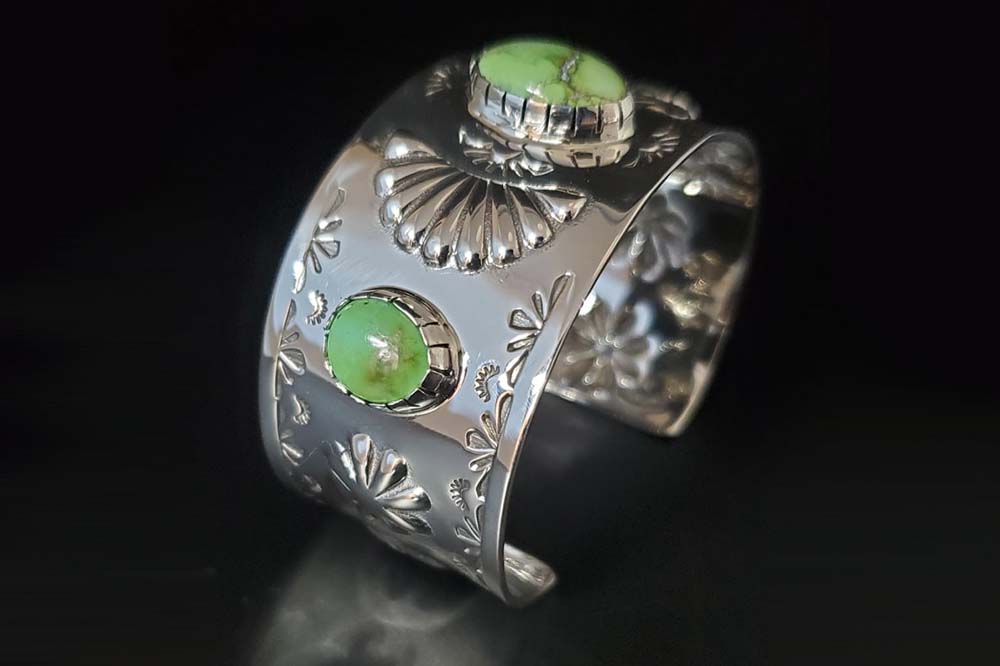 In the painting arena, Choctaw artist Karen Clarkson is continuing her tradition of representing admirable Indigenous women of all ages. This year, she’s proudest to present Basket of Blessings, a heartwarming oil painting of Navajo girl Drew Wilson smiling down at an intricate basket that looks so real you feel like you could reach out and fill it with corn, squash, or another Indigenous treat.

Wilson, the daughter of Trina Begay, lives with her family in Rock Point, on Navajo Nation. The painting, which will be available for purchase at the Heard Museum shop beginning the evening of March 4, is derived from a photograph taken by Navajo photographer and longtime Clarkson collaborator Matt Toledo.

“I have painted Drew many times and never tire of her beautiful spirit,” Clarkson said.

Over in the Heard world of wearable art, Little Shell Tribe of Chippewa designer and artist Carrie Moran McCleary, owner of Plains Soul, is especially eager to share a beaded derby hat she just completed.

“I love to work with vintage items, and this high quality derby hat is from an antique store in Sheridan, Wyoming. I combined my Anishinaabe floral aesthetic, and my work together in a joyous celebration of beaded love,” she said. “I’m elated to attend the Heard in person and I’m sending everyone prayers for safe travels to and from the market. And thanks to the Heard for bringing so many artists together.” 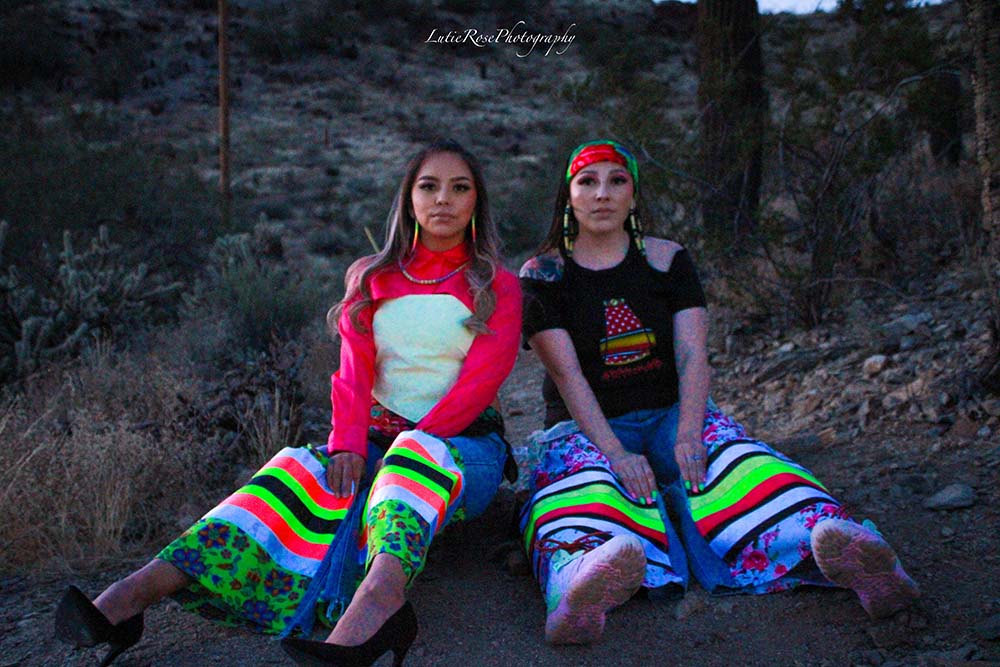 But the Apaches who filched the fabrics didn’t steal for sport. They did it to survive.

“Our lifestyle as Apaches had changed. We couldn't settle in a different place every season because we were busy warring and trying to survive,” San Carlos Apache and Akimel O’Otham designer Joanne Miles-Long told Native News Online.  “We didn't have the time to (prepare) the hide to make a buckskin dress anymore, and we needed clothing now to keep us warm in the wintertime, so we started raiding. We took those clothes, and we made them ours. And that is where the traditional Apache camp dress comes from.” 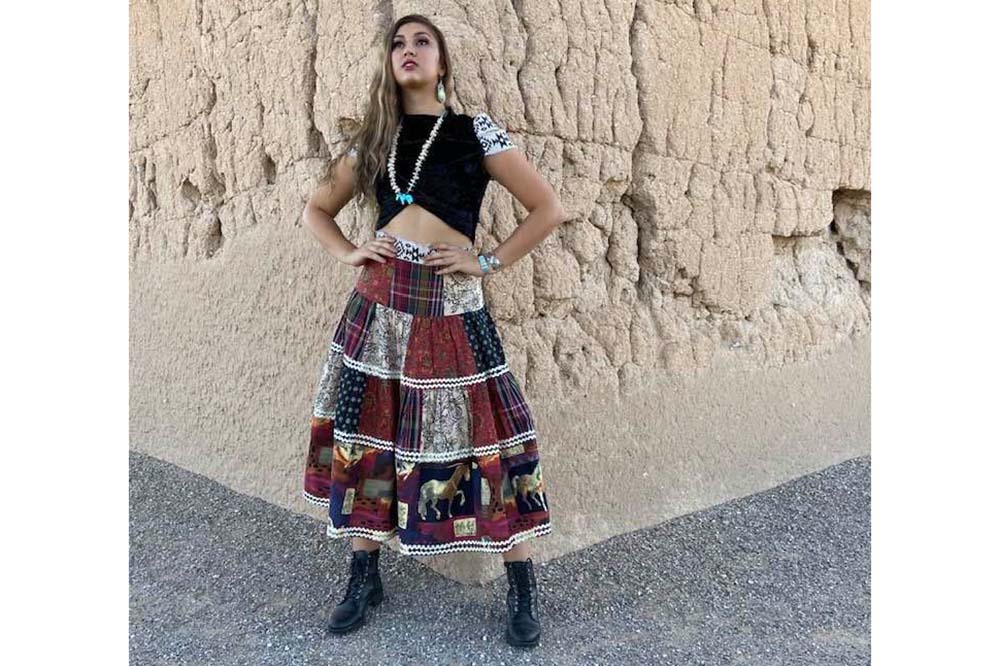 Five of Miles-Long’s looks expressing the evolution of Apache apparel will take the runway next Saturday during a fashion show celebrating the 75th anniversary of the Phoenix Indian Center. The catwalk will also rock with the fashions of Chippewa Cree designer Rebekah Jarvey, Ohkay Owingeh Pueblo, Taos Pueblo and Navajo designer Sage Mountainflower  and Navajo designer Wilfred Jumbo of Jumbo Creations.

The anniversary festivities also include an art market reflecting the talents of the local Native community.

“The Phoenix Indian Center has been helping the community for 75 years and this is a great way to show support,” Rebekah Jarvey, who helped organize the fashion show, and will also be presenting her “Being Indigenous is So Beautiful” collection, told Native News Online.  “I’ve met a lot of people who haven't attended an Indigenous fashion show and now is the time to take on a beautiful experience of real-time art and culture.” 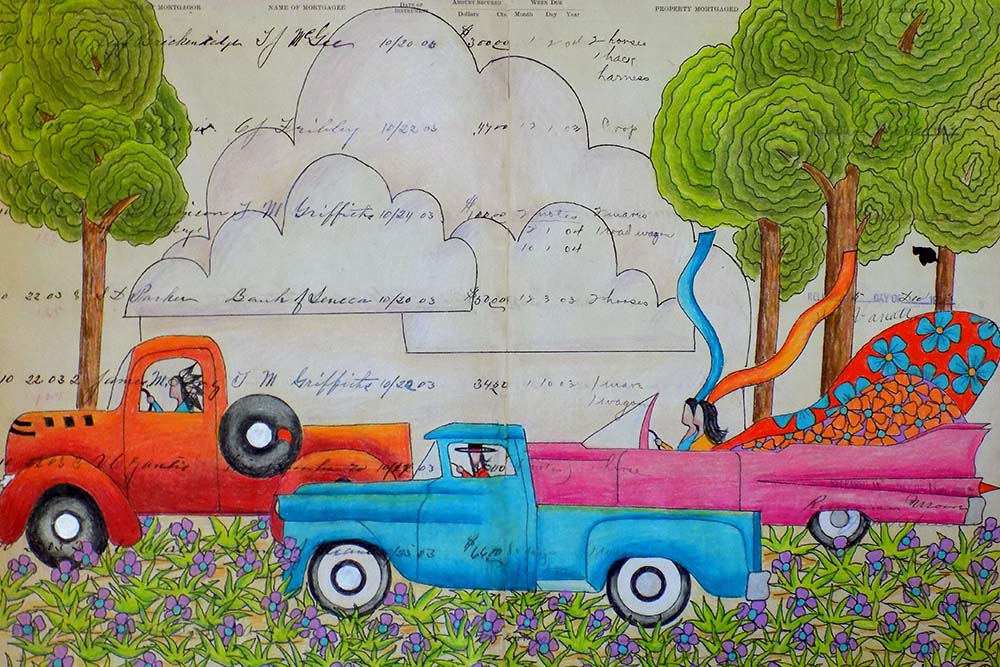 Rez Rides by Caddo and Winnebago artist Dolores Purdy. Purdy will talk about ledger art during an online discussion presented by the Museum of Native American History in Bentonville, Ark, on Saturday, March 5. (Dolores Purdy)

When you see a glam pink “Caddo-lac” cruising across a sheet of antique paper, you know it’s a Dolores Purdy ledger piece.

Her most recent Caddo-lac ledger work is Rez Rides, which places the cool car in the company of two lowrider pick-up trucks, and will be featured in the upcoming issue of First American Art Magazine.

“I live north of Santa Fe, in an area close to Española, which is the low-rider capital of the world. We see lots of pickup trucks around here and not a lot of pink Cadillacs.

On Sunday afternoons, these guys go to the Walmart parking lot and they're all looking at each other's rides,” Purdy told Native News Online. “The low-riders aren't really Native American rides, but on the rez, people are checking out each other's rides too.”

Purdy will share more insights about her artwork during the virtual talk A Woman’s Perspective on Ledger Art, presented by the Museum of Native American History in Bentonville, Arkansas next Saturday. Her presentations will be followed by a Q & A session.

Purdy’s success in developing her own fresh, fun, and in-demand ledger art style, rich with imagery of stylish Native women, and influenced by her love of 60s psychedelia, art-deco, and Japanese textiles, is a major achievement, particularly for a female artist.

Long before Purdy and her female ledger art contemporaries like Linda Haukaas and Avis Charley became big names, ledger art was the exclusive territory of Plains Native men, who captured moments of glory in battles first on hides and tee-pees, and eventually with color pencils, watercolors and antique paper. These drawings were known as “Warrior Art.”

“Among Northern and Southern plains cultures women were not allowed to draw or bead representational figures. Abstract figures were only allowed. But now the times have changed,” Purdy said. “Among the first women to do ledger art was Lois Smoky of the (early 20th century Oklahoma Native art group) The Kiowa Six. The others in the group -all men- were not happy with her and would destroy her work. She lasted only 6 months in the group. She gave women and men a voice among the traditional arts.  Now we see male potters and beaders as well as women ledger artists.”