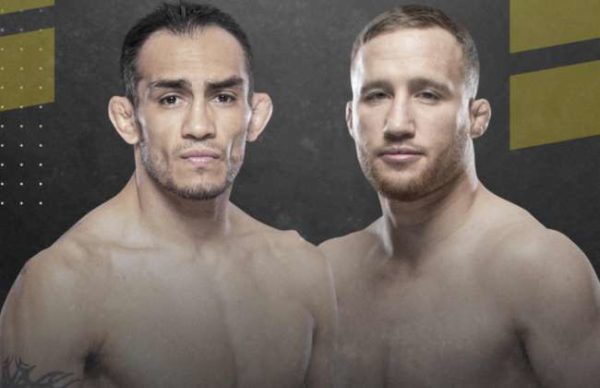 A UFC fight scheduled for April 18 on Tribal land was postponed last night despite UFC President Dana White’s best effort to move forward with the controversial event amid mass stay-at-home ordinances. White, who spoke with ESPN last night, said the decision to pull the plug came from above.

“Today, we got a call from the highest level you can go at Disney, and the highest level at ESPN ... and the powers that be there asked me to stand down and not do this event [next] Saturday." A statement posted last night on the UFC’s Twitter account shed more light on the situation: “While the organization was fully prepared to proceed with UFC 249, ESPN has requested the postponement of the event and subsequent bouts until further notice in light of the COVID-19 pandemic,” the statement read. “UFC looks forward to resuming the full live events schedule as soon as possible.” According to a story reported yesterday by The New York Times, the event, originally booked at the Barclays Center in Brooklyn, was then moved to Tachi Palace Casino Resort, which sits on land owned by the Tachi-Yokut Tribe, part of the Santa Rosa Indian Community. The NYT story alleged White was “skirting Coronavirus limits” by holding the match on Tribal land. 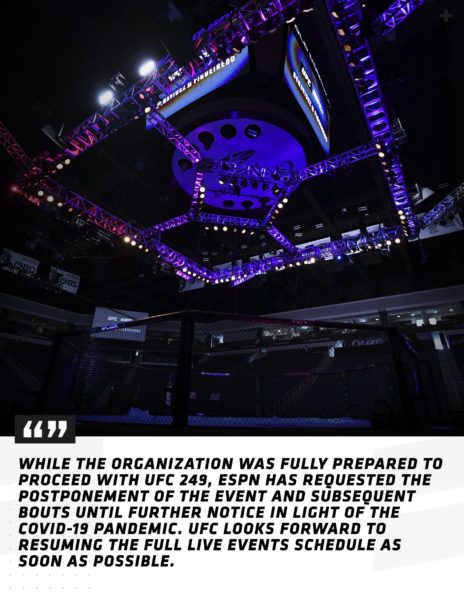 White said when the fight does happen, he remains committed to hosting it on Tribal land.

“... Tachi Palace in California, the Indian reservation, has had our back this whole time, has stood their ground and was willing to do this fight,” White told ESPN last night. “And let me tell you this: When the world gets back to normal, California, that [fight] will be at Tachi Palace."

The now-postponed pay-per-view fight (featuring lightweight title fight between Tony Ferguson and Justin Gaethje) received a backlash from organizations like the Association of Ringside Physicians and was set to occur with no audience in attendance. Earlier this week, White was vocally defiant about cancelling his events. On Monday, he told ESPN he can safely host matches and will “continue to pump fights out.” However, after pressure to cancel due to the pandemic, White confirmed all future bouts have also been postponed until further notice. Though, in his interview last night, he said as soon as he gets the Ok, UFC will resume, “I can go next week," White told ESPN. “So whenever my partner gives me the thumbs-up that they're ready to go, I'm ready to go.”