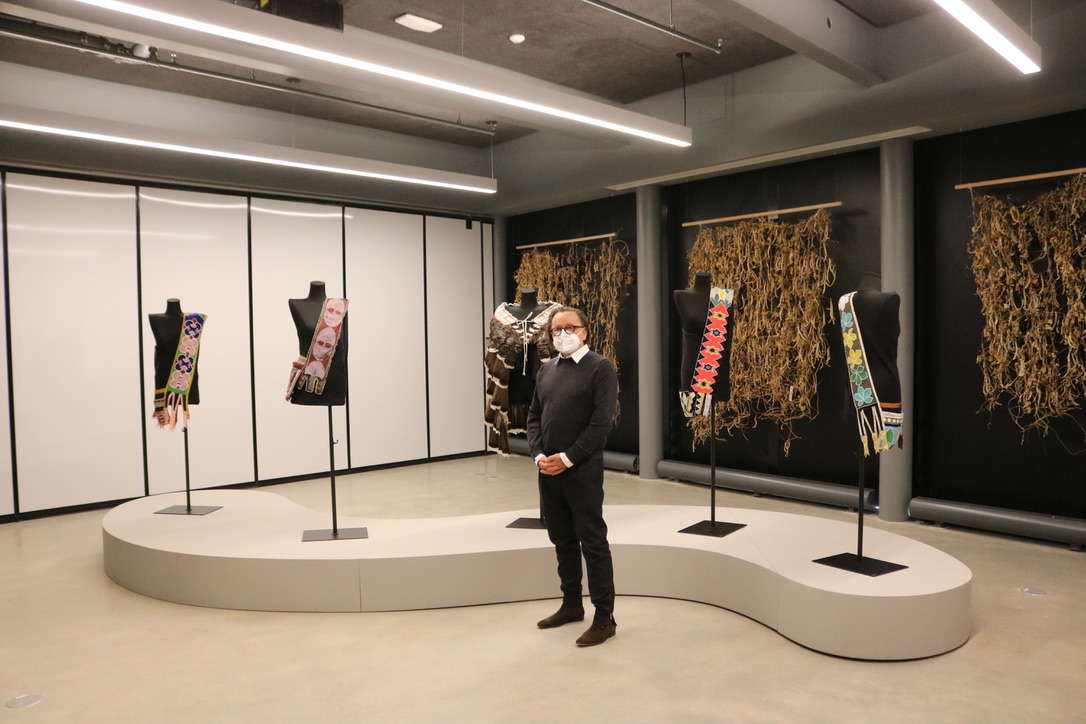 “There’s never been an exhibition to recognize Lenape people here in New York City,” Baker, a cofounder of the Lenape Center in Manhattan, told Native News Online during a walk-through of the exhibit before it opened Jan. 20.

He said he had to knock on a lot of doors to get an exhibit up. “My goal in exhibiting this historic material is to present it—not only to the public, but to our own community—to bring this important work back into contemporary narratives,” he explained.

The exhibit includes Baker's own art: three handcrafted beaded bags, called bandolier bags, that are specifically worn by Lenape men on special occasions to identify individuals. It also displays two historic bags, one recently purchased by the Brooklyn Museum of Art and lent to the exhibition, and the other held by a private collector.

Because the bags are so prized by collectors, Baker said he never saw one in real life until he was completing a residency at the National Museum of the American Indian in Manhattan.

“The message is: the return,” Baker said of the exhibit. “The idea that this important element of Lenape men's dress be revived and could be returned to our communities.”

Lenape people lived on homelands across the Northeast until they were pushed out to Oklahoma, Wisconsin, and Ontario by European settlers, beginning in the 17th century.

Also returned and exhibited on the back wall of the Lenapehoking exhibit are some of the seeds that those displaced tribal members brought out of New York State.

“When you think about people who are being displaced, people are being forced out of their home, what do they take?” he said. “If you look at refugee communities, you'll find that that's one thing that people carry with them, because it's a way of sustaining oneself.

Since 2019, the Lenape Center has collaborated with a farm on Lenape land in the Hudson Valley in upstate New York to replant ancestral Lenape seeds in their native soil. Baker said that the bean seeds used in the three tapestries in the exhibit were donated to a federal seed bank in Iowa upon the passing of a fellow tribal member, Nora Thompson Dean.

“So we knew where they were located, and we were able to access those seeds and bring them home,” he said. “The goal of this whole project is to have enough seeds through the growing season, that we can begin to return those seeds to the home communities in the diaspora.

Also included in the exhibit is a contemporary turkey feather cape created by artist Rebecca Haff Lowry. That type of cape, traditionally worn by both men and women, is also rare, Baker said. “So, again, it’s about the renewal, a renaissance, of our presence and culture here in Manhattan.”

The exhibit will run until April 20 and is free to the public. The library and the Lenape Center have also developed programs to complement it, including panel discussions on the history of the forced removals of the Lenape, the myth about the purchase of Manhattan, the seed rematriation project, and the crisis of missing and murdered indigenous people. The latter discussion, scheduled for March 7 at the Brooklyn Public Library’s main branch at Grand Army Plaza, will feature five speakers, including Cherokee attorney Mary Kathryn Nagle and longtime feminist activist Gloria Steinem.

You can register for those free events, some virtual and some in-person, here