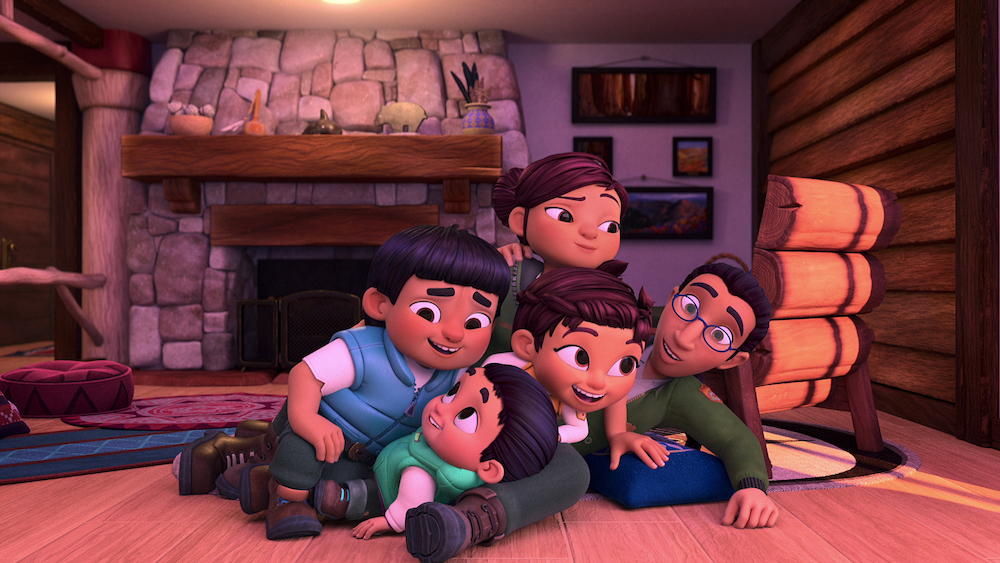 The celebration of Indigenous Peoples’ Day on Monday served as a potent reminder that Native people are still here and Indigenous individuals shouldn’t feel invisible.

That's a powerful message for all Indigneous people, but especially for younger Natives.  It is also, not coincidentally, a central message of the new Netflix animated series, Spirit Rangers, which debuted on Indigenous Peoples' Day.

The 10-episode fantasy-adventure preschool series celebrates nature, community, and the rich heritage of Native storytelling. The premise follows the three Skycedar siblings and their family of park rangers who look after the Chumash territory.

The kids have a secret. They can transform into “spirit rangers” to protect the park's nooks, crannies, and critters. With new perspectives as a grizzly bear cub, red-tailed hawk, and spunky turtle, the Skycedar kids approach every challenge — from helping a lost thunderbird to waking a sleepy sun — with courage and compassion.

Each 22-minute episode is divided into two parts that feature new storylines and character arcs. The episodes’ format presents park problems, family incidents, or events that interconnect with characters’ storylines in the spirit realm. The junior park rangers must find solutions to save the park, help their friends, or learn lessons to understand one another better. Some themes reflect specific Native issues, while most of the episodes teach kids how to be a good person.

It’s a refreshing take on a family-themed show with fantastical elements that happen to center around young Indigenous heroes. Their family dynamic creates a positive environment where the parents, voiced by Kimberly Guerrero (The Cherokee Word for Water) and John Timothy, show an enormous amount of faith and trust in their kids by giving them space to be themselves. Debut performances by Wačiŋyeya Iwáš’aka Yracheta (Kodi), Isis Celilo Rogers (Summer), and Talon Proc Alford (Eddy) truly bring these characters to life.

Representation matters, and it is prevalent throughout the show. Indigenous designs are literally infused into the environment and backgrounds with splashes of vibrant colors that culminate in innovative presentations.

Inspired by her own childhood memories and adventures with her sister, the show’s creator Karissa Valencia is a Santa Ynez Chumash tribal member. Valencia recognizes her Chumash ancestors as caretakers of the land and utilizes the show as a reminder that Native people are still here and Indigenous kids shouldn’t feel invisible.

“I’m forever grateful to Netflix Animation for trusting our team to tell our own stories and supporting us every step of the way. With their support, we’ve assembled the ‘Native Avengers’ of Hollywood with Indigenous writers, actors, composers, artists, choreographers, consultants, sound designers, and many more,” Valencia said.

Spirit Rangers is a prime example of Native creativity and Indigeneity. From the production team to the cast to the show’s general aesthetics, Netflix took steps in the right direction to showcase Indigenous talent and elevate different tribal nation perspectives and language.

Viewers will enjoy the charming whimsy, laugh with these adorable rangers, and learn about the nation specific lore. Check out the Spirit Rangers trailer here.