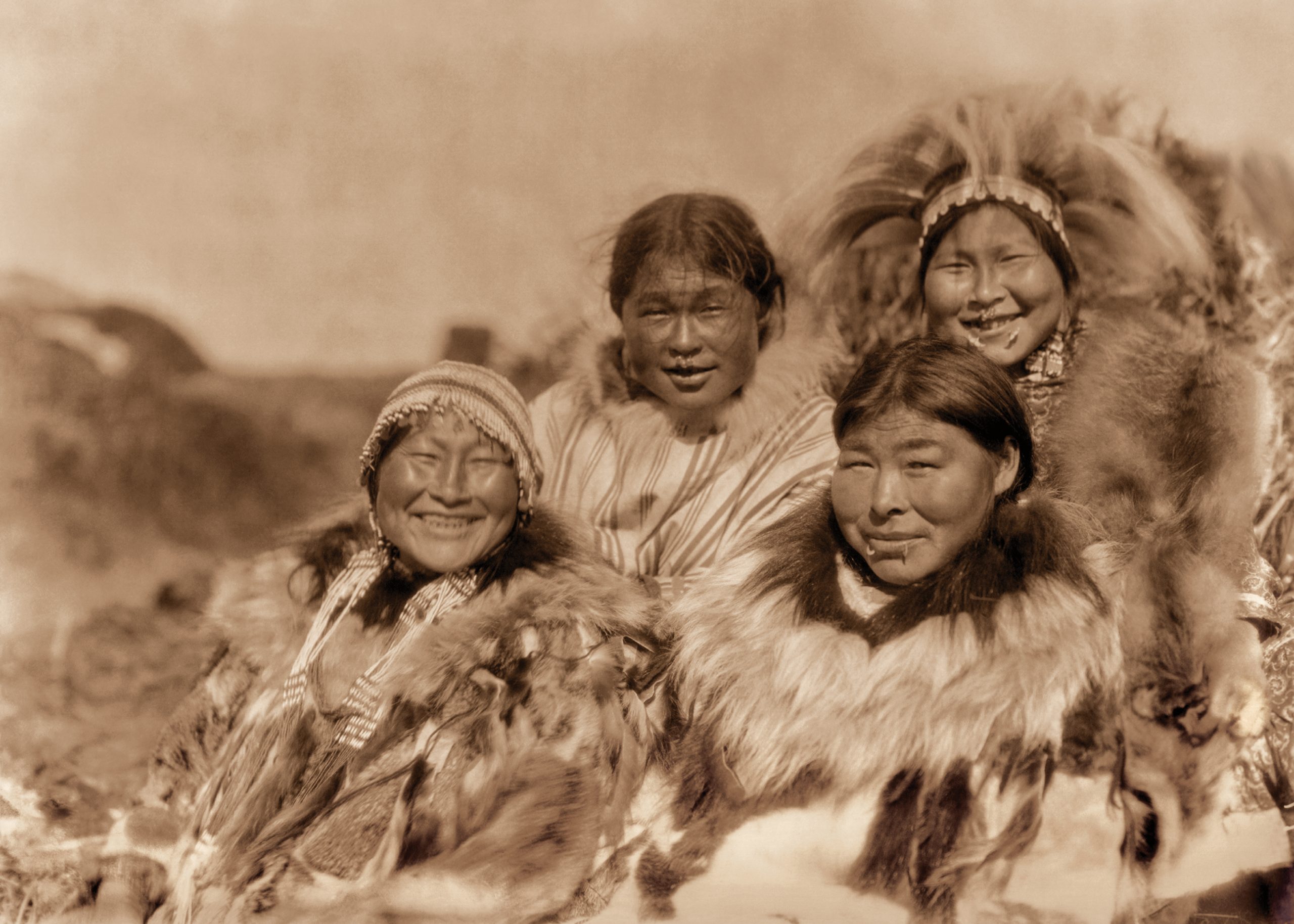 These glimpses into Alaska Native culture were captured in 1927, when photographer Edward Curtis traveled to Nome and the Bering Sea to visually and journalistically chronicle the lives and customs of the Indigenous people of areas including Little Diomede Island, King Island, Nunivak Island, Hooper Bay, King Island, and Cape Prince of Wales.

In collaboration with the tribes who welcomed him into their communities, posed for him, and shared stories, language, songs, and traditions, Curtis composed myriad photogravures while in Alaska, many of which are included in The Alaskan Eskimo, the 20th and final volume of Curtis’ epic life’s work: The North American Indian.

But even an epic needs editing, and dozens of photos didn’t make the cut.

More than 100 rare images excluded from the volumes are now being brought to light via the exhibit "Unpublished Alaska: The Lost Photographs," opening Thursday, Sept. 16 at the Muskegon Museum of Art in Michigan.

The photos, as well as unseen entries from Curtis’ journals, are also featured in an Unpublished Alaska book assembled by Curtis’ great grandson, John Graybill, and Graybill’s wife, Coleen. Both are also photographers.

The couple, and board members of the Curtis Legacy Foundation, which aims to continue Curtis’ legacy and amplify Native voices, are coming to the exhibit’s opening night. They will discuss Curtis’ project, and touch on topics including the complicated process of creating photogravures, and Alaska Native subsistence practices from the past and present.

The path of the previously unseen pictures started about three years ago, when John Graybill’s parents were preparing to go into assisted living. He and Coleen discovered a treasure trove of unpublished images in cubby holes, crawl spaces, and more unexpected places, while cleaning out John’s parents’ house.

“We started going through it, and Coleen realized that we had several hundred images from Alaska alone,” John Graybill said. “She started comparing those against what was in Volume 20. And we realized the biggest body of material that we had didn't appear in any of the volumes.” 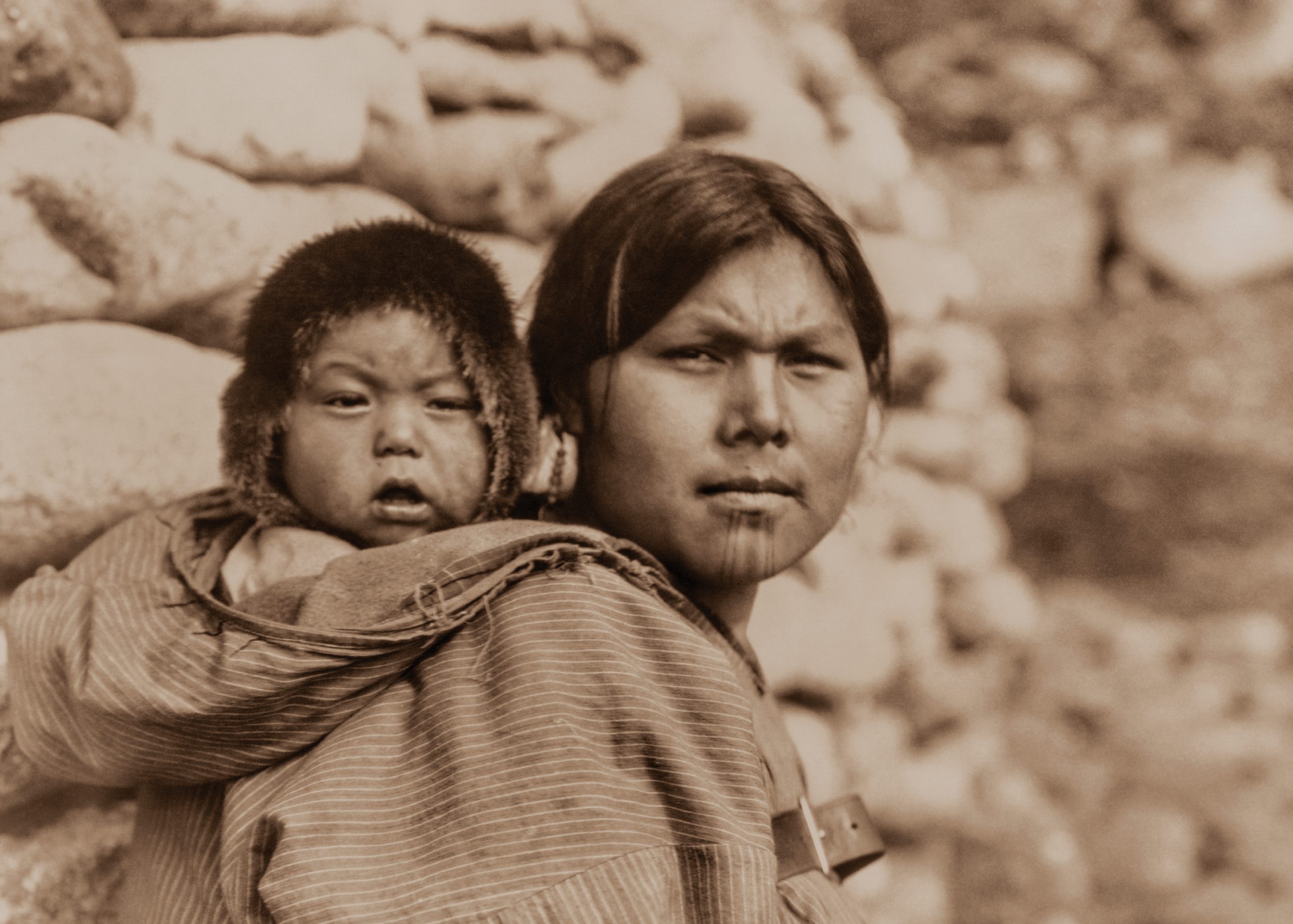 This photo of an Indigenous mother and child from the Diomede Islands is part of the new exhibition “Edward S. Curtis: Unpublished Alaska, the Lost Photographs,” running September 16, 2021 through January 9, 2022, at The Muskegon Museum of Art in Muskegon, Michigan. (Photo/Courtesy of the Curtis Legacy Foundation)The couple quickly concluded that the extra images  presented a more complete picture of Curtis’ masterwork and the cultures he sought to preserve, and needed to be taken out of hiding and shared with the public.

The Graybills have guesses as to why the recently discovered images weren’t chosen to appear in the completed volumes.

“Some of them are a picture of a person that may appear in volume 20, but it's a different angle, setting, or look,” John Graybill said.

With some of the images, it was fairly obvious why they didn’t end up in the pages of volume 20.

“Some of the  images have some movement in them or the focus isn't quite right. As long as they weren't horrible, we decided to put them in because we knew their families would love to see the image, whether it was out of focus or not,” Coleen said. She added that the new book and exhibition are “not just about showing these unpublished things of Curtis, but to share them with the people that have the most interest in it. That’s really important to us.”

As for the location of the show, The Muskegon Museum was the natural destination for the photos, according to Art Martin, the museum’s Director of Collections and Exhibitions and Senior Curator.

He said the museum, the Muskegon school district and the public library used to all be under the same parent organization, and the library was one of the first subscribers to The North American Indian, which initially sold for a few thousand dollars in the early 1900s. Today, the volumes are worth considerably more. In July, a complete set of the books fetched $895,000 at an art auction in Santa Fe.

In the 1980s, the Muskegon collection was moved to the museum for safekeeping, Martin said. Then, in 2014, the museum separated from the school district and library, and the ownership of the materials was up in the air until they were formally transferred to the museum with the understanding that the work would remain in the community, Martin said.

To celebrate and honor the acquisition, the museum put on a major Curtis exhibit.

“We showed the entire project — all seven hundred and twenty three photogravures,  the twenty volumes, and artwork from contemporary Native artists who were responding to Curtis.”

The show attracted nearly 35,000 people, according to Martin.

“Because it was such a monumental Curtis project, the Graybills  became aware of us, and made the introductions. And, from there we've kind of kept up the conversation,” Martin said. “They knew us, and they knew we had pulled off Curtis and that we've been very respectful of Curtis's legacy—but also just as, if not more importantly, we try to be very respectful of contemporary Native scholarship and contemporary perspective on Curtis; sort of taking the good with the bad.”

The “bad” to which Martin refers, stems from the disconnect between the timeframe when Curtis photographed his subjects, and his overarching vision and intention for his project. That disconnect has generated its share of controversy and criticism of Curtis through the years.

Curtis was trying to portray Native Americans and Alaska Natives as they were 200 to 300 years prior to contact with outside influences, and the steps he took to give the impression of pre-contact have come under fire from folks who think he was perpetuating primitive stereotypes and being inauthentic. 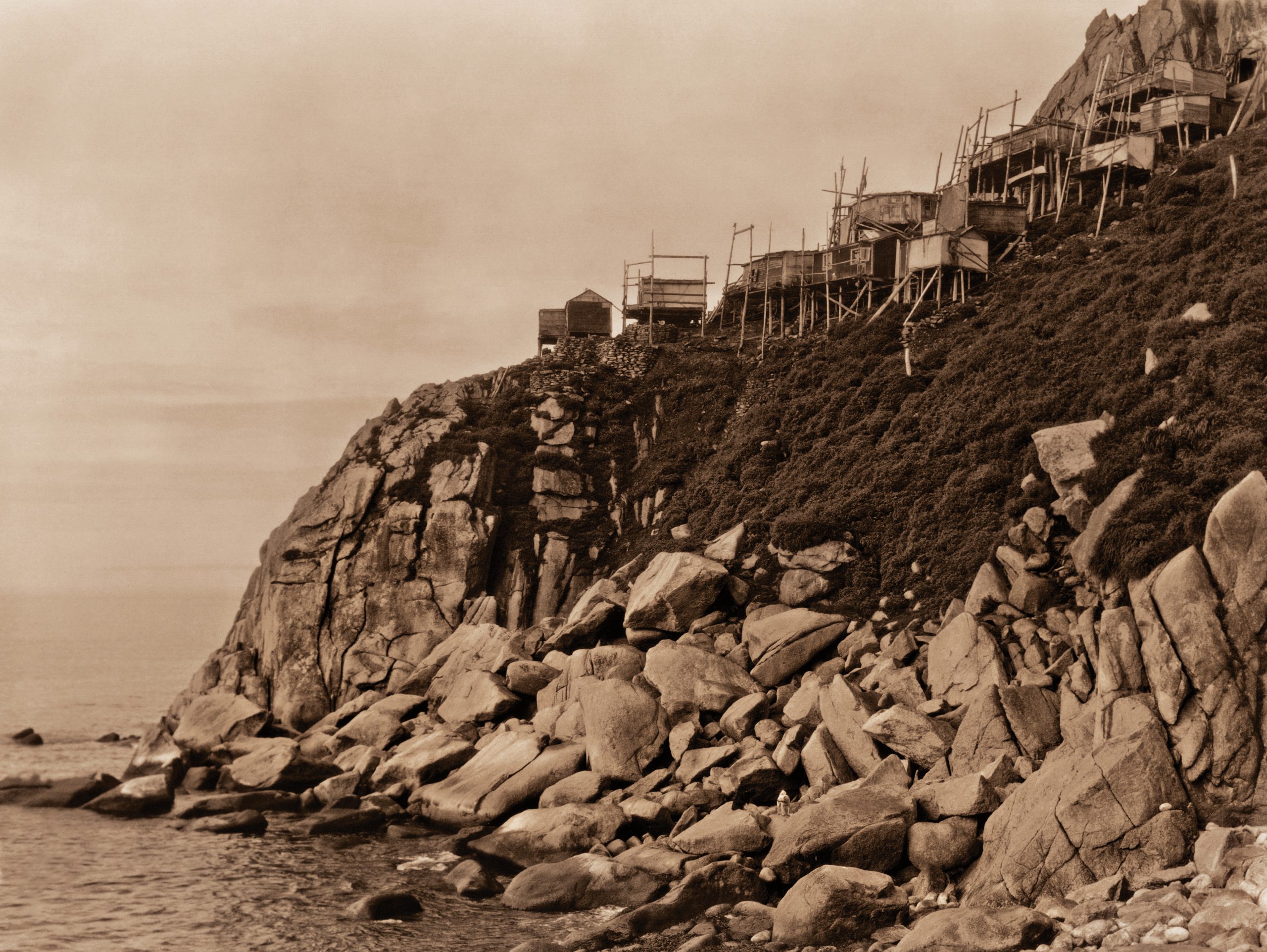 Native houses on stilts on Alaska's King Island. (Photo/Courtesy of the Curtis Legacy Foundation)For instance, Curtis would edit out objects, like clocks and contemporary modes of transportation, that tied his subjects to the modern world. He also staged ceremonies and dances and often had his subjects pose in regalia they wouldn’t necessarily wear, or was outdated.

Martin and the Graybills maintain that Curtis didn’t intend to deceive, and that his creative editing was part of his encompassing intention, which was ultimately to preserve and honor Native cultures and traditions before the elders who held the most information and wisdom passed on.

“It's hard to put contemporary sensibility to what was happening at the time, and there is genuine concern that this is a white man telling someone else's story,” Martin said. “But on the other hand, it is a piece of history and Curtis is reporting what he was given.”

The problems critics and other observers have with Curtis did not result from a lack of respect or interest in his subjects, or failing to honestly communicate his intentions to them, according to Martin and the Graybills.

John Graybill said when Curtis came to an encampment or village, he didn’t just rush in, get the images he needed, and head on to the next adventure.

“Whenever he went to camp, the first thing he did was seek out who of the elders had the regalia and that's what they would use in the photographs,” John Graybill said. “He gathered information from interviews with the elders. He was in this race against time to learn about all aspects of the culture and then make the photographs based on the information that's been presented to them. That's kind of the context of how he was making these photographs, and this issue about posing. “

While reviewing and assembling the unpublished images, the Graybills were particularly drawn to certain shots. 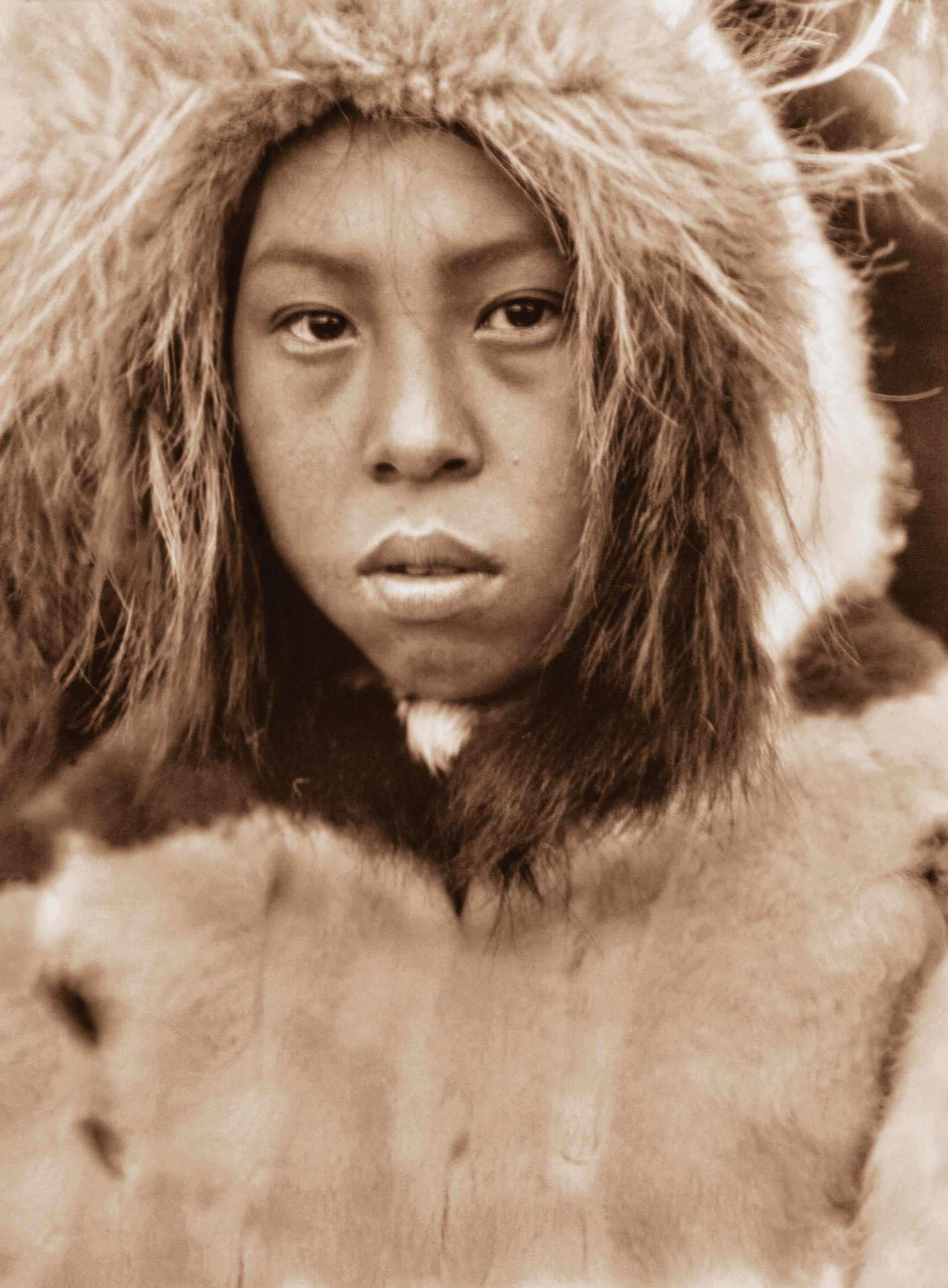 A native from Cape Prince of Wales in a fur parka. (Photo/Courtesy of the Curtis Legacy Foundation)John said one of his favorite images depicts a gentleman dressed in the Russian style, holding a kayak frame.

“It's just beautiful woodworking,” he said. “It shows all the framework before the skin on it was removed. I just think it's cool.”

Coleen Graybill said she was captivated by a picture of a little Inupiaq girl standing on a log, wearing a fur coat and an adorable smile.

That little girl is Anna Nashoalook Ellis, who is now 97. Although there are pictures of her in Volume 20, Coleen said the Graybills were only able to find her and her family after they started sharing some of the unpublished pictures.

“We just had her come to one of our presentations about a month ago and she told stories of growing up in Alaska,” Coleen said.

Ellis figures prominently in the Graybills’ own “Descendants Project.” For this continuation of Curtis’ work, the couple are finding and photographing as many of the surviving original subjects and their relatives as they can. The new images, which include present-day photos of Ellis taken by John, will eventually be published in a coffee table book.

For the Graybills, it’s a thrill to meet the originals and the descendants as they bring Curtis’ passion into the present.0

“I got to photograph the same person my great-grandfather photographed,” John Graybill said.  “It just blew my mind.”

The exhibit “Edward S. Curtis: Unpublished Alaska, The Lost Photographs” opens at the Muskegon Museum of Art on Thursday, Sept. 16 at 5:30 p.m. with a reception that is open to the public.  The exhibit runs through January 9, 2022.  For more information, visit https://muskegonartmuseum.org/ or call 231-720-2570.