One Down, 500 to Go: Native Nations Contextualize their Own Artifacts at New York Museum 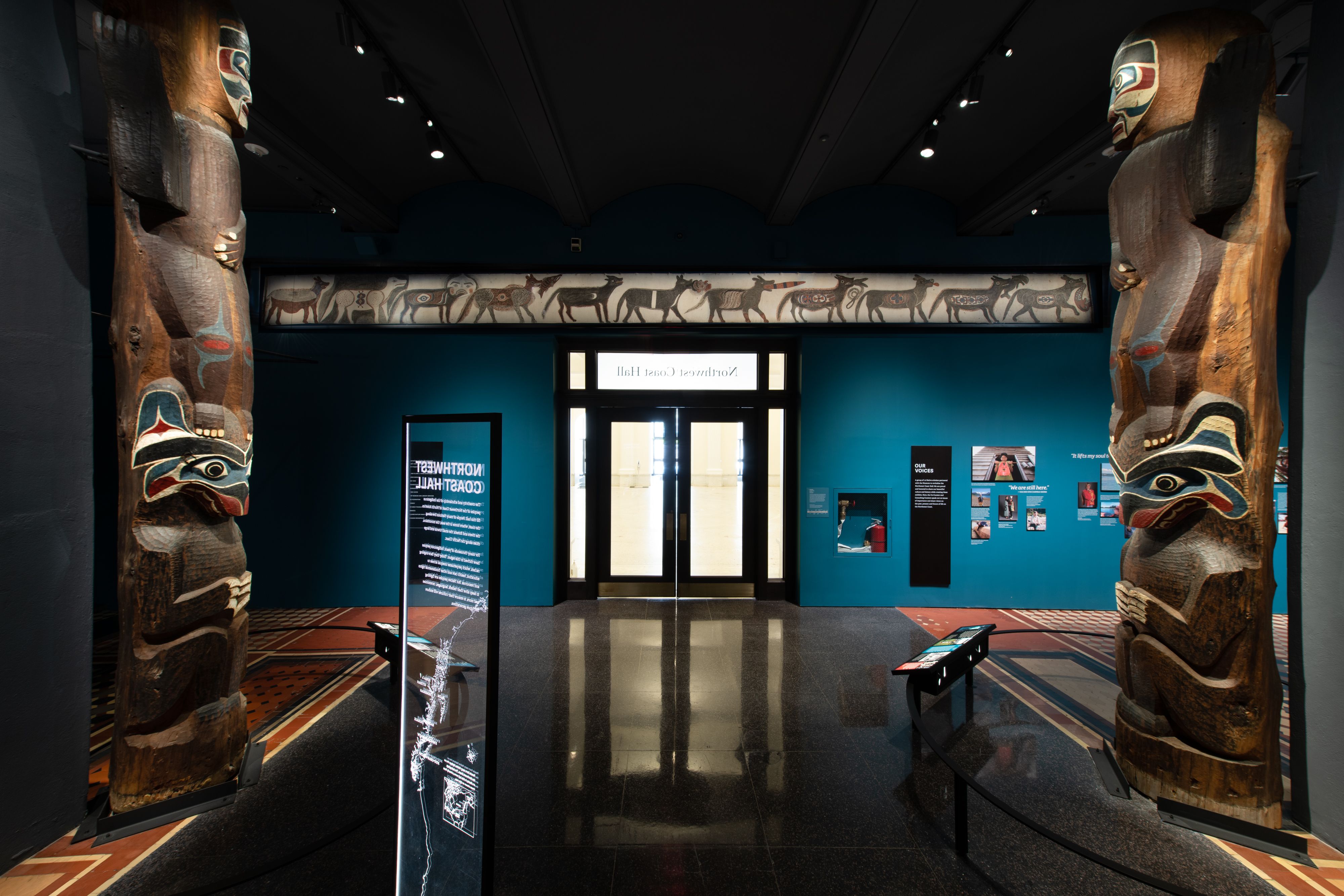 NEW YORK—Thirty years ago, David Boxley (Tsimshian), an Alaska Native carver and dancer from Southeast Alaska, was stopped in his tracks at the entrance of the Northwest Coast Hall at the American Museum of Natural History in Manhattan.

He felt a palpable energy emitting from the sacred objects that had been taken from his people and related Indigenous tribes along the Pacific Northwest coast and then displayed inside the hall, the museum’s oldest permanent exhibit, opened in 1899.

But on May 5, Boxley stood in the newly reopened hall wearing his traditional Tsimshian regalia, presenting the Tsimshian exhibit he’d had a hand in reinterpreting — from the Native perspective.

“Now look at it, all of our consultants have had such good input into this so that [visitors can see] we’re alive and well,” Boxley told Native News Online. “Or, at least we’re alive, and we’re getting well. Our own people are much more knowledgeable about ourselves and the pride [we feel].”

Traveling with him were his wife, their son, and their five-year-old grandson, who will grow up with a different reality.

For the last five years, the Northwest Coast Hall has been closed for renovations. During that time, Peter Whiteley, the Museum of Natural History’s curator of North American ethnology, and co-curator Ḥaa’yuups (Huupachesat-ḥ First Nation) worked with 10 Indigenous consultants to to recontextualize the exhibit with a first-person Native perspective. The 10 consultants came from the Coast Salish, Gitxsan, Haida, Haíłzaqv, Kwakwaka’wakw, Nuu-chah-nulth, Nuxalk, Tsimshian, and two Tlingit communities. Each culture is now represented in its own alcove within the hall, which includes translations in each language and introductions to distinct traditions, music, histories, and interconnected themes from the surrounding Northwest communities.

Not only does the new hall feature focus on the “living cultures” of Indigenous tribes and First Nations of the Pacific Northwest Coast, but it doesn’t shy away from the damaging histories of Indian boarding schools and the U.S., British, and Canadian governments’ efforts to eradicate Native people, the crisis of missing and murdered Indigenous women and girls, and the colonial nature of museums.

Judith Ramos (Yakutat), a consulting curator from Yakata, Alaska, worked on an exhibit about traditional Tlingit doctors, or shamen, which includes specific history of how the museum came to acquire the sensitive and powerful objects.

“It's really important to talk about the grave-robbing,” Ramos told Native News Online, pointing to a sign on the wall next to a glass exhibit holding sensitive shaman artifacts and information. “This is my ancestor, Teik’eesh,” she said. “Something they have in this museum is his headdress, so talking about how these objects were taken from grave houses was real important. These items came to be in this collection by the robbing of grave houses by George Emmons.”

Emmons, a U.S. naval officer who lived in Sitka, Alaska, sold those items to museums around the world, says a new sign on the wall behind the shaman exhibit.

A changing tide with museums

Many of the Indigenous consultants and their relatives present for the press preview of the hall on May 5 remarked on how the nature of museum work has changed in recent years.

“Indigenous peoples and museums have not always had the best relationships,” said Morgan Guerin (Musqueam Indian Band, Coast Salish). He told how he first saw the Museum of Natural History on a FaceTime call from his daughter in 2016: She was visiting the museum and called him in alarm when she saw her family’s sacred regalia displayed on the walls in the Northwest Coast Hall.

A year later, curator Whiteley asked him to participate in the recontextualization of the exhibit. Guerin took his family's sacred regalia down from the wall himself, along with other sensitive cultural objects that were on display.

“We've actually limited the collection to choose the story we want to tell, rather than the sexy stuff that people come to see, but that actually has someone’s spirit attached,” he said.

Museums changing their behavior to treat Natives as partners, rather than as subjects, has been a generational process, Guerin said. Thirty years ago, two powerful aunties from his community asked the Museum of Natural History to take down the sacred regalia, and were denied.

“It's really changed, the way that the conversation is even approached,” he said. “They came to us. It's not us having to go from museum to museum, although that is still true. The museum [having us] tell our story is truly a legacy piece of reconciliation, and… should be a monument to all the other museums around the world. So one down, 500 to go.”

“The tide is moving in this direction in museology, and it's a beautiful thing,” he said. “It's been wonderful working alongside everybody here and being treated as a human in this continent in the colonial world that hasn't been treating us that way for about 200 years.”

The elephant in the room during the May 5 press conference was the Museum of Natural History’s consistently poor track record in returning the Indigenous human remains and cultural objects it has in its collection.

“They measured our skulls to see how smart we were,” Boxley said of the since-debunked 19th century practice of cranioscopy. “It makes you feel like they didn't think at the time we were humans. We were just another object to study. That’s kind of yucky.”

Although the museum last week approved the voluntary return of an unknown number of cultural objects — beyond what’s required by federal law, according to Whiteley — it still has 1938 human remains and 4,085 associated funerary objects in its storage, including the ancestors of many of the tribes and First Nations present in the Northwest Coast Hall.

“In some ways, that’s fine for now,” said Guerin. “So long as the conversation is, how are you caring for them? It takes time to prepare to do what's right. There are nations that wouldn’t even have the capacity for… 500 ancestors. But when we are ready, that conversation should not be a hard one.”

For First Nations in the Pacific Northwest, that conversation will also include changes to American law, since the federal law requiring institutions to return Native American human remains and certain cultural objects does not extend to Indigenous peoples across international borders, such as those in Canada.

“We get these long-term loans [of artifacts], which are fine for possession purposes, but realistically, it's not speaking to actual healing and reconciliation,” Guerin said.

A message of hope

Each Indigenous curator expressed feelings of satisfaction at their progress, but also awareness of the work that remains to be done.

“During our first convening for Native advisors in 2017,” Whiteley said, the Coast Salish made an explicit request: “‘Those things need to be taken off display, and they need to be curated in collections in a certain kind of way until we’re ready to make a repatriation.’ So we did that. So you won't see any masks in that section at all. Other nations feel differently.”

Megan Humchitt (Heiltsuk Nation), the daughter of cultural consultant Harvey Humchit, told Native News Online that her heart feels happy for the work her Indigenous relatives contributed to, but also sad that her ancestors’ spirits are still attached to items in the museum, such as masks, and not home with their people.

“Usually, when [the masks] are not being danced, we wrap them in blankets, because they have to sleep,” she said. “We think that the museum is getting there in understanding who we are as a people and a living culture, not just the past. I hope that we’re on that path.”

This story has been updated to correct Morgan's last name to Guerin and Ramos' tribe to Yakutat, and to correct the number of human remains. We regret the errors.