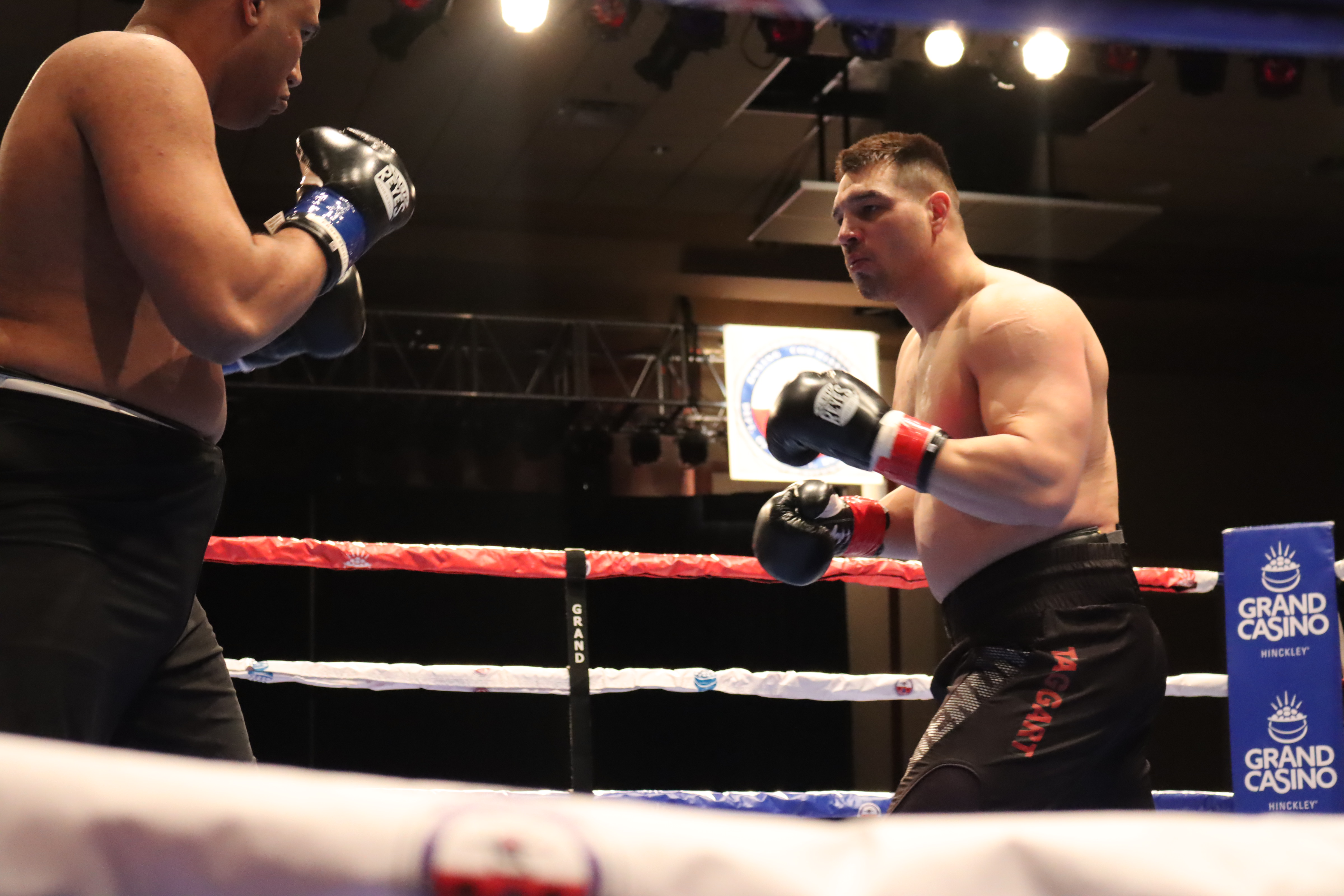 Hinckley, Minn.—On Friday, February 18, the Grand Casino Hinckley hosted “Grand Friday Night Fights,” a popular casino professional boxing series that has been showcasing amateur and professional fighters since 2007. It’s considered one of the top casino boxing series in the country.

Taggart, a local trainer who works with youth in the community, was defeated by Cuba-born, Minneapolis-based Denny Reyes, in a heavyweight fight that brought out many locals as well as others from out of state.

Joe Pecore, a former professional cruiserweight boxer from the Stockbridge-Munsee Band of Mohican Indians in Wisconsin, traveled nearly 300 miles with his family from Stevens Point to support fighter Marcus Oliveira. He told Native News Online that he traveled the distance to show his son and nephew professional boxing at a renowned venue. Pecore, inactive like many other fighters due to the pandemic, is anticipating fighting this summer at another Indian gaming venue in central Wisconsin.

Tribal athletic commissions recognize showcasing local talent brings not only the local community, but a lot of excitement as well. “There is so much energy around a show with a Native fighter,” said Matt Roberson. “Native fighters definitely bring a lot from our own community that probably wouldn’t be there otherwise.”

“Hinckley was insane last week,” Roberson said of the fights. “It really has a vacuum like the big shows and that’s why managers fight so hard to get on the cards at Grand Casino Hinckley—to get them ready for the big show.”

Friday’s fights were opened with a flag song by Little Otter, a championship traditional Ojibwe drum group from the Mille Lacs Band of Ojibwe, to a crowd of at least 2,500 people.

“Friday’s event went great with near flawless execution,” said Mille Lacs Band of Ojibwe’s Department of Athletic Regulation’s Executive Director Matt Roberson to Native News Online. “Our team takes a lot of pride in the work and that’s why we are considered one of the top athletic commissions around.”

According to the Mille Lacs Band Department of Athletic Regulation’s website, “it [DAR] licenses combatants, trainers, managers, matchmakers, ringside physicians, and officials, and also regulates combative sports on the Mille Lacs Reservation according to the rules and regulations of the Department.” The Mille Lacs Band of Ojibwe’s athletic commission is a member of the National Association of Boxing Commissions and International Association of Combative Sports Commissions and is proud that its entire staff is Native American.

Grand Friday Night Fights is promoted by the Grand Casino Hinckley in partnership with Rapacz Boxing and commissioned by the Mille Lacs Band of Ojibwe’s Department of Athletic Regulation.

On March 12, the Mille Lacs Department of Athletic Regulation is regulating Throne MMA, an 11-fight ticket at the Northern Lights Casino owned and operated by the Leech Lake Band of Ojibwe in Walker, Minn. Throne MMA is owned by White Earth Ojibwe Tribal member Dean Lamb and will feature several Native fighters. Tickets for the event are already sold out.