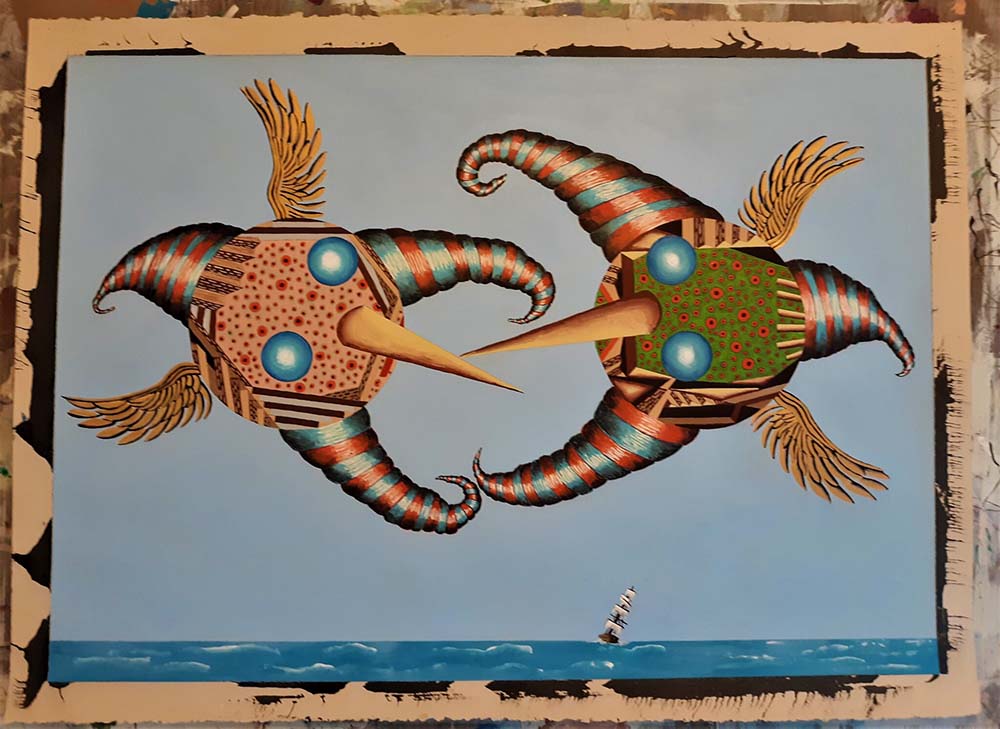 Over the past few weeks, the Museum of Wisconsin Art (MOWA) in West Bend has opened two new exhibitions by indigenous artists to the public.

Curator Graeme Reid says MOWA has worked with Jones for the past 13 years, and that a constant thread in Jones’ work is the interaction between white and Indian culture. Jones’ series “Studies in Cultural Appropriation” examines the fashion industry’s use of Native American designs. It includes an image of a white man and white woman, with  the outline of the man’s clothing cut out. The space is filled in by laying the card over Native objects such as beadwork, cloth and weavings.

“There’s something that a friend of mine said once,” says Jones, a professor of photography at the University of Wisconsin-Madison. “She came to a show, and she’s like, ‘Your work is so beautiful, but then when you really look at it and get up on it, it slaps you in the face.’”

Both Jones’ exhibition and White Earth Nation painter Tom Antell’s paintings deal with the legacy of their tribes’ lost land.

“It’s an odd thing because someone could look at that painting and just see it as a painting of a plowed field,” Antell said. “But when you understand that it was painted by a Native American, it probably is going to take on a different context.”

Jones said his exhibition’s name refers to how Ho-Chunk people were removed from Wisconsin by the United States government and later returned.

“And so I decided to say, ‘Here We Stand’ to let people know that we are still on our original homeland,” Jones said.

Jones’ work has been featured in the Smithsonian’s National Museum of the American Indian and the Museum of Contemporary Photography at Columbia College Chicago. He’s been photographing his tribe since 1998, and he’s not sure he would have the same access to their homes if he wasn’t a member of the community. 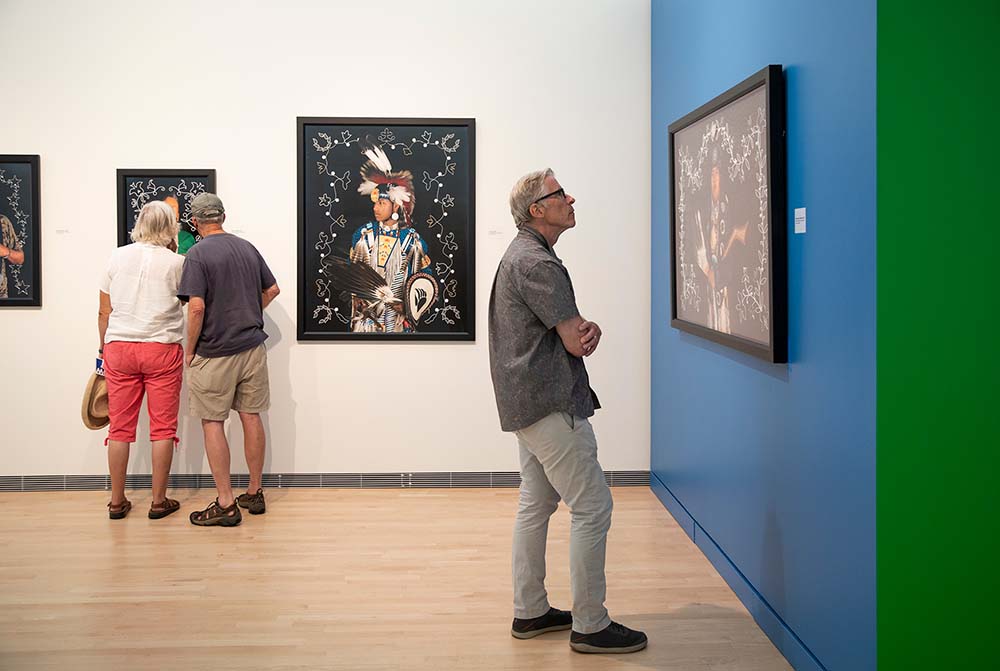 In his photo series “Strong Unrelenting Spirits,” Tom Jones incorporates beadwork directly through the photograph. The beadwork surrounding the person in the photo on display here “represents our ancestors and spirits that are watching over us,” Jones says. (Photo courtesy of the Museum of Wisconsin Art)

Reid has described Jones’ photography as “firmly anchored in the present day,” adding that it “offers a counter-narrative to the traditional depictions of Indigenous culture.” Some of his photos, Jones says, display his subjects’ identity through an item, such as a bear tapestry or a plaster deer sitting on a television console.

“Whenever you see those animals, even [in] contemporary ways, in their clothing is letting you know they’re from a specific clan or group,” he said.

For one series, Jones took postcards of Native Americans that he had been collecting since the 1980s and added lines from the song “My Country Tis of Thee,” he said in a video posted by MOWA.

“But I saw it as a kind of a form of propaganda for myself to expose the history — I guess the real history of Native America — to get those things and to educate people about who we are,” Jones said.

Jones said his exhibition includes a memorial for deceased veterans: an assembled grid of photos, each capturing a photo that a veteran’s family laid out at a flagpole at the Memorial Day powwow. He eventually plans to create a book with photos from this series dating back to 1999.

“[There are] some [photos from] when they joined the military, so it’ll be in their uniforms, or it could be in dance regalia, it could be a grandfather with a grandchild, so there’s just a real mix of how they’re represented,” Jones said. “It’s how the families want them represented. And that’s what I’m interested in.”

‘A horn of destruction’

Tom Antell’s first-ever exhibition opened at MOWA on July 16, titled “Strange Lands.” Antell says that a series of his paintings depicts sailors who are complicit in the conquest and colonization of the Americas. The sailors’ appearance reflects the presence of disease and the changing American landscape, and their caps take on multiple meanings.

“I invert the cornucopia, [and] it becomes both a tornado and a sailor’s cap. So it has multiple dimensions,” says Antell, 68, who lives on the Lac Courte Oreilles Reservation in northern Wisconsin. “And then it’s the whole idea [of] the promise of this land of plenty, this land of thanksgiving, and what actually came out of that. That’s why it becomes a tornado as well. The horn of plenty is actually a horn of destruction for Native Americans.”

Antell says that his grandfather and other relatives attended the federal Indian boarding school system that worked to assimilate indigneous peoples. He is working on a new series of paintings about Native American identity, which may relate to the schools.

“Like, what does it mean to be an Indian at this time?” asks Antell, who used to teach Native American studies at the Lac Courte Oreilles Ojibwe College. “Because obviously, the traditions of an Indian from 400 years ago are going to be different than the traditions of the contemporary Indian.”

Starting October 7, the Museum of Wisconsin Art will show work examining “essential conflicts surrounding Native American identity” at its satellite location in Milwaukee. This will include more work from Antell, and work from artists Sky Hopinka and Chris Cornelius.

Jones also speaks about his work and shows some of his photographs in a series of YouTube videos posted by MOWA. Antell and Jones’ exhibitions will stay open at the museum in West Bend until October 9.

This piece originally appeared in the Wisconsin Examiner. Republished by Native News Online under Creative Commons.