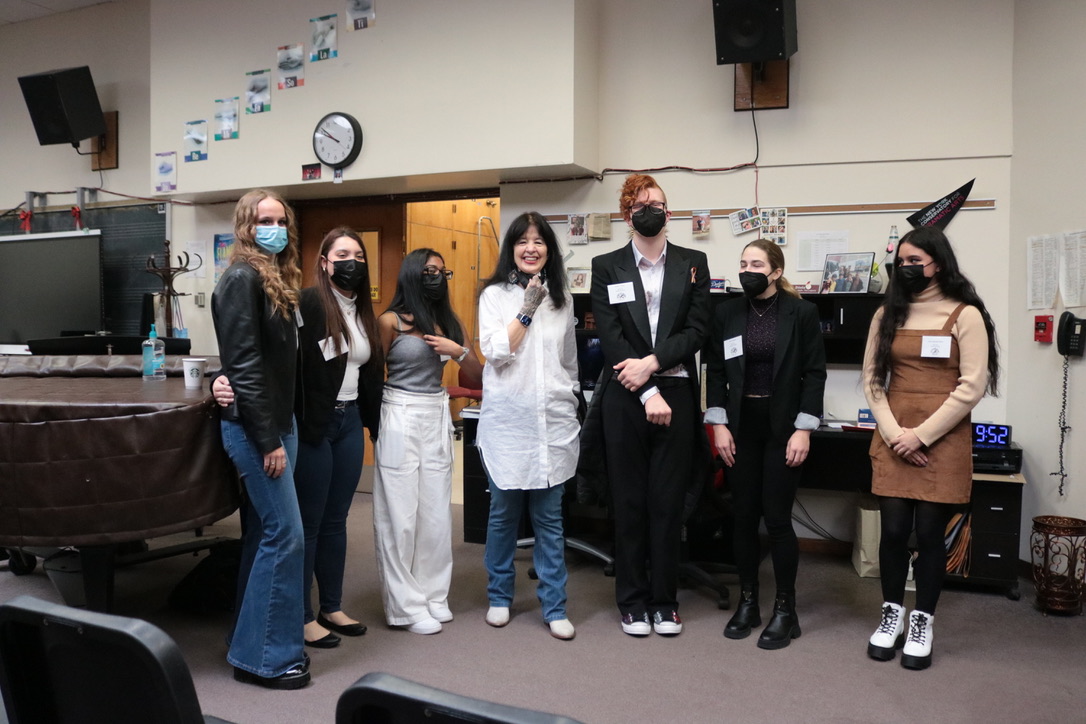 BAY SHORE, New York — U.S. poet laureate Joy Harjo (Muscogee Creek Nation) speaks directly to students at Bay Shore High School. Harjo gave the keynote address on Friday as part of the Long Island school’s 2022 Ethnic Pen Writers Conference. Organizers of the conference choose an artist of color each year to build curriculum around, leading to a meeting with that artist, as a way to serve the school's student population, about half of which identifies as Latino.

On Friday morning, Harjo read for the high schoolers a selection of handpicked poems, each contributing to an apparent throughline of resilience, identity, justice, and her own grapplings as a young person growing up in what she described as a racist world.

In one poem, Harjo described a moment in her life when she learned to pay attention to her instincts, after first ignoring them as a young girl invited on her first double date with a man ten years her senior.

“I read that because I want you to know that whatever happens, it's up to you, ultimately, how you respond,” Harjo told the teens. “And how you take these stories that you get confronted with every day. There was a point in my life where I was very suicidal, and I realized that what I had to do is to turn the stories around and see them from another point of view. They weren't necessarily meant to destroy me. They were meant so I could develop spiritual muscle—and that just began to turn the story around.”

Harjo told students that, when she was growing up—and even as a graduate school student in the 1970s—she was often dismissed for being Native.

“You guys get to hear a lot of different poets,” Harjo said. “When I was coming up, it was usually old white guys from England—and some of them were really good poets—but it was when I heard for the first time Natives writing poetry, I thought, wow, I can write from our community. And that changed everything.”

Friday’s conference also included student engagement, including an a cappella group’s performance of Soon I Will Be Done With The Troubles Of The World by Mahalia Jackson and a performance arts reading from an excerpt from Harjo’s An American Sunrise.

One student asked Harjo how she stays true to herself.

“That's a constant evaluation,” Harjo responded. “Sometimes my poems teach me things. I don't always know what's going to happen.” For example, Harjo said, she wrote a poem in her hotel room the day before and read it aloud at the podium from her iPhone.

She hadn’t planned to write a poem, she said. She was reading the New York Times in her hotel room, the rain falling hard outside, when she saw an image of an abandoned loaf of bread on a park bench in the Ukraine, backdropped by a pool of blood. Two innocent civilians in the park were killed in a surprise mortar strike in Kharkiv.

“It was that hemorrhage that stayed with me: these two people who were just sitting there trying to make a normal life and— just gone.”

The Bay Shore High School junior who introduced Harjo, Rainer Pasca, told Native News Online that he most enjoyed Harjo’s writings for their connection to the world.

“I think that a connection with nature is a really beautiful thing,” Pasca said. “I also read poetry. So I aspire to write with a connection to what is around. So to hear that is really inspirational.”

The programming was supported by a National Endowment of the Arts grant, secured by local nonprofit Teatro Yerbabruja. Teatro Yerbabruja, founded in 2004 by Puerto Rican Taíno artist Margarita Espada, is dedicated to enhancing arts programming for traditionally marginalized Black, Indigenous, and communities of color on Long Island.

Espada said her organization selected Harjo’s work out of a lineup of about ten other artists because it allows for a look into the history of Long Island’s Native communities, including those from Latin America who have immigrated to Long Island.

“I wanted to bring the conversation about Indigenous people in Long Island at large,” Espada told Native News Online. “We are indigenous, as latinos, but nobody is talking about that. At the same time, being a Long Island resident for more than 20 years, I never had the experience of really interacting with Native American people. I wanted to pick this book to build this conversation (and)  to educate my community and other communities.”

About 50 miles east of Bay Shore, the closest federally recognized tribe, the Shinnecock Nation, is still battling the wealthy Town of Southampton to preserve and protect their ancestral homelands against over development.