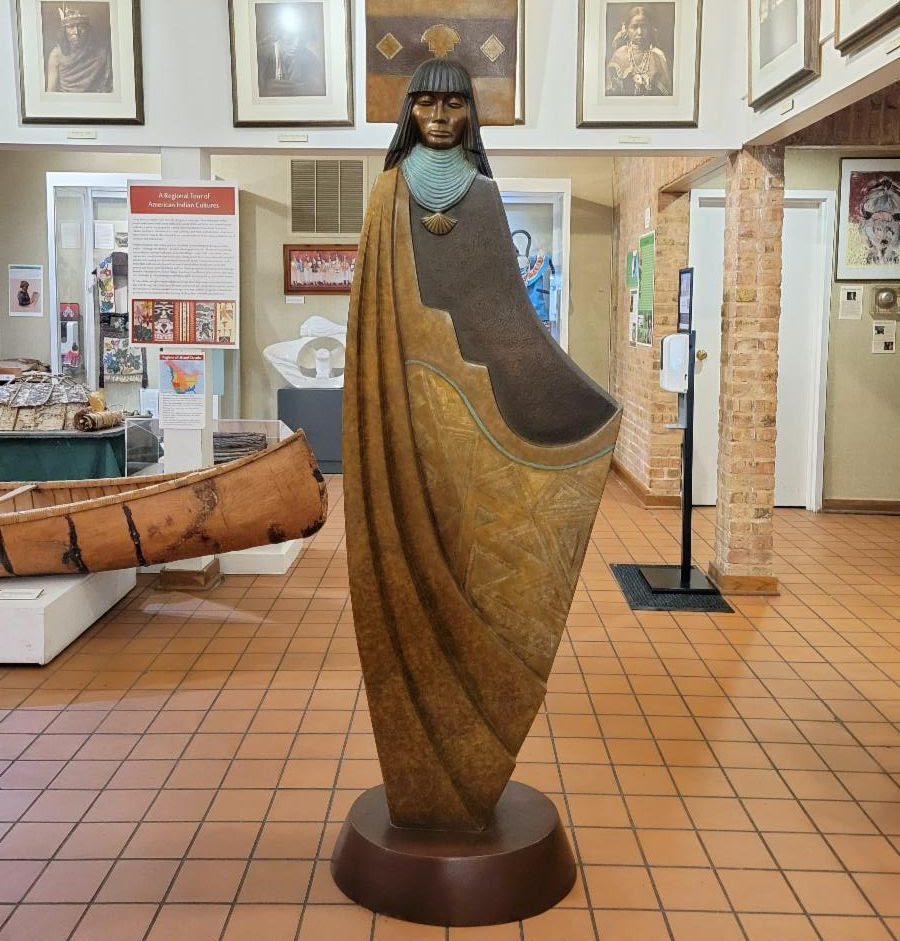 EVANSTON, Ill.—When a young Cliff Fragua (Jemez Pueblo) began chipping away at a soft stone for the first time four decades ago, he envisioned something beautiful and provocative that would stun the art world.

An hour into the process, he came across a large fissure and watched as his efforts crumbled into pieces.

Disappointed but not deterred, Fragua continued with a partial piece until the form revealed a bear. It was not what he had set out to create, but it’s what he had to work with and he was still able to make it his own.

Nearly 40 years later, Fragua’s stylized sculptures are nationally and internationally celebrated. He is the only Native sculptor to have his work installed in the National Statuary Hall in Washington, DC. His seven-foot-tall Tennessee marble sculpture there represents Po’pay, the leader of the 1680 Pueblo Revolt against the Spaniards.

Initially, Fragua received criticism for including Po’pay. However, he believes monuments should convey “the accomplishments of humans who have advanced the world to help them live  healthy lives. And honor the history of those originally from the area and be inclusive of those that come after.”

These sentiments are shared by various institutions around the country with some going a step further by reassessing former acquisition practices and Native cultural representations.

On Saturday, Aug. 14, the Mitchell Museum of the American Indian in Evanston, Ill. will reopen with a new repatriation exhibit and unveil a newly acquired sculpture by Fragua. Child of the Clouds is a seven-foot-high bronze statue that shows the beauty, power, and grace of Jemez culture. It will be unveiled during a community event on August 12th for its first public appearance at the museum.

Established in the late ‘70s, the Mitchell Museum is one of a handful of museums across the country that focuses exclusively on the history, culture and art of Indigenous peoples from throughout the United States and Canada.

With its new exhibit, Reclaiming Cultural Treasures, the museum is hoping to delve into the challenges and impacts of repatriation. For Indigenous peoples stateside, this is a sensitive and complex issue. The Native American Graves Protection and Repatriation Act of 1990 (“NAGPRA”) outlines how tribes can request the return of their ancestors’ remains and sacred materials, but some institutions aren’t always compliant. There are some success stories like the return of Chief Red Cloud’s eagle feather bonnet in 2020, and the exhibition will shed a light on these thefts and the barriers that need to be overcome.

“In this time of racial reckoning, there is a renewed interest in the Indigenous peoples of North America, and the Mitchell Museum is one of only a handful of independent museums in the country where visitors can learn about the past, present, and vibrant future of Indigenous peoples,” claimed Mary L. Smith, interim executive director.

“We are very excited the day has come that we can welcome our community back to the Mitchell Museum to reconnect in person with our extraordinary collections and experience the beauty of our new installation, Child of the Clouds,” Smith said.

Child of the Clouds was gifted to the museum by the late Joe Zeller, an avid Native art collector and friend of Fragua. In 2000, Zeller opened the River Trading Post in Scottsdale, Ariz, to sell authentic Native-made artwork, including Fragua’s sculptures. 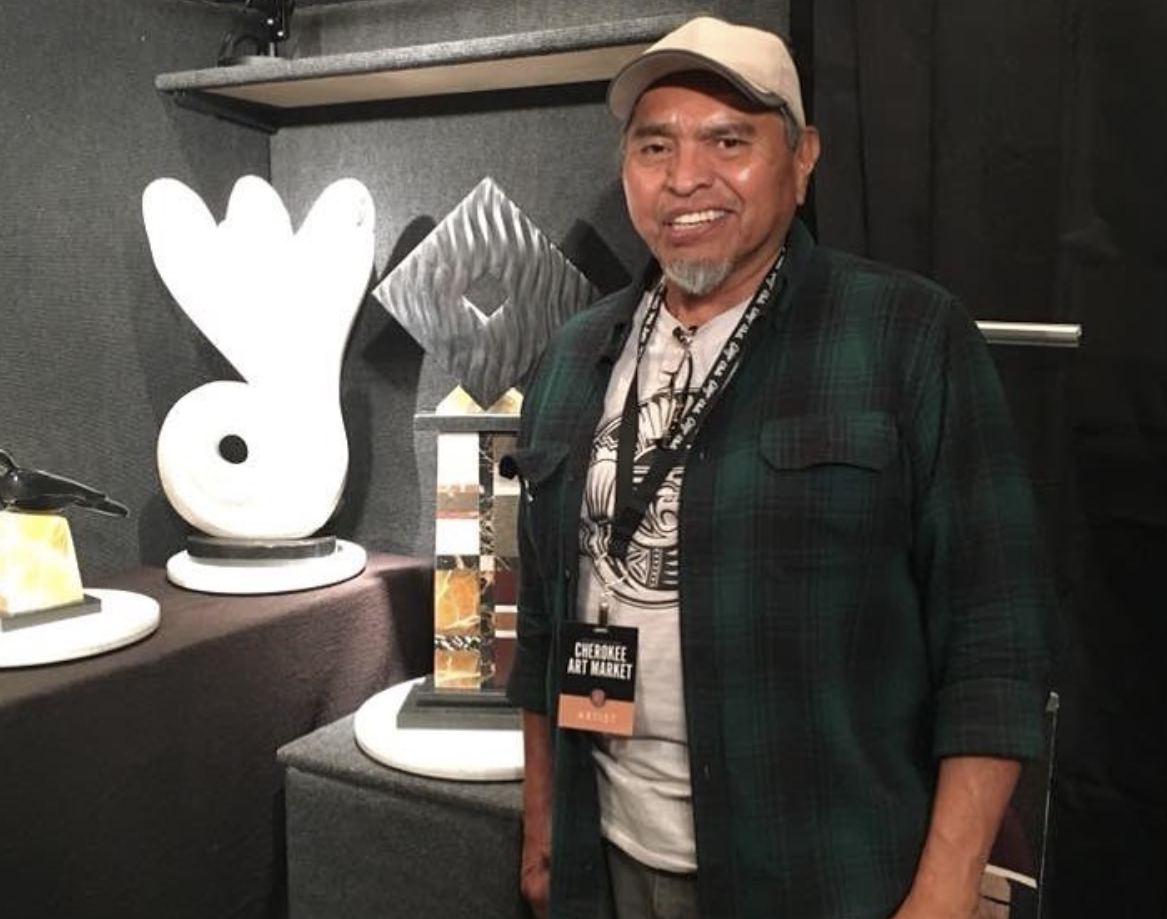 Cliff Fragua, Jemez Pueblo sculptor. (Photo/Courtesy of Cliff Fragua)“I look at the sculptures as my children. My job is to help reveal its soul and find a good home for it,” said Fragua, who understands the necessity of creating a sense of home.

During his youth, Fragua was part of the Urban Relocation Act. His family moved to St. Louis after his father found a carpentry apprenticeship there that led him to work on the Gateway Arch. The family bounced back to the Rez, but later his father’s career sent them to San Francisco. While this created a disconnect between Fragua and his Pueblo community, he still held onto his cultural identity, especially through art.

He attended the Institute of American Indian Arts (IAIA) in Santa Fe, NM, to study painting but found a new love for stone after enrolling in a sculpture class. Fragua later transferred to San Francisco Art Institute and trained in Italy, where he developed his signature style of layering, pinning, laminating and polishing multi-stone pieces. Whether he’s working with stone, clay or bronze, his artwork reflects traditional Jemez Pueblo themes and imagery

“I’m old school, I like to use my hands and hand tools. Generally, I work the direct carving approach,” Fragua said.

After refining his techniques and earning recognition in the artistic world, Fragua settled back in Jemez and continues to work out of his own Singing Stone Studio. Fragua is reestablishing his connection to his community and fights against lateral oppression.

In 1990, he was influential in founding the Towa Arts and Crafts Committee — a.k.a. the Jemez Arts and Crafts Association — to help local Jemez Pueblo artists. By providing shows and venues, these artists were able to regularly sell their work and build a vibrant art economy. Fragua continues this line of thinking and teaching by helping other Indigenous communities set up their own associations and passing along his sculpting knowledge.

“You do what you can, learn as much as you can and share what you’ve learned, so hopefully people can see a whole new perspective,” Fragua said.

Click here for more information regarding this event and the Museum’s new safety protocols.