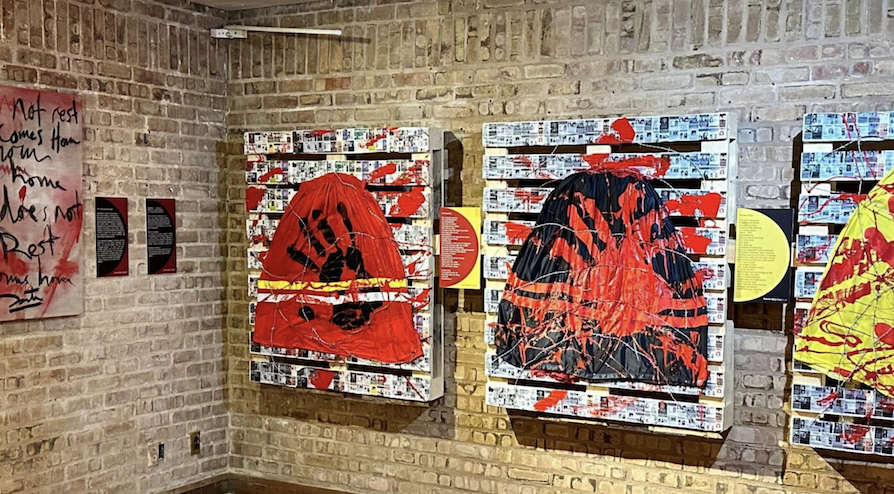 This week and next, there’s an abundance of Indigenous arts and culture going on in Indian Country.

For starters, there’s the 41st Annual Colorado Indian Market, which is back in Denver this year.  Plus, Cherokee actor DeLanna Studi performs her one-woman show, Indigenous curator Monica Buckle hosts an exploration of artifacts, and Chicago’s Mitchell Museum opens a thought-provoking traveling exhibit that spotlights the epidemic of stolen indigenous women, girls, and 2Spirits.

The University of Michigan has a complicated history with Native American communities, which were vital to its very existence. Join in for a discussion with Bethany Hughes, assistant professor of American Culture, on the historic and ongoing activism of Native American students. The talk will examine the founding of the Native American Student Association, the work to compel the University to recognize the promise of education made to Native Americans in the 1817 Treaty of Fort Meigs (including a critical lawsuit brought by a U-M football player), and the decades-long work to bring to light the racial stereotyping and misuse of Native American symbols by the Michigamua student organization. Attend in-person or virtually.

This colorful celebration of Native American, Southwestern and Western arts features 150 top-quality juried artists & craftsmen alongside tribal dances, award-winning entertainers, culinary booths and special interactive attractions. It’s an experience for all who attend & participate! In 2023 this festival will be back in Denver, in its old stomping grounds, with dates coinciding with the National Western Stock and Rodeo Show.

Learn more about and enjoy Coast Salish foods with chef and artist Lisa Jackson. Lisa is a tribal member of the Suquamish Tribe, whose ancestral home is located across the Kitsap Peninsula and Bainbridge Island. Born and raised on the Suquamish reservation, Lisa’s inspiration comes from her Native American roots and upbringing. Lisa will be serving up some modern and traditional Coast Salish delicacies. Suggested cash donation of $3 per individual and $10 per family.

Cherokee actor and activist DeLanna Studi embarked on a six-week, 900-mile journey with her father along the Trail of Tears to retrace the path her great-great-grandparents took during the forced relocation of 17,000 Cherokee from their homelands in the 1830s.

Studi collected stories from native Cherokee culture bearers along the way, drawing on these stories as well as historical research to understand her identity and the conflicts of her Cherokee nation—and to write her memoir AND SO WE WALKED.

The critically-acclaimed solo play is “woven together wonderfully. It moves seamlessly… between real life and the world of myths, legends and dreams.” (Broadway World) Studi has originated more than 18 world premieres, including 14 Native productions, and her 25 years of performance experience includes roles on Broadway, Off-Broadway, and at regional theaters.

Filmmaker Jon Scott Bennett will present his extraordinary documentary, “The Pound Ridge Massacre, A Dark Chapter in Early America.” In 1644, a combined force of Dutch and English colonists attacked a Native American village in present-day Westchester County, New York. It was one of the deadliest attacks on the indigenous people on the Atlantic Coast. This is the story of that event, the colony of New Netherland (later New York), and the “River Tribes” of the Hudson River Valley. A discussion and Q&A will follow the screening.

Explore the significance of artifacts and historical objects to better appreciate contemporary Native American and Indigenous art. The past and the present are interconnected through conservation and cultural continuity. Traditions are honored yet modernized to adapt to this ever-changing world. Sharing the heritage and intrinsic beauty of this art serves to protect the creative legacy for the Peoples of Turtle Island.

Monica Buckle is a consultant, curator and scholar specializing in Native American arts and culture both traditional and contemporary. She is a citizen of the Cherokee Nation of Oklahoma.

Opening in January 2023, the exhibition features 35 original works from 12 collaborating Indigenous artists whose work draws attention to the crimes perpetrated against Native women and 2spirit individuals in the United States.