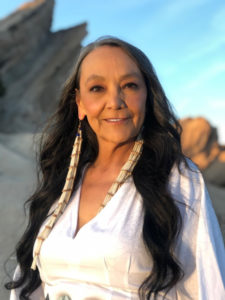 NEW YORK — Becoming an iconic Indigenous film star isn’t easy. With a career spanning 50 years and more than 120 acting jobs in movies, television and theatre, Tantoo Cardinal has been working hard since 1970, and she isn’t slowing down.

The Canadian-born actor is currently starring on Stumptown, the ABC television show that airs Wednesday nights. In the hit series, she portrays Sue Lynn Blackbird, a female Tribal Leader who runs a Tribal government and its casino gaming operation.

Beyond that, these days, the Métis actress continues to be an activist while sharing her own life story. With a resume that includes Dances With Wolves, Dr. Quinn Medicine Woman, The Grizzlies, Legends of the Fall and Smoke Signals, to name a few, she has a lot to say.

This weekend in New York City, Cardinal, 69, speaks at Park Avenue Armory’s “Culture in a Changing America” event during its “Womanifesto” panel on Saturday. She will speak of her many roles and position as one of the leading actresses, alongside an impressive roster of other acclaimed actresses. Through a series of readings by the panelists, the event also honors the Women’s Rights Movement and the 19th Amendment.

As an Indigenous woman, Tantoo has had to deal with her own challenges for equitable treatment throughout her career. But, the Alberta native said, it’s getting a little better each day.

“Now, we have our own filmmakers who are stepping forward and telling their own stories—our story,” Cardinal told Native News Online. “When I first started, we didn’t have that, not anyone I knew about.”

Looking back, Cardinal said it was watching how her people were being wronged that convinced her to take the leap into acting.

“It was my sense of injustice and my rage of how we were being treated,” she said. “I wanted to be a part of bringing something truer forward. To bring some justice to who we are as human beings and our right to life. And very few backed us up, though we have had allies all along the way. But it’s important we tell our own story. We have to describe and explain our own world, because it’s been so maligned.”

Cardinal also recalled her childhood days in rural Anzac, Alberta—a time when she wholly connected her with her Native roots.

“I think running with the wind in my hair was one of things,” she recalled. “And, what God gave me, a sense of myself. Being who I am. A sense of freedom, sort of a wildness. By myself, that’s when I felt best. That’s how I found my connection and relationship with, for lack of a better term, our ancestors.”

While she was a long way from Hollywood stardom back in her youth, Cardinal said the people who surrounded her, including her grandmother who helped raise her, made for an unforgettable life.

“Those times I had in my head, when I was a kid, is really what sustained me,” Cardinal said. “Plus, the kindness of people in the community. Also, the coming together of the grandmothers when we went berry picking and things like that.”

Today, many children are increasingly tied to electronic devices, but Cardinal said she was lucky enough to connect with the Earth.

“The aloneness was so vibrant and alive with what surrounded me in terms of nature, the wind and the birds were very alive, very rich and very comforting,” she recalled. “Those are things I took with me, and so much love for the people who raised me.”

Of course, it wasn’t all positive experiences back in her youth. Cardinal lost family members to violence and witnessed the mistreatment of Indigenous people.

“I had a sense of the huge injustice being done to so many people,” she said. “So many good, kind unassuming people. It all affected me. Also, it makes it difficult walking around in an atmosphere where we’re considered less than dirt—because dirt isn’t considered very sacred either.”

While speaking on the lack of concern about the Earth’s resources, Cardinal said she sees a direct correlation between the abuse of women and our planet. She said lasting tragedies, like the Missing and Murdered Indigenous Women epidemic, are deep-seated cultural problems.

“I recognized many years ago, that we as women, and particularly Indigenous women, are treated the same way Mother Earth is treated,” she said. “It’s completely abusive, not at all respected and used for whatever nourishments we have to offer. It must come from a place of fear. The history of the abuse of women is a very, very long history. But these are the times where that balance is coming back.

“We’re in the midst of a change,” she added. “We really have to get back to our origin roots and get to remembering that it’s women who carry that responsibility of the gift of creation.”

Taking a step back even further, Cardinal said those in positions of great power are not helping matters, but she remains optimistic.

“What is this for? Destroying life? It is the same constant war that has been with us for eons and decades,” she explained. “Some are adamant that destruction is the way. These are men of absolute greed and destruction and they really don’t give a flying shit about anybody but their cronies. How they manipulate is just stunning—but they’ve been so maligned they can’t even tell.”

When asked about her preference for acting roles, Cardinal even looks at the bigger picture before signing on to a new job. In short, she prefers quality over quantity—like parts in 2019’s Falls Around Me.

“I prefer good stories,” she said. “Strong characters and forward movement in what we’re doing, in terms of breaking down and shaking loose this big barrier that’s there in front of Indigenous people—in all of our disciplines and all of our careers.

“The battles we are heading for are to do with all people,” she added, “but the responsibility we have as Indigenous people is to fortify our fort, hold our structure strong, clean our roots and cleanse Earth from colonialism and genocide and all those damages we’ve had to live with for all this time.

“I think we’re in a good position to see ourselves clearly, gather our strengths and to know our tools and walk forward with them—and help the Earth breathe.”