Erica Tremblay is a citizen of the Seneca Cayuga Nation of Oklahoma. She’s a filmmaker, a writer, and a language learner, living in upstate New York on her ancestral land on Cayuga Lake. Tremblay is a writer on season two of Reservation Dogs, and she recently sold a show with Sterlin Harjo to Paramount Plus called Yellow Bird. She was also a writer on Dark Winds, a series with Zahn McLarnon that will be premiering on AMC later this year. 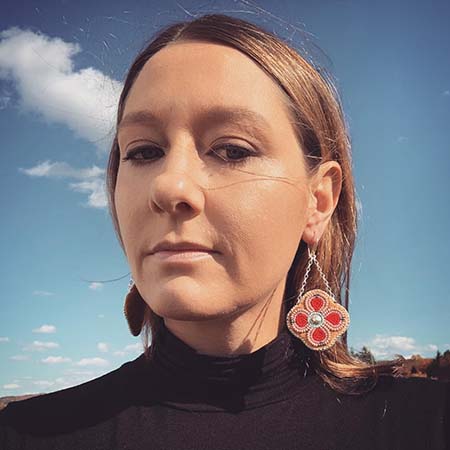 Native News Online sat down with Erica to discuss her work, including an upcoming documentary about Jaci McCormack.

Native News Online: Can you talk a little bit about the Nez Perce basketball film that you’re working on?

Erica Tremblay: Rise Above, based on Jaci McCormack's real-life story of overcoming and rising above [the] odds. They reached out to me last year, and told me what they were hoping to do with the film to reach Native kids where they're at. I just fell in love with Jaci and her story, and what she's doing with her organization Rise Above. I'm thrilled to be a part of Jaci's telling her story.

Right now we've just written a script. In the coming months, there will be lots of activity around casting and location scouting, and then filming when everything falls into place. We've spent a lot of time speaking with Jaci McCormack, and reading and listening to the interviews she's done over the years. I had a chance to travel to the Pacific Northwest last year during one of her Rise Above events and got to see firsthand how she works with the youth and how they have a safe and productive place to go with these basketball clinics that she does. We've spent a lot of time trying to get the story right.

Native News Online: Will you be directing and producing as well?

Erica Tremblay: I am signed on as a producer. Jaci's working with a director called Dennis Lee. He is amazing. I think he really gets the vision of what I put down on the page, and will execute it and translate it to the screen so beautifully.

Native News Online: I feel that when people in Indian Country see film and television actually reflecting their experience, they get really excited, because we're not used to seeing ourselves represented in a modern, contemporary, and positive way.  But I think that for many, it still feels like something they're watching from the outside, and that the world of entertainment is still unattainable.

Erica Tremblay: We've been using the word ‘representation’ for a long time now. But sometimes the problem is that these characters are being created by non-Native people. Many of our ancestors have always been great storytellers. We are still great storytellers. And we're finally seeing Natives writing and making the shows and films, so we're now seeing Native characters on the screen in the image of the people writing those characters.

I'm able to pull from the people I know, my family members, my faith keepers, my teachers, my elders, and put those personalities on the screen in a really authentic way, at least authentic to my experience.

For many years in Hollywood, you would get calls around to be a consultant, and you'd get paid a small sum of money to come in and sign off on what a non-Native person had written. We're hoping that those days are soon to be over. We don't want to consult, we want to actually make content for and about our communities.

Native News Online: How do folks start telling these stories? How do you become a director or a screenwriter?

Erica Tremblay: I always wanted to be a filmmaker. I've always wanted to be a writer. I've spent years and years doing my own projects, even if it was just with a cell phone or a low-budget digital camera, documentaries or short films or whatnot. My biggest suggestion is just to find other people who want to tell stories, and then support each other in that, like, ‘Okay, this weekend, we're going to do your film, and then next weekend, we're going to do mine, and we're gonna learn from each other, we're gonna learn how to do these things.’ Community and collaboration and using what you've got is a great place to start.

Native News Online: You've got several projects beyond Rise Above going on this year. Can you talk about them?

Erica Tremblay: Dark Winds is an AMC television series based on Tony Hillerman novels set in Diné country. I am currently developing the pilot for a series adaptation of a Pulitzer Prize finalist book called Yellow Bird, with Sterlin Harjo. It's another situation like Jaci's, where we're taking a real-life story and adapting it for the screen. It's really expanded my knowledge of how Hollywood works.

I finished up my episode for Reservation Dogs season two. To be in an all-Native writers room with some people that I look up to so much is really a dream come true, getting to collaborate in a setting where we all are coming from different Indigenous backgrounds, and finding a way to infuse season two with heartfelt journeys and the characters. Then I have a feature film that we're currently developing. I've developed it through the Sundance writers screen and the Sundance screenwriters and directors lab.

Native News Online: My sense is that there's generally an idea in Hollywood that all Native Americans are the same.

Erica Tremblay: I think it's still very pervasive. I can't speak to every Indigenous experience, nor can anyone else, and I think there's still a long way to go for Hollywood to understand that. I'll still get pinged for jobs to consult on a project that's from the Pacific Northwest, or someplace that I have no knowledge about. I can't be the person that signs off on something just because I'm an Indigenous person.

One of the things that was so great about Rise Above was having direct access to Jaci. Anytime there was a question that came up for me about what it was like to be living on the Nez Perce reservation, I was able to call her up and get real answers. We would read the scripts, and she'd be like, ‘that's not exactly the way we would do it.’ And I was like, ‘Okay, well, how would you do it? Let's get it right.’ We really carry a lot of responsibility.

I’ve certainly taken jobs that I probably shouldn't have and written things that I cringe at now. But I think it's our responsibility to constantly be evolving and thinking about our responsibilities, not only to the story that we want to tell, but to the community that we are representing.

Native News Online: What would you want people in Indian Country to know or understand about your work?

Erica Tremblay: I'm centered on creating stories that will resonate with my community. The more that people are paying attention to stories created by Indigenous folks, the more we'll see a larger understanding of what it means to be a modern Indigenous person, that we’re working and loving and laughing and fighting with our boyfriends, and doing all the things that everyone else does,

The more diversity there is in Indigenous storytelling, the better.

The more that we push for those ethical things that we all deserve to have, no matter who we are, the more we will see really beautiful, stellar work coming from our communities.