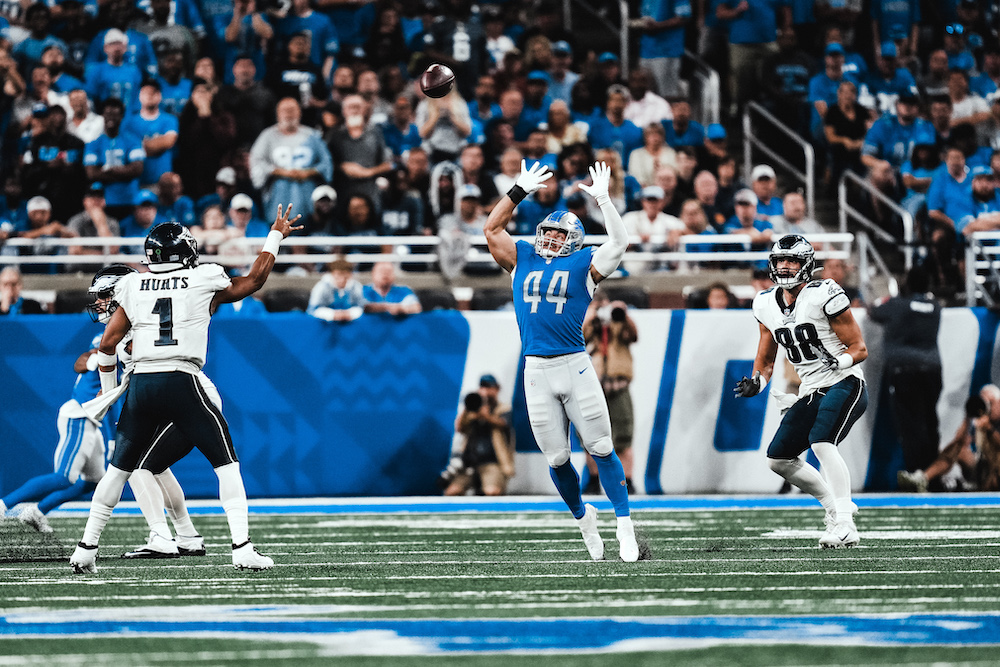 The waiting game is over for rookie Malcolm Rodriguez (Cherokee).

Last spring, the former Oklahoma State University standout had to wait until the third day of the NFL draft to hear his name called by the Detroit Lions, who selected him with the 188th overall pick.

When the season kicked off last weekend, though, Rodriguez didn’t have to wait very long to hear his name called as a starting linebacker in an NFL stadium.

After an impressive summer camp and preseason, Rodriguez, 23, a sixth-round draft pick, earned his first NFL start in the Lion’s season opener against the Philadelphia Eagles on Sunday. He’s the lowest Lions’ draft choice to earn a season-opener start in his rookie year since 1987.

While his on-field debut may have surprised some, it wasn’t a shocker for Lions coaches or for Rodriguez, who had been working with the defensive unit’s first team since August. He will likely play a crucial role this season in the Lions’ defense, which was well below average last season, ranking 31st in points allowed, 32nd in passing yards, and 30th in sacks.

Rodriguez entered the NFL after an impressive collegiate career at OSU, where he racked up more than 400 tackles. He was a first-team All-American his senior season and was named the MVP of the 2022 Fiesta Bowl.

It was a surprise to many that Rodriguez wasn’t taken earlier in the draft. His former college coach believes other NFL teams missed an opportunity by letting Rodriguez drop so far in the draft.

“Malcolm’s going to do his job,” OSU Head Coach Mike Gundy said. “He’s humble. He’s going to do his job, and it is what it is. I mean, the guy is probably going to play the game for a long time if the good Lord’s willing to keep him healthy. The interesting thing is, there are a lot of teams that missed out on him, right? It wasn’t just one. Thirty-one teams missed on him.”

There was no missing him in Sunday’s season opener against the Philadelphia Eagles. Rodriguez had six tackles, including one for a loss, and was a bright spot in a defense that struggled to contain the Eagles for much of the game. Early in the game, Rodriguez hit an Eagles player so hard that it broke the visor on his helmet. At one point, he displayed his wrestling background by hip-tossing 300-pound, five-time Pro Bowler and four-time First-Team All-Pro center Jason Kelce effortlessly.

Rodriguez was the Lions’ highest-graded defensive player for Week 1 per Pro Football Focus, and his debut game was graded as one of the league’s best rookie debuts in years. As an early testament to his performance and future, on Monday, his jersey was sold out on the Lions’ website.

Rodriguez is the youngest Native American member in the NFL among a small collective of Indigenous players. 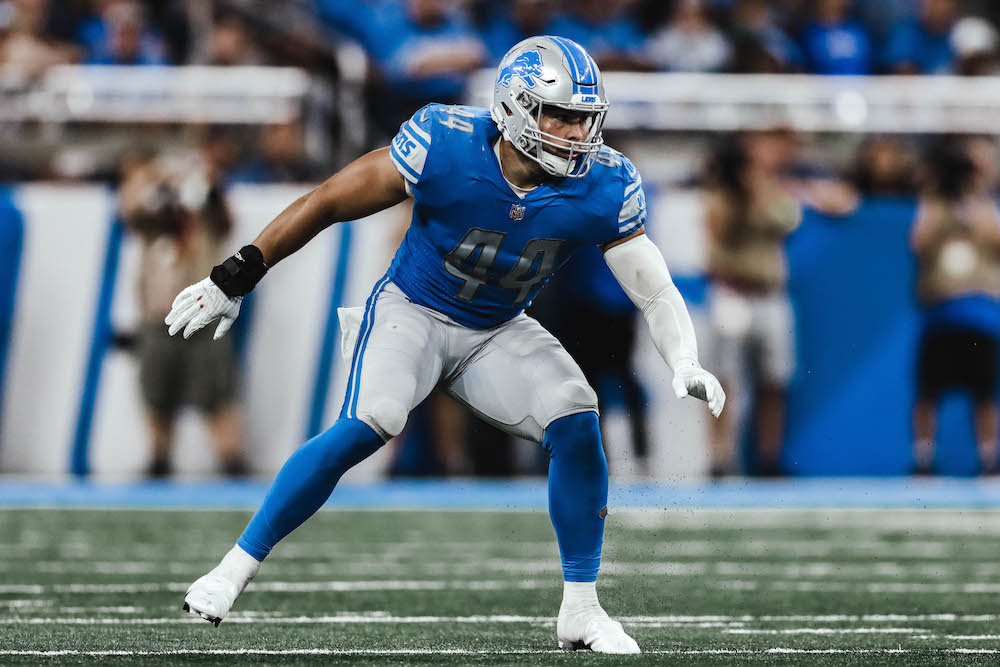 Rodriguez is a citizen of the Cherokee Nation, hailing from the small town of Wagoner, Okla. Growing up, he was a talented multi-sport athlete, playing baseball and football and competing in wrestling. He claimed state wrestling titles in his sophomore, junior and senior years at Wagoner High School.

His Native ancestry is an important part of his life. He says his family celebrates their heritage through food — Indian tacos on his mom’s side and Mexican food on his dad’s side.

“Yeah, it’s very important, especially through my mom’s side, and my dad’s got a little in him too, but just kind of brings us back to our roots,” Rodriguez told Native News Online.

There are many Native youths now looking up to Rodriguez since he’s made the NFL.

Being one of the few Native players in the league is something special.

“It’s a blessing,” Rodriguez said. “It’s just very diverse in this league, so it just shows that everybody’s got talent in any ethnicity or culture or any of that, so it’s a blessing.”

His mother and family reflect these sentiments.

“I am very proud and honored to be of Cherokee ancestry and have always instilled that sense of pride into my boys,” his mother, Shanna Rodriguez, said. “Growing up, we made sure they were educated on the origins of their tribal bloodline and the hardships their ancestors were forced to overcome. It really makes present-day adversities pale in comparison and has created an underdog mentality to persistently rise above. My husband being of Hispanic descent and my tribal descent led to us referring to our boys as our ‘Indicans.’ We are extremely proud and embrace both heritages.”

Cherokee Nation Principal Chief Chuck Hoskin Jr. is also proud of Rodriguez and what he represents.

“Watching Cherokee athletes, like Malcolm Rodriguez, is inspiring for so many of our Cherokee citizens across the globe,” said Principal Chief Chuck Hoskin Jr. “... As we saw on the HBO show Hard Knocks, he embodies our ancestors’ spirit to persevere, and his competitiveness and commitment to succeed as a linebacker in the NFL shines... It shows our youth that if they are willing to work hard, live with the right values and good, moral character, they too can accomplish great things and fulfill a lifelong dream.”

Rodriguez had an impressive camp with the Lions and was prominently featured in the popular HBO football series “Hard Knocks,” which followed the Detroit Lions’ lead-up to the 2022 football season.

He has become a favorite on the team, quickly earning the nickname “Rodrigo.”

Postgame, Rodriguez spoke about playing against mobile quarterbacks and developing from game one.

“We knew coming in he liked to roll out to his right,” Rodriguez said. “So we were just trying to get our game plan trying to stop him from rolling out to that right. But, you know, a guy like that, he’s still able to roll out, so it’s just one of those things that we got to get back on the chalkboard and just chalk it up.”

Rodriguez took it as a learning experience and is looking forward to the next game.

“Definitely got to build on it, you know,” Rodriguez said. “We’re going to watch the film. Watch the film tomorrow. One of those things we got to practice. So at the end of the day, it’s just doing your job.”

“All in all, I thought he did a nice job,” Campbell said. “You know, there’s a couple of plays I know he wishes he could have back. But for a rookie who went in there and played a substantial role for us, I thought he did a nice job. You know, he was physical, he was aggressive, zero MAs [missed assignments], he was on top of it now. So that was good to see. And so now it’s just, man, we need more out of special teams from him, you know, which we’ll get. But, first time out of the gate, defensively (he) did some really good things.”

The Lions host the Washington Commanders at Ford Field on Sunday, Sept. 18. You can catch the game at 1:00 PM EDT on FOX.