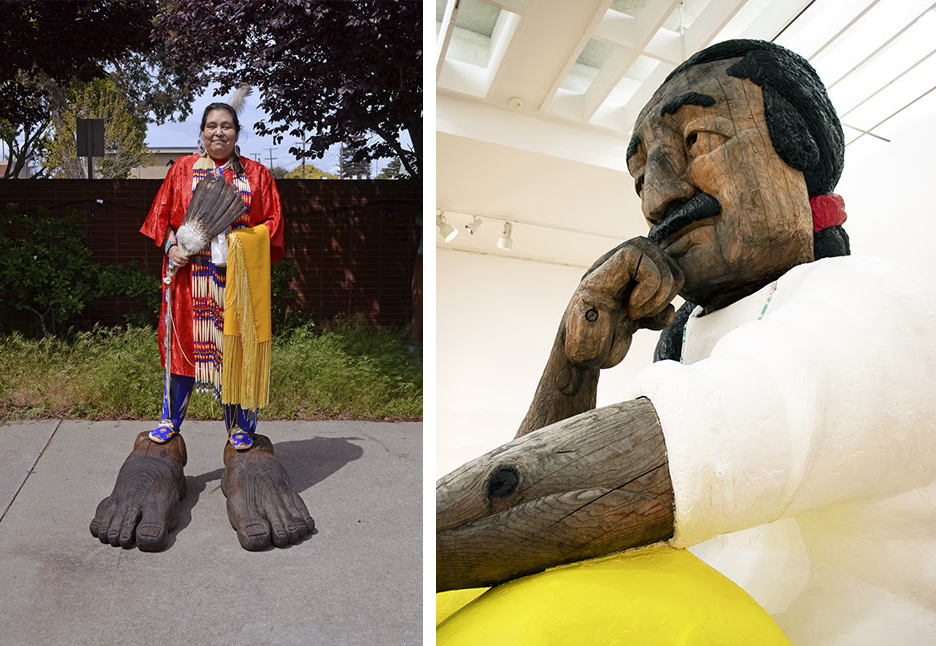 Peltier has been incarcerated for the past 45 years for the murder of two FBI agents, who were shot and killed at Oglala on the Pine Ridge Indian Reservation in 1975. To many American Indians and others, Peltier, who turned 77-years-old on Sept. 12, is a symbol of an oppressive federal system that confines Native people to a dismal place in American society.

Rigo 23 is a well-known artist in the San Francisco Bay Area. He has exhibited his work internationally for over three decades, often placing murals, paintings, sculptures, and tile work in public venues.

The Time and Again exhibition’s main feature is a sculpture made from California redwood, foam, plywood, and metal that is based on a small hand-painted self-portrait Leonard Peltier created in prison. The statue’s 9’x6’ base replicates the dimensions of a traditional prison cell. Each time the work is shown, the exhibition incorporates selections from the growing collection of photographs of supporters standing in solidarity on the statue’s feet. 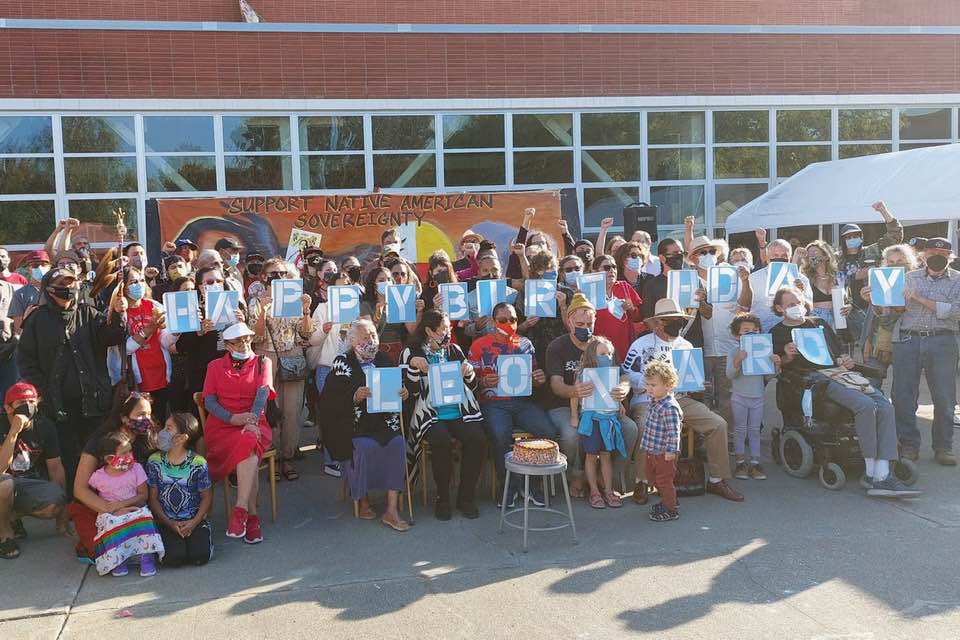 Community celebrates Leonard Peltier’s 77th birthday on Sunday, Sept. 12 at Richmond Art Center. (Photo/Facebook)The sculpture became controversial when it was completed in 2016 and first shown at the Katzen Art Center at the American University, Washington D.C. Facing pressure from the FBI Agents Association and a bomb threat made to the university on the same day, the artwork was abruptly removed from display. It took one year to return the sculpture back to Rigo 23.

Since its return to the artist, it has been exhibited at the Main Museum in Los Angeles (2018), SOMArts (2019) and most recently atop the roof of the San Francisco Institute of Art overlooking Alcatraz Island (2020).

The statue’s feet, which are detachable, have taken their own journey, traveling to significant sites of Native Resistance across the U.S. including Standing Rock, Alcatraz Island, Wounded Knee, Crow Dog’s Paradise, and the Pine Ridge Indian Reservation. Supporters have been invited to stand on the feet as an expression of solidarity – and be photographed. In summer 2021, Richmond Art Center also welcomed members of the community to do so.

The current exhibition includes materials such as original sketches for the banner “It’s 1999, Why is Leonard Peltier Still in Prison?” mounted outside the Berkeley Art Museum; photographs from the Tate Wikikuwa Museum installed at the deYoung Museum that same year; brochure and zine from theTate Wikikuwa Museum at the Warehouse Gallery in Syracuse University where the Leonard Peltier sculpture premiered, in 2011; and historical photographs by the late Michelle Vignes documenting seminal events in the history of the American Indian Movement.

Arthur Jacobs contributed to this article from Emeryville, Calif.