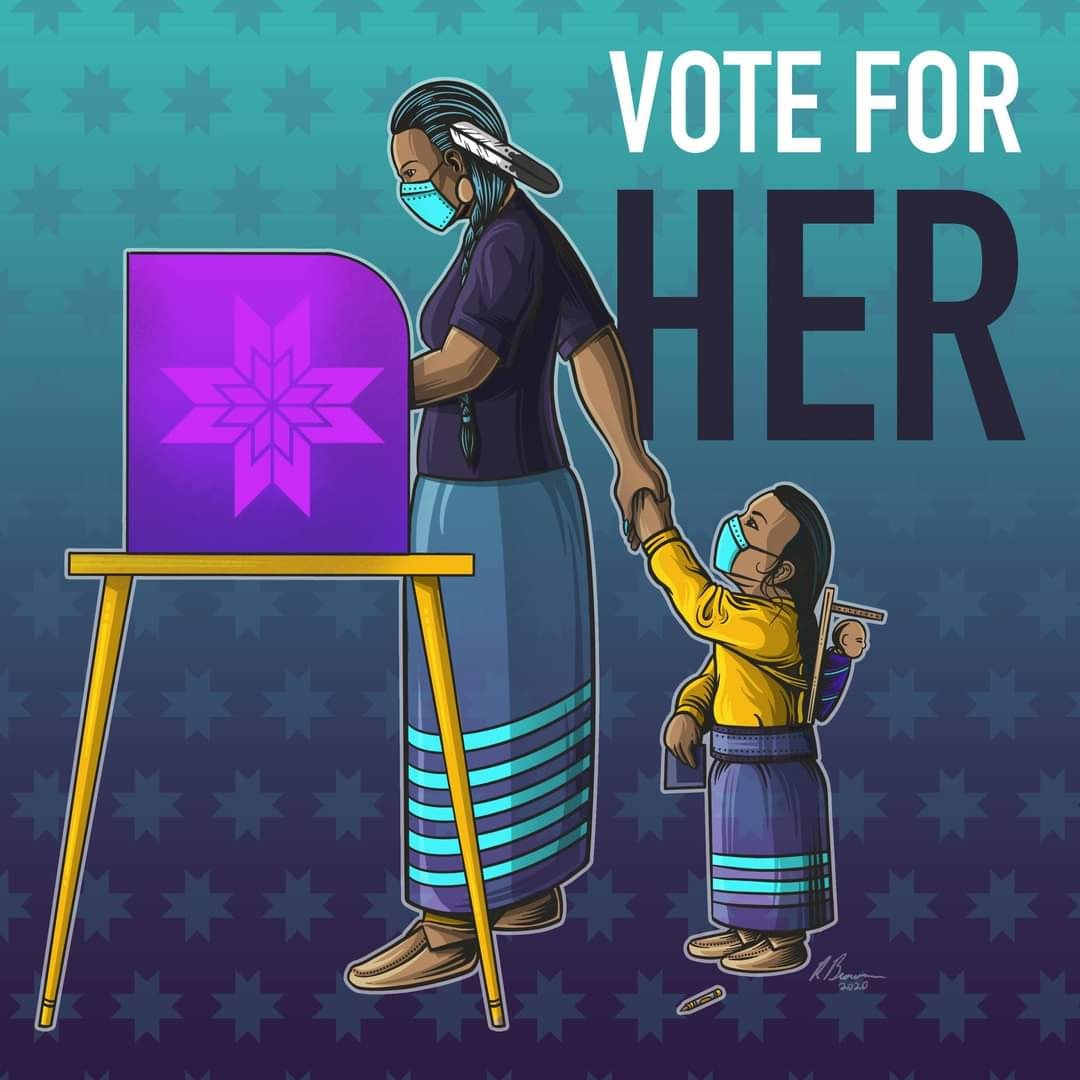 On a digital billboard in Tulsa, Okla., three Native ladies rock multi-colored mocs on their way to the ballot box.

“I really want the Native vote up there,” said Cocopah artist Tiffany Jackson, who created the image. “I like to grab the audience’s attention through bright colors.”

When Jackson created the image, she had no clue her trio of ribbon-skirted voters would hover above a major city. She originally made it to enter in a pro-voting art contest held by the Urban Indian Family Coalition (UIFC), themed “Democracy is Indigenous.” Jackson didn’t win the competition. That honor went to Hopi artist Alyssa Adrinne Masaquaptewa.

As it turned out, winning wasn't everything. The image’s striking hues still managed to make a big impression on an important figure in the world of Native voting awareness.  David Wilson, director of Rock the Native Vote in Tulsa, and Conference Superintendent of the Oklahoma Indian Missionary Conference of the United Methodist Church, which partners with UIFC, saw the image during the art contest and reached out to Jackson to ask if she’d be up for having it displayed on a billboard.

“He wanted to use my image because he liked the vibrance of it,” said Jackson, a multimedia artist at Desert Diamond West Valley Casino in Glendale, Ariz.

Jackson’s work is just one example of powerful pro-voting images by Indigenous artists that are making the rounds on social media and drawing attention to the urgency of Native participation in the upcoming election on Nov. 3. More meaningful than your average political meme, the visual messages are carefully crafted with Native values and designs in mind. 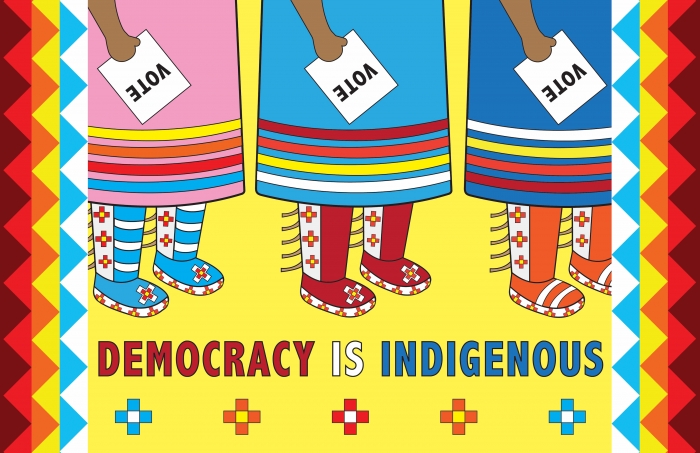 This vibrant piece of pro-voting art is featured on a digital billboard in Oklahoma and was created by Tiffany Jackson (Cocopah, Quechan, Paiute, Rosebud Sioux, Laguna Pueblo). (Tiffany Jackson)

Statement: “I thought the saying ‘Democracy is Indigenous’ is really true. When the settlers came, we were already established. We already had our own economic system and we already had everything in line and they just piggybacked off of us. I came up with the idea of the ladies, because 2020 marks the 100 year anniversary of the women's vote, and I wanted to emphasize that. And I also read that 1962 is when all Natives got recognized to vote. It was only 58 eight years ago... I used to be a fancy shawl dancer, and the triangle designs on the sides of the image are from one of my shawls. I wanted to put a little bit of me in the graphic. I wanted the ladies to have the moccasins because that grounds us to mother earth, and I have the ribbon skirts on them because they symbolize resilience, sacredness, and survival. And that's how we are. We’re trying to survive through this time.” 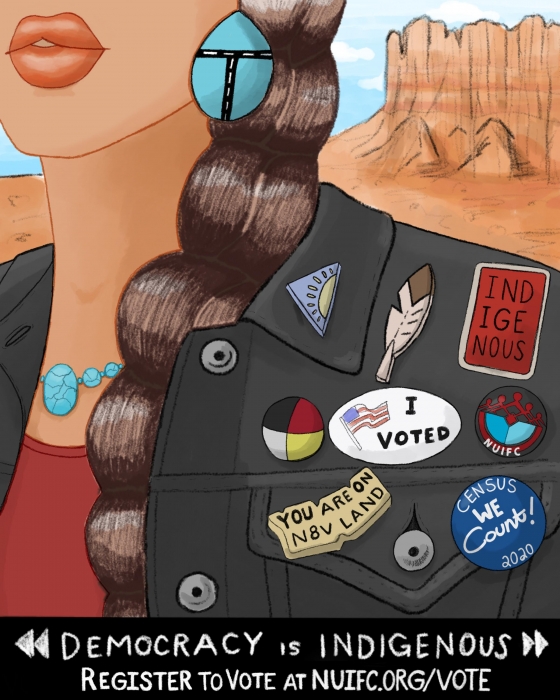 Statement: “The background is based off of where I'm from. I'm Hopi, so we're really close to the Navajo Nation and we have all of the really nice sand rock formations and mesas. The girl in the graphic only has part of her face, so it's not very specific who it is. It's not me. It's not the lady next door, but it could be your cousin, your Auntie, your little sister. I just wanted her to be Basic Rez Girl. I love clothes, and when I was younger, I used to put a bunch of pins and patches on my denim jacket and I still do sometimes. My original graphic had all the pins except for the NUIFC and census ones. When I won they asked if I could add those too. And the gold pin that says ‘You are on N8V Land’ is actually a real pin by the brand Urban Native Era. I couldn't get the word ‘Native’ to fit in there, so I just put N8V. I also wanted the graphic design to be a little bit Hopi, so certain things match my tribe specifically, like the turquoise earrings with the lines that look like a road. I'm only 20, so I didn't have the right to vote in the last election. Now, I feel like I'm voting on behalf of people who can't vote, like the incarcerated or people too young to vote. I remember watching everything unfold on election night and I was a little devastated. I felt so helpless because my voice wasn't heard. This time around, I at least have a voice. Indigenous people in America haven't had the right to vote in every state since 1962. It’s so new. We've had this democracy around for a while now and it’s been basically based off of white male views. Now is the time that we get BIPOC people to vote because now our vote matters and our voices matter.”

Made in collaboration with Illuminative, a nonprofit designed to increase the visibility of Native nations and peoples in America.

Statement: “I was really hoping to show the potential of three generations in one image. The idea of having a mother vote, but also being connected to her daughter, who would someday also be a mother. Everybody takes away something different from the image. For some people, it's about empowering themselves through the act of voting. For others, it is about empowering their children or their grandchildren. I had several conversations with my peers and one of them was talking about going to vote with her grandmother when she was younger, and she didn’t understand why it was always such an important deal for her grandmother to go vote. Her grandmother would get dressed up for it, and take her along. And the granddaughter didn’t know till much later that her grandmother wasn't always able to vote... It’s good that the image is getting out there. I hope people find inspiration from it.” 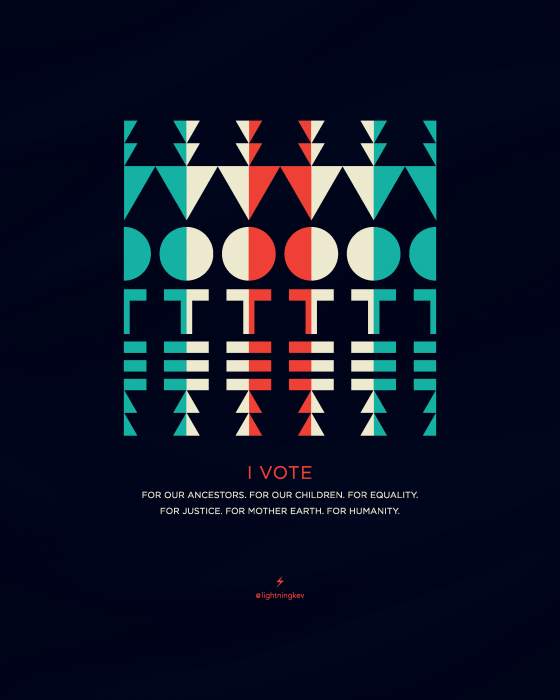 Statement: “The design itself represents balance, beauty and simplicity in very chaotic times. The arrows, circles and T shape are found in many Native cultures. They're not anything really specific. I tried many different color combinations. I thought I should do something American-ish, but not the standard primary red, white, and blue that you see all over. I wanted to play off those colors, and I chose earthy colors that other Natives might relate to, like the turquoise, the coral, and natural white. At first glance, you don't really see the word 'vote' in there until you pause and read it a little closer. 'I vote' is about me voting, but it's also 'I,' meaning Indigenous. It's a two-part message. I thought about the teachings that I've grown up with that are the real base of many Native cultures: to care for each other, not only our own people, but for all humanity, and what we stand for: the environment, earth, our children, equality. I wanted to create something personally for me as a designer, that I could also put out to encourage other Natives to register and to vote, because that's really the only power we have to make change. Natives were only granted the right to vote in every state in 1962, and we're Indigenous to this land. If my image gets one person to act, I'll feel good about it. And that's already happened for me.”