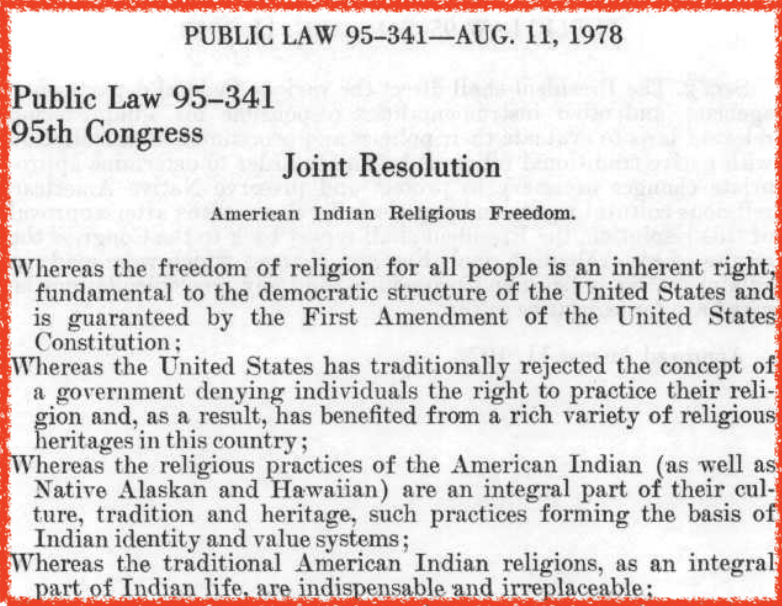 On this day in history 44 years ago, the American Indian Religious Freedom Act (AIRFA), enacted by joint resolution of Congress, was signed into law by President Jimmy Carter.

“In the past, Government agencies and departments have on occasion denied Native Americans access to particular sites and interfered with religious practices and customs where such use conflicted with Federal regulations. In many instances, the Federal officials responsible for the enforcement of these regulations were unaware of the nature of traditional native religious practices and, consequently, of the degree to which their agencies interfered with such practices,” President Jimmy Carter said in a statement about the Act. “This legislation seeks to remedy this situation.”

Before AIRFA became law, many aspects of Indigenous culture were outlawed. Tribes were not able to practice sacred ceremonies, or pass teachings down to their younger generations.

One of the issues AIRFA sought to rectify was the struggle to procure and use ceremonial feathers, specifically eagle feathers. Bald eagles were deemed an endangered species, which severely limited the access Natives had to them.

In 1979, an announcement by the Native American Rights Fund explained the importance of feathers.

“It is difficult for non-Indians to understand and accept the fact that Indians do attach religious importance to the use of feathers in certain rites; indeed, they are essential if the rite is to have any religious meaning for the Indian,” the NARF statement said.

Eight years later, President Bill Clinton signed an executive order which mandated that in managing federal lands, federal agencies must accommodate access to and use of sacred sites and must avoid adversely affecting such sites.

The law was then amended in 1994 to provide that “the use, possession, or transportation of peyote by an Indian for bona fide traditional ceremonial purposes in connection with the practice of a traditional Indian religion is lawful, and shall not be prohibited by the United States or by any State.”

To this day, the American Indian Religious Freedom Act is still in effect. This Act has allowed Tribes across the nation to practice sacred ceremonies and pass traditional teachings and traditions on for generations to come.