After 12 hours of testifying before the Senate Judiciary Committee on Tuesday night, Judge Ketanji Brown Jackson, the first Black woman nominated to the U.S. Supreme Court, was questioned by Sen. Alex Padilla (D-CA) on voting rights and tribal sovereignty. 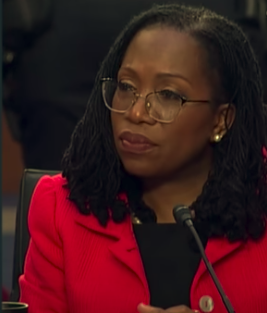 When confirmed, Judge Jackson will potentially be taking the place of the retiring Justice Stephen Breyer who she worked for early in her career.

Sen. Padilla questioned Jackson on what she believes the role the judicial branch plays in upholding the fundamental right to vote. He explains how when he was California’s Chief Election Officer, it was his job to ensure safe, secure, and high participation in elections.

“Can you just share for a couple of minutes what you believe the role or responsibilities [of the] Supreme Court might be in protecting this fundamental right to vote and by extension, our democracy?” Padilla asked Jackson.

Judge Jackson asserts that the right to vote is protected by the Constitution saying:

“The Constitution makes clear that no one is to be discriminated against in terms of their exercise of voting. And the Congress has used its constitutional authority to enact many statutes that are aimed at voting protection. There are also laws that relate to ensuring that there is not only voting access, but ensuring that that isn't fraud in terms of voting.”

She continues, “These concerns are embodied by various laws and provisions, and there are disputes at times over the concerns in the balances that are being made across the country relating to the exercise of voting, and those disputes come to court and then eventually to the Supreme Court that interprets the laws that pertain to the to the fundamental right to vote, which, as you say the Supreme Court has acknowledged is a fundamental right.”

After being questioned on voting rights, Senator Padilla moves on to the question of the importance of upholding tribal sovereignty. He asks: “As a general matter, can you share what your understanding is of the federal government's legal and moral trust, responsibility, and relationship with tribal governments?”

In Judge Jackson’s response, she reaffirmed the already pre-established sovereignty of tribal governments.

The full 30-minute questioning can be found here.