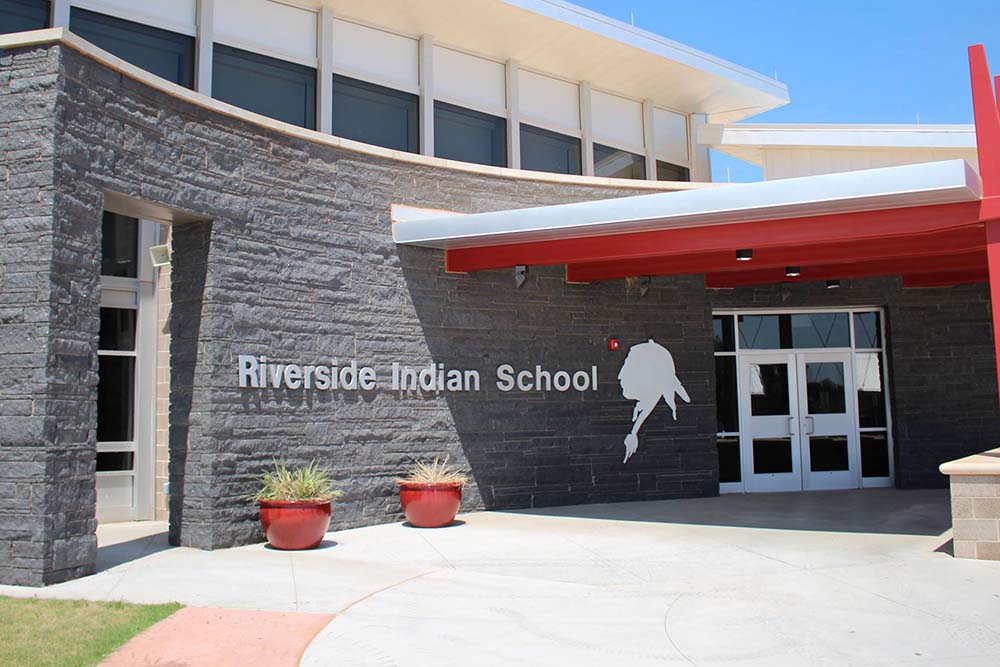 Riverside Indian School, now operated by the Bureau of Indian Education (BIE), is home to some 800 Native students. What once was a place for cultural assimilation and colonization, is now a place for Native students, who represent over 75 different U.S. tribes, to engage in culture and spirituality while receiving an education.

The Riverside Indian School is Deb Haaland’s first stop on the Department of Interior’s “Road to Healing Tour” that was announced on May 11, with the release of the Federal Indian Boarding School Initiative Investigative Report. Haaland and Newland will be conducting listening sessions to hear from the survivors of boarding schools.

Other Road to Healing Tour visits will include sites in Hawai’i, Michigan, Arizona, and South Dakota during 2022. More states will be announced for the tour for 2023.

“We appreciate Secretary Deb Haaland and the U.S. Department of the Interior for taking on this very important project. We also thank the many partners, tribal nations, individuals and families that have participated and shared their story so far. May we continue to build on this initiative so that we can learn and offer healing to those affected,” said Governor of the Chickasaw Nation based in Ada, Oklahoma, Bill Anoatubby in a Facebook Post.

Riverside Indian School first opened in 1871 and is one of the oldest federally operated boarding schools in the United States. Initially, it was organized by Quaker missionaries and opened under the name Wichita-Caddo School. In 1878-1879 the school was renamed the Riverside Indian School.

The school resides on the same land the school was founded on–more than 135 acres, located on Wichita, Caddo and Delaware (WCD) land. The only thing that still remains from the original school is a graveyard that sits atop a hill. Due to lack of proper record keeping, the number of children buried there is still unclear.

There was no mention of Riverside Indian School included in Volume 1 of the Federal Boarding School Initiative Investigative Report.

Today, the school is the oldest and largest off-reservation boarding school. They offer education for grades 4th through 12th. Five different dormitories are located on the campus, two of which opened in 2014 and 2015. Riverside Indian School houses students for nine months out of the year.

There is a large emphasis on athletics, the school’s mascot is the Braves. The school offers a chance for high school students to participate in Basketball, Baseball, Softball, Track and Cross Country.