Pueblos Applaud the Signing of the STOP Act into Law 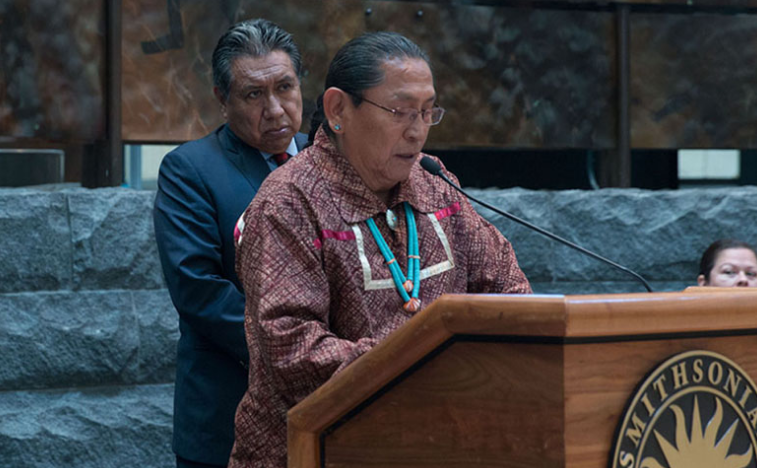 The Pueblos in New Mexico have sought this protection for several years. The All Pueblo Council of Governors (APCG) Resolution No. 2021-08 reaffirmed the Pueblos’ efforts to stop the theft and illegal sale of Pueblo cultural items domestically and abroad, detailing the painful history of these human rights violations.

The work on the STOP Act, led by the Pueblo of Acoma, is part of a larger effort by the Pueblos to protect languages, cultures, and traditions and the preservation of sacred landscapes, including the Greater Chaco Region and the Caja del Rio. We celebrate the recent reintroduction of the Chaco Cultural Heritage Area Protection Act as part of these efforts.

Until the STOP Act was signed into law, there was no law specifically stop the export of Native American patrimony. The STOP Act will explicitly prohibit the export of tribal cultural items obtained illegally and better enable their return if found overseas. This bill had bipartisan support.

“The Pueblo of Acoma has firsthand, lived experiences of illegal removal and trafficking of our sacred tribal cultural heritage items.  We need these items for our very cultural survival, and their loss hurts us individually and as a people.  One example is the Acoma Shield, which was stolen from its Acoma caretaker, taken out of the country, and put on an auction block in Paris, France,” former Governor Kurt Riley, Pueblo of Acoma said in a statement.

“During our initial attempts to repatriate the Acoma Shield, the Pueblo realized after seeking help from multiple federal agencies that federal law and international agreements with France and other countries could not help.  These past seven years, in working with the support of the New Mexico Congressional Delegation, the Pueblo has achieved the passage of a law that for the first time facilitates the international repatriation of items of tribal cultural patrimony,” Riley continued.

Current Governor Randall Vicente, Pueblo of Acoma issued this comment in a statement: “The Acoma people celebrate the culmination of our years-long fight for enactment of the STOP Act.  We are very proud of Senator Heinrich and Congresswoman Leger Fernandez for their role as lead sponsors and of Senator Lujan and Congresswoman Stansbury for their strong co-sponsorship.  Tribal lifeways are threatened by the removal of our sacred items from our communities, and their loss is painful to our very beings.  We believe the STOP Act will help keep sacred items at home where they belong, and that it will bring home those items that have already left.”