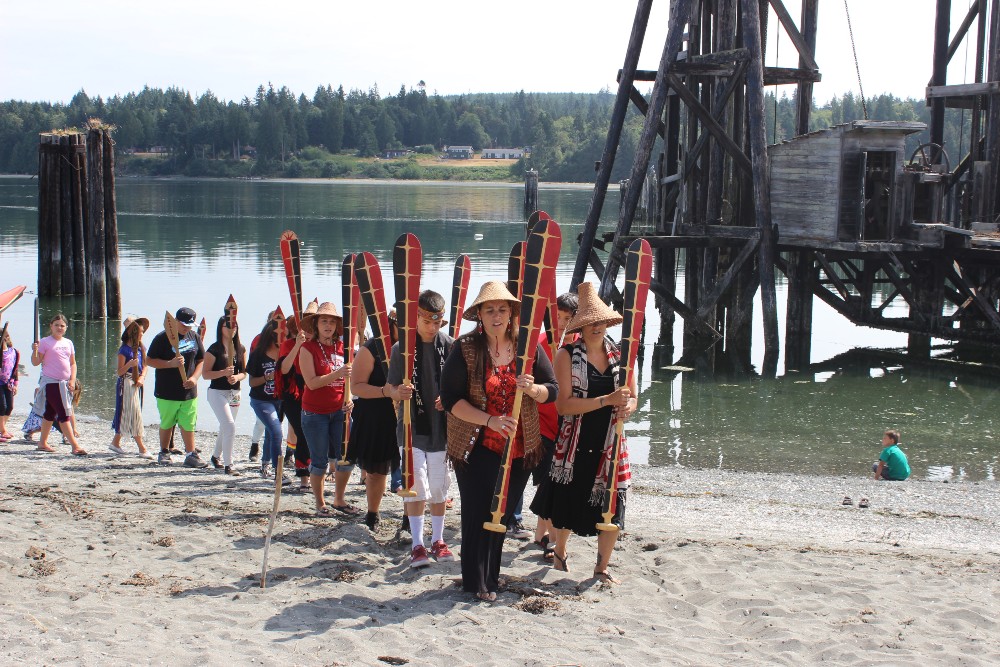 In 1853, the ancestors of the Port Gamble S'Klallam Tribe watched the ship Julius Pringle arrive at their shores in present-day Washington state. The ship carried Captain William Tabot of the namesake Pope & Talbot Company, who continued the process of displacement and land degradation that lasted all the way until relatively recently, when the ancestors of the company's founders began working with the ancestors of those people watching along the shore to return control of some of the land back to the tribe.

The Port Gamble S'Klallam Tribe and the Rayonier timber company — which purchased the company from the family of the original colonizers — recently announced plans to sell 18.4 acres of land, the site of a former lumber mill that displaced the tribe from its home near Puget Sound, as a “conservation easement” where development would be restricted.

The deal, announced in August 2021, was the latest in a series of land and rights purchases designed to return control of more land to the Port Gamble S'Klallam. In 2019, the tribe and Pope Resources — now owned by Rayonier — negotiated an agreement to purchase 937 acres of land adjacent to the north boundary of the tribe's reservation on the east side of the Port Gamble inlet, on the narrow peninsula between Hood Canal and Puget Sound. That would increase the reservation’s size by over 50 percent.

The deals are particularly significant because while many other resource-extraction companies have changed hands, the family that originally dispossessed the tribe of their land were still the majority shareholders of Pope Resources when negotiations began in 2013.

"The ancestors of those individuals were literally the folks that showed up in 1853 on the beach in Port Gamble, where the Port Gamble S'Klallam Tribe was residing," says Adrian Miller, Rayonier’s director of public affairs. "Usually you think about westward expansion, colonialism in sort of the abstract. In this case, I think I would say it's personal."

When the ancestors of the company owners arrived, they relocated the tribe from their village to build a lumber mill in that location, promising jobs, firewood, Christmas presents, and that they would use lumber from the mill to build a new village on the opposite side of the bay.

The mill was the longest continuously operating mill in U.S. history, but business woes forced it to close in 1995. A couple of years later, it burned down entirely. The tribe sensed that the time was right to start talks about buying the land back in 2013, when it sent a letter to Pope Resources CEO David Nunes asking to purchase a tract of land now known as the Hansville Block, further north of the reservation.

"He responded right away and basically said, 'Well, we have a lot of plans that you guys are going to have to be a part of. And we don't want to piecemeal this together, we want a deal.' And that's kind of where it kicked off," says Sullivan.

Things didn't go very well from the get-go. The company wanted to develop the land the tribe's ancestral village was on. The same qualities that made it an attractive village site for Klallam people would make for rows of million-dollar houses and storefronts today. The tribe pointed out that they could raise an objection with the Army Corps of Engineers on the grounds that the development violated their treaty rights, as they had done in the past. That led to some tense discussions at the negotiating table.

"One of their staff got really mad. He's like, 'can you imagine how it feels to have someone come into your kitchen and tell you how to cook?'" says Sullivan. "We were removed from our home. So yeah, I have some knowledge of what that means. That's when I got up and walked out."

Negotiations reached a stalemate. After Pope Resources made some leadership changes that brought fresh faces who Sullivan respected and eventually became friends with, the company gave the tribe 35 acres of mineral rights under the tribal court department to ensure it'd never be developed, in order to bring them back to the negotiating table. The company also hired Miller, who immediately got to work on bringing in a mediator.

"You know, we can behave like neighbors, truly, which is what we are. Because Jeromy will tell you, they're not going anywhere. So it really makes a lot of sense to work with the tribe," says Miller. "Our alternative was probably litigating for at least five years. You're gonna pay the time one way or the other. You can end up with a win-lose situation, or you can end up with a win-win situation. And we landed on the win-win."

Sullivan agrees. "I thought [the mediator] did an amazing job. She made us sit down and try and figure out what the trust issues were. And that was probably the biggest hill to climb." Once that was overcome, they were able to focus on what each party wanted.

The company was looking for ways to sell its landholdings because of pressure from increasing population in the area, about 90 minutes from Seattle by car and ferry. The tribe was looking to buy that land at a price it can afford, and treaty rights give it veto power over any development plans that involve putting structures in the water.

So, in 2019, they made a deal: Pope Resources would sell 937 acres of land to the tribe. In order to bring the price down to a more affordable level, the company would get one last timber harvest, after which it would replant the trees and leave entirely. The harvest is still going on, but the Port Gamble S'Klallam have plans for how to use the land in the future, including putting it into trust status once Rayonier's harvest is complete, maintaining it for timber production, and using it for more housing.

"We have a list of over 200 people that want to move back home. So that will be really beneficial for us in the future for being able to hand out land for our tribal members to be able to grow their families," says Sullivan.

Under the 2021 conservation-easement deal, the tribe plans to restore the site of the former mill and ancestral village and create trails for public use, along with a canoe-launch area.

Sullivan recalls bringing his teenage daughter to the waterfront on a cold November day when he first learned that they'd be completing the deal for the site. "I was like, 'can you imagine looking out there and you'll forever just see trees. And it'll be protected in perpetuity. And she's 16, she's just like, 'yeah, that's great, Dad, I'm freezing. I'm getting back in the car.' Now she's really excited. She loves it."