The following two perspectives provide two glimpses into the Ottawa (Odawa) tradition and culture of commemorating ancestors during annual Ghost Suppers, held annually during the first week of November. They were written in 1943 and 1992, respectively. 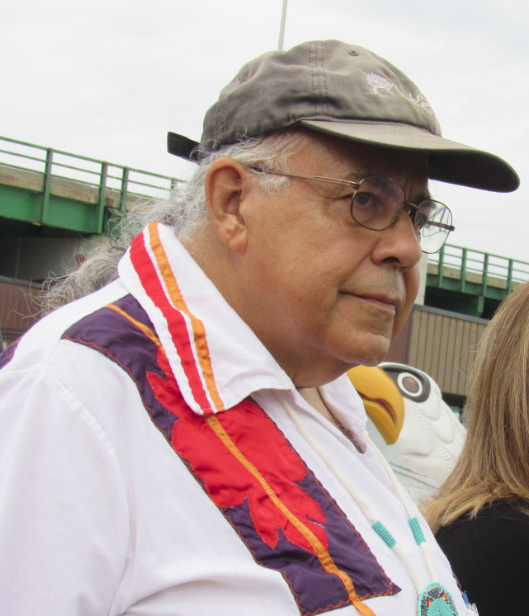 The first glimpse was written by Chief Fred Ettawageshik, who passed away in 1969 at the age of 73. He served as a ogema, leader, to the Odawa during a time before the Little Traverse Bay Bands of the Odawa Indians Tribe, based in Harbor Springs, Michigan, was reaffirmed by the federal government.

The second glimpse was written by his son, Frank, who was instrumental in leading the Tribe during the reaffirmation process. The Little Traverse Bay Bands of the Odawa Indians was reaffirmed by the federal government in September 1994. He served two terms as tribal chairman. Currently, he is the executive director of the United Tribes of Michigan.

Ghost suppers are held each year during the first week of November by the Ottawas in the northern regions of the Lower Peninsula of Michigan. To mention a few places, there is Cross Village, Middle Village (the oldest Indian settlement in the region), Five Mile Creek, Harbor Springs, Petoskey and Burt Lake.

At this time one or two families in the community will cook a large supper, to which is generally understood all the Indians are invited. The word just gets around that some family is getting up a supper commemorating the spirits of their departed, hence, the name Ghost Suppers. To especially honor the memory of those who have gone to the “Happy Hunting Ground,” the family will invite a few people approximately of the same age of the deceased. Tobacco will be given to them if the person they are supposed to represent was a tobacco user; if not, some gift will be presented. Children are given candies or some little gift. Custom requires that these few especially invited guests come early enough, if possible, so that they will be among the first served.

The Indians go from one supper to the other, until they have made the rounds. Etiquette requires that they eat at least a little of each kind of food offered. After the last guest has been served, the remaining food is left on the table until midnight, or in some cases until morning so that the spirits may come and eat.

Years ago, it was not uncommon for as many as six or eight households in a community to have these suppers during an evening. Today with the smaller Indian population, fewer suppers are held, and an effort is being made to spread them more evenly throughout the week. From fifty to seventy-five and as many as a hundred guests are served in some homes. Because of the limited space in the average home, the guests are served in relays. The first table is set and ready around six o’clock, seating from twelve to sixteen people; when these have finished, a second table is set, and so on until the last have been served.

These feasts were not always held during the first week in November. They were held during the late spring and early summer and were accompanied with much dancing and singing and peace offerings. Groups of grown people and children would go from place to place saluting each other, saying, “We are going around in spirits.” At each place they would feast, dance and sing, and throw food into the fire, believing that the spirits would come and eat the food as it was consumed by the fire.

The change in the time for these feasts from the early part of the year to the first week of November was brought through the influence of missionaries, who saw the feasibility of aligning this custom with the feast days of their church, All Souls Day and All Saints Day.

In the time since my father wrote about ghost suppers much has changed in the world: we fly faster than sound, men walk on the moon, and we look deep into space with orbiting telescopes seeking to look back into the very beginnings of our universe. Our Odawa world has changed as well: the council fires once again are burning and the beat of the drums again echoes from the powwows where people are dancing for themselves, for their communities, and for Mother Earth. Those who have been keeping and guarding our ways have been reawakening the honor and respect for creation that is the central gift of our people.

Ghost suppers are still held all over northern Lower Michigan. In parish halls and in private homes, from Cross Village to East Jordan, from Peshawbestown to Petoskey, in Charlevoix, Harbor Springs, and Burt Lake, families are honoring their ancestors and keeping sacred fires burning. The people come by the hundreds to visit each other, tell stories, and honor the ancestors, teaching our children the old ways while preparing to walk with pride into the future.

Editor’s Note: A portion of this material appears in “Star, Songs and  Water Spirits: A Great Lakes Native Reader.” Used by permission. All rights reserved.