Both Democratic Party Presidential Candidates Say They “Stand by Mashpee”

The statements were issued in response to a call made last Friday to Mashpee Wampanoag Tribe Chairman Cedric Cromwell from the Bureau of Indian Affairs. During the conversation, the bureau informed Cromwell that the U.S. Department of the Interior Secretary David Bernhardt was ordering him to disestablish the tribe’s reservation. Former Vice President Joe Biden released this statement Tuesday:

“This past weekend, in the midst of a pandemic, the Trump Administration chose to expend effort and resources to attempt to remove land that the Obama-Biden Administration put into trust for the Mashpee Wampanoag Tribe and disestablish the Tribe’s reservation — before the Tribe had exhausted its ability to appeal in the courts. This is unacceptable and betrays an incredible disrespect for Mashpee rights.

U.S. policy has for too long broken trust with tribal nations. It’s time to choose a different path. One of the most important roles the federal government plays in rebuilding the nation-to-nation relationship is taking land into trust on behalf of tribes. It is critical for tribal sovereignty and self-determination. It preserves tribal histories and culture for future generations. It allows for economic development and helps support the well-being of tribal citizens. It helps to right the wrongs of past policy, including the dispossession by the U.S. government of 90 million acres of tribal land, nearly two-thirds of all tribal land. The Obama-Biden Administration recognized this vital responsibility and took more than half a million acres of land into trust for tribes — including for Mashpee Wampanoag Tribe.

The Supreme Court’s Carcieri decision made fulfilling that responsibility harder by restricting the federal government’s ability to put land into trust. When I served as Vice President, our Administration asked Congress to enact a clean fix of the Carcieri decision. We also included language in our budgets to make clear that addressing this decision was a priority. Our Department of Interior developed a post-Carcieri framework to determine if tribes were under federal jurisdiction before 1934, and our Department of Justice used this framework to defend the process of taking land into trust. Indeed, courts that reviewed decisions under that framework embraced Interior’s analysis. But the Trump Administration has callously reversed the Obama-Biden policies, and abandoned our nation’s treaty obligations to tribal nations.

Upholding tribal self-governance and sovereignty, respecting tribal reserved rights in treaties, and supporting the federal trust responsibility to tribal nations should be the cornerstones of our federal tribal policy. That’s why, as president, I will support a clean Carcieri fix.

I stand with Mashpee — and with all of Indian Country.”

The following is Sen. Sanders statement:

“I stand with the Mashpee Wampanoag tribe in their fight to restore lands that belong to them, and I oppose the disgraceful decision by the Trump Administration to disestablish their lands held in trust by the Department of Interior.

For far too long, the federal government has adopted policies that take land away from tribes, ignore treaty rights and interfere with tribal management of their own resources. We must reset the partnership between the federal government and Tribal Nations by putting land – and control of that land – back in the hands of tribes. 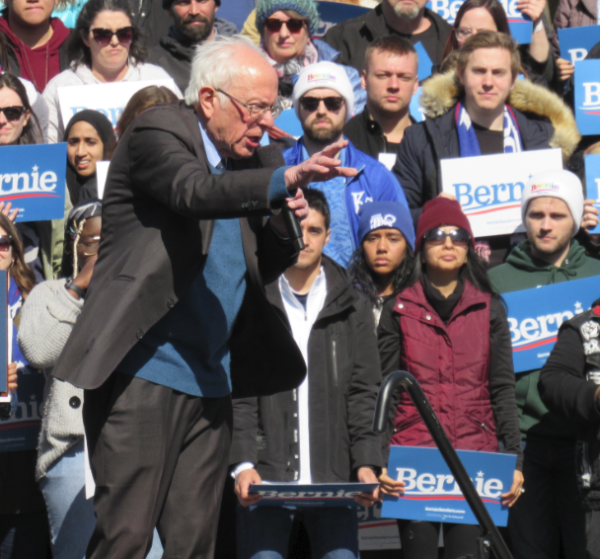 We need a clean Carcieri fix to reaffirm the authority of the Secretary of the Interior to take land into trust for all federally recognized Indian tribes. A Sanders administration will prioritize that.”