Wounded Knee Massacre 131 Years Ago: We Remember Those Lost 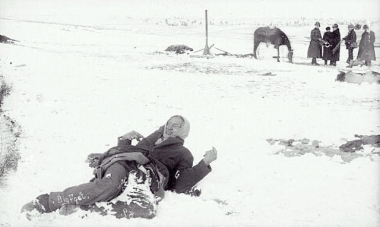 Opinion. Editor’s Note: This commentary was originally published by Native News Online in December 2013. It has been updated to reflect 131 years that have passed since the tragic day.

One hundred and thirty-one winters ago, on December 29, 1890, some 150 Lakota men, women and children were massacred by the US 7th Cavalry Regiment near Wounded Knee Creek on the Pine Ridge Indian Reservation. Some estimate the actual number closer to 300.

Snowfall was heavy that December week. The Lakota ancestors killed that day were left in brutal frigid wintry plains of the reservation before a burial party came to bury them in one mass grave. The photograph of Big Foot’s frozen and contorted body is a symbol for all American Indians of what happened to our ancestors.

Some of those who survived were eventually taken to the Episcopal mission in Pine Ridge. Eventually, some of them were able to give an oral history of what happened.

One poignant fact of the massacre has remained in my mind since first reading it. Every time I think about Wounded Knee, I remember this:

"It was the fourth day after Christmas in the Year of our Lord 1890, when the first torn and bleeding bodies were carried into the candlelit church, those who were conscious could see Christmas greenery hanging from the open rafters, across the chancel front above the pulpit was strung a crudely lettered banner: Peace on Earth, Good Will to Men," writes Dee Brown in Bury My Heart at Wounded Knee.

There was no peace on earth for the Lakota four days after Christmas.

Rightfully so, there is a movement afoot to strip those soliders of their medals.  Hopefully, Congress will see fit to pass the Remove the Stain Act in 2022. They must.

The Wounded Knee Massacre is a symbol for all American Indians of what happened to our ancestors.

History records the Wounded Knee Massacre was the last battle of the American Indian war. Unfortunately, it is when most American history books drop American Indians from history, as well. As if we no longer exist.

We remember those ancestors lost 131 winters ago on December 29.