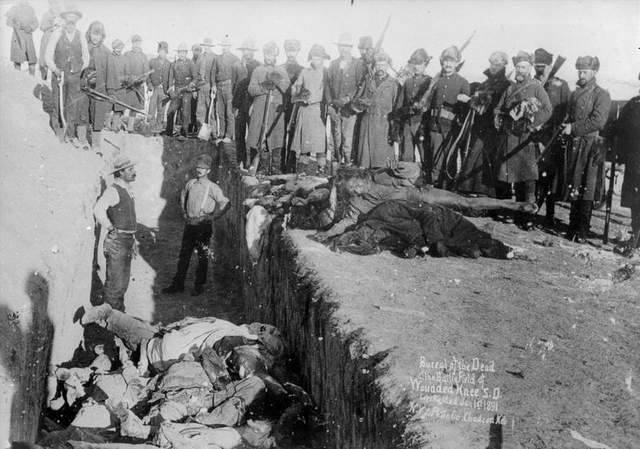 Earlier this month, 17 members of Congress wrote a letter to President Joe Biden to pressure him to use his authority to revoke the Medals of Honor given to soldiers who participated in the Wounded Knee Massacre.

The letter was authored by U.S. Senators  Elizabeth Warren (D-MA) and Jeff Merkley (D-OR), and Rep. Kaiali'i Kahele (D-HI), along with other 14 lawmakers.

“On December 29, 1890, U.S. Army soldiers mercilessly slaughtered hundreds of Lakota men, women, and children at Wounded Knee on the Pine Ridge Indian Reservation in South Dakota during what came to be known as the Wounded Knee Massacre,” the members of Congress write.

As the country's highest military honor, the Medal of Honor is awarded in the name of Congress for gallantry beyond the call of duty. Native Americans have wanted for decades the Medals of Honor to be revoked, because the sentiment is that the acts against innocent Lakota men, women, and children were not “gallant.”

“It has been over 130 years since the Wounded Knee Massacre, and yet, the actions of the U.S. Army and the bestowment of 20 Medals of Honor upon the perpetrators of the massacre remain a persistent shame on the nation. For the families and descendants of those massacred, the revocation of these 20 Medals of Honor would have a profound and lasting impact—as has the federal government’s ongoing choice to allow these wrongly bestowed honors to stand. It is well past time to remove this stain from our nation’s history, and we call on you to do so,” the lawmakers write.

Prior to being elected president, on January 15, 2020, former Vice President Joe Biden committed in a written statement to the Four Directions and Nevada Tribes Native American Presidential Forum that he supported the revocation of the Medals of Honor for the 1890 Wounded Knee Massacre.

“The Congressional Medal of Honor is our Nation’s highest award for gallantry in combat, in defense of our Nation’s highest ideals and principles. That this medal was awarded for the massacre of hundreds of unarmed Native Americans, including women and children, is abhorrent to those very ideals and lessens what the award represents in integrity and personal sacrifice for all others who have received it.” Biden wrote in his statement.

In September 2021, the House of Representatives included an amendment into the Defense Authorization Act for fiscal 2022 that comes from the ‘Remove the Stain Act’ (H.R. 2226), which calls for revoking the Medals of Honor.