Truth before Reconciliation: Lincoln Has Blood on His Hands 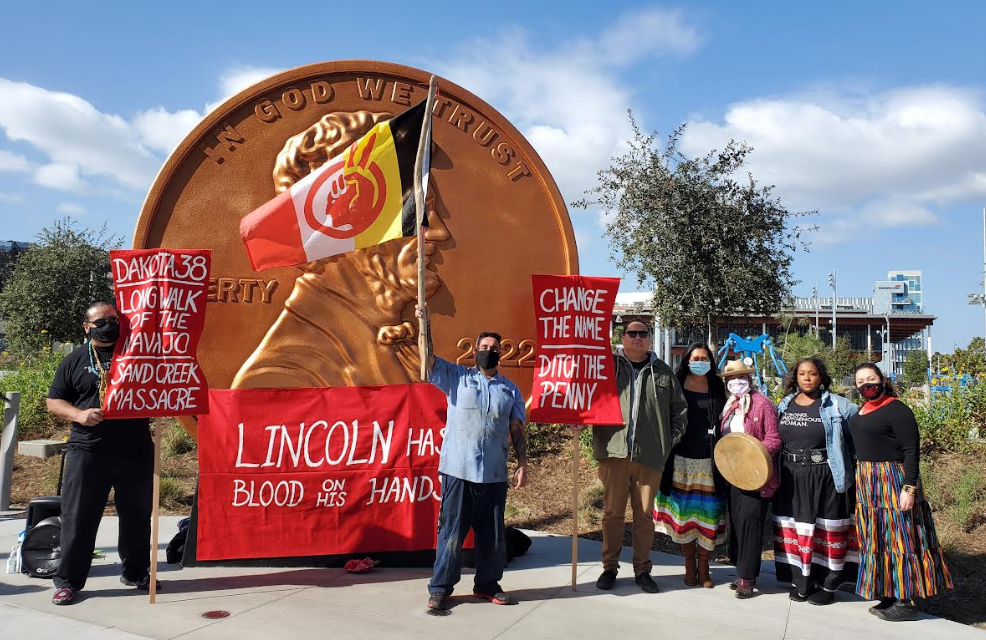 Guest Opinion. On a warm and breezy President's Day, the Long Beach Change The Name Coalition hosted a protest announcing their campaign to "Change the Name, Ditch the Penny," at Lincoln Park in Long Beach, CA. Native American community members from the Long Beach and greater Los Angeles areas, including local Gabrielino-Tongva/Ventureño-Chumash elder Tina Calderon, gathered to voice their opposition of the recent unveiling of a 13-foot penny statue as part of the park's reopening, previously closed since 2017.

The protest participants included Long Beach residents, individuals, and families from the Native community including educators, mental health professionals, cultural practitioners, community workers, and young children. "The city of Long Beach should not honor a mass murderer, and needs to begin to tell the true history of America's violent past in order for us to all heal," stated George Funmaker (Ho-Chunk/Dakota), a LB Change The Name Coalition member. "Genocide and ethnic cleansing were part of US policy, and Lincoln's actions were an attempt to terminate American Indians in order to steal the land." The Coalition called for challenging the master narrative and truth telling as part of reconciliation and healing. The protest gathering was the kick-off of their plan to put pressure on the Long Beach mayor, city council and public officials.

The LBCTN Coalition shared their request for Lincoln Park to be renamed with consultation with the first people of Long Beach - the Tongva; an official removal of the new penny monument and Lincoln statue, and a new monument in dedication to the Native Peoples of the Long Beach region, the Tongva. The Coalition states that the February 11, 2022 reopening of this park with the Lincoln name is a step backwards for the city and community of Long Beach, which is home to a strong Native American community.

Despite his reputation of penning the Emancipation Proclamation that freed enslaved African American people, the majority of Abraham Lincoln's policies and actions towards Native Americans spanned from detrimental to genocidal. Lincoln was responsible for the largest mass execution in United States history; in December 1862, 38 Dakota men were hanged under his order. These unfair convictions and executions of the Dakota 38+2 resulted from the aftermath of the US-Dakota War of 1862 in southwest Minnesota. In addition to executions, there were terrible, inhuman injustices to more than 3,000 Dakota people who were held captive, then forced to march west out of Minnesota. Also, beginning in 1863, the Lincoln administration oversaw the removal of 8,000 Navajos from the New Mexico Territory, forcing the Navajo to march 450 miles to Bosque Redondo in The Long Walk; more than 2,000 died before a treaty was signed. Also occurring under Lincoln’s watch was the 1864 Sand Creek Massacre in southeastern Colorado, which resulted in the deaths of hundreds of Cheyenne and Arapaho.

California is in a new era of righting the wrongs and confronting America’s genocidal acts and policies against Native People - across the state, in the past years, Californians have began to witness the removal of Christopher Columbus and Junipero Serra statues, and even the local California State University, Long Beach’s Prospector Pete statue - as well as the removal and renaming of harmful names - including S-word (“Squaw”) Valley in Northeast California. Also, in June 2019, California Governor Gavin Newsom issued an apology on behalf of the state to California Native American Peoples for the many instances of violence, mistreatment and neglect inflicted upon California Native Americans throughout the state’s history; at that time, he also announced the creation of a Truth and Healing Council to provide space for California Native Americans to provide their historical perspective, tell the truths, and share their experiences.

Per the Long Beach Change The Name Coalition, "With the George Floyd uprisings and growing awareness about these issues of truth telling, healing, and reconciliation - the reopening of this park and creation of the new penny monument is harmful, triggering and confusing. Honoring the Native People of these lands beyond these statements requires that the City of Long Beach tell the truth and atrocities of history; this requires extending beyond empty and symbolic gestures, including tangible actions by leadership to call out the minimization of genocidal acts and romanticization of Manifest Destiny."

An October 2015 Cultural Resources Study about the Long Beach Civic Center, which includes Lincoln Park, states the park did not qualify as a city landmark nor contributor to a landmark historic district, and should not be considered a historical resource. The study however, mentions that because of the Lincoln statue’s age, condition and history of being in the vicinity since 1915, the statue does warrant special consideration in local planning. The LBCTN attended the Long Beach City Cultural Heritage Commission meeting on Tuesday, February 22, to make public comment with their concerns; the Coalition also plans to continue voicing concerns at future meetings.

The LBCTN Coalition is a group of Native American community members including local Tongva tribal members, mental health professionals, educators, Native veterans and cultural workers. The Coalition's focus is on education, truth telling, and healing of historical trauma - done in alignment with the intention of the California Truth and Healing Council, which "bears witness to, records, examines existing documentation of, and receives California Native American narratives regarding the historical relationship between the State of California and California Native Americans in order to clarify the historical record of such relationship in the spirit of truth and healing."

Stephanie Mushrush is an enrolled tribal member of the Washoe Tribe of Nevada and California, and also Filipina. She works as a licensed clinical social worker/mental health therapist in the Los Angeles/Tongva region, She has previously contributed to Indian Country Today, Censored News, and  Last Real Indians.