The Great Stain: 10 Years After the Kalamazoo River Oil Spill 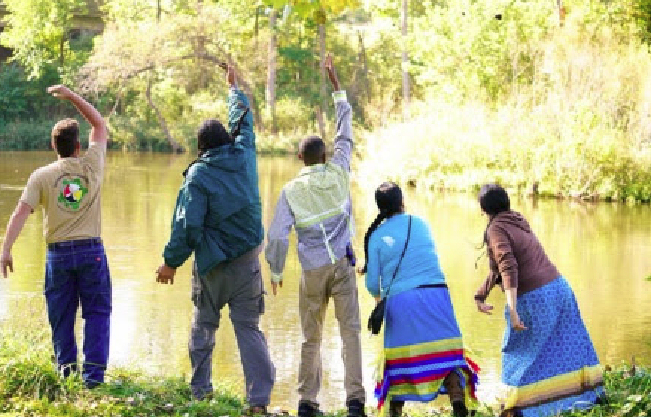 GUEST OPINION.  Most of us in southern Michigan, including the Nottawaseppi Huron Band of the Potawatomi (NHBP), knew that we shared our area with pipelines, but few of us knew much about them. On July 26, 2010 that changed forever. What had been silently beneath our feet delivering crude oil to refineries since the late 1960s suddenly became front and center in our collective consciousness, particularly that of the Tribe’s.

The Kalamazoo River has been a primary element of the Tribe’s lifeways and traditions for countless generations. It provided food, foraging opportunities, habitat, and transportation throughout its 130 miles of channel, which ultimately discharges at Saugatuck (which means ‘mouth of the river’) where its waters meet the waters of Lake Michigan.

Through the years, the river has been considerably abused through dams and pollution, including toxic chemicals, agricultural nutrients and oxygen-robbing sediment, yet the river has proved to be resilient and continued to provide habitat and recreational opportunities. Its resiliency was compromised when Enbridge’s Line 6B released approximately 1 million gallons of crude oil derived from the oil-sand fields in Alberta, Canada, bound for the refineries at Sarnia, Canada. The 30” diameter pipeline had a six-foot-long rupture and discharged its contents near Talmadge Creek in Marshall, Michigan. The creek is a tributary to the Kalamazoo River, and the entire Kalamazoo River watershed lies within NHBP’s traditional territory.

It was a disaster beyond the scope of any previous inland oil release in the United States. The impacts to wildlife were substantial and the cleanup along the area of the 35-mile-long spill was enormous. The use of the river for recreational, fishing and foraging purposes was prohibited until June 2012. This was particularly harmful for the Tribe because a number of tribal citizens rely upon the river, its tributaries and floodplains for not only the sustenance from the Wild Rice that grew naturally in the waterways, but also for medicine and spiritual nourishment.

Ten years later, we have learned much but many questions remain unanswered. Although much of the spill area now may appear to have been restored, the plant and animal diversity has been reduced and there is an entire generation of turtles missing. Effects to the smallest organisms, the ecosystem as a whole and long-term human health may never be fully understood. Certainly, the spirit of the people residing within the watershed and beyond has been permanently stained.

Perhaps the most important lesson we have learned is a heightened level of awareness. We are more aware of possible environmental hazards and are developing baseline inventories of where these potential hazards exist, how to possibly mitigate these hazards and what resources could possibly be impacted. The river has rightfully become more integrated into ourselves and is viewed less as an entity separate from ourselves. Our ancestors knew this and it is our responsibility to pass our lessons learned to those who follow us, so that this important lifeline is clean and accessible for the next Seven Generations and beyond.

Jaime Stuck is the tribal chairman of the Nottawaseppi Huron Band of the Potawatomi based at the Pine Creek Indian Reservation near Athens, Michigan.

John Rodwan is the director of the Nottawaseppi Huron Band of the Potawatomi’s Environmental Department.