The Apology that Fell Short: Pope Francis Did Not Go Far Enough 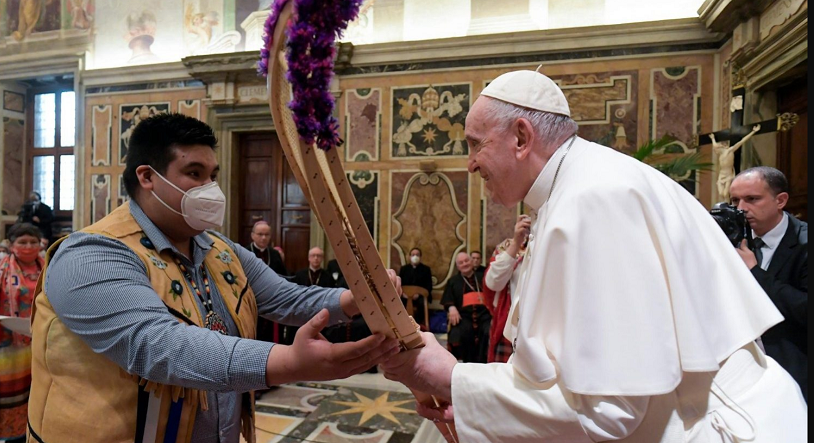 OPINION. Earlier this month, a delegation of some 100 First Nations, Inuit and Métis representatives made a pilgrimage to the Vatican City to meet with Pope Francis and other Roman Catholic officials to discuss the scars that remain from Indian residential schools in Canada.

Beginning in the late 1800s and continuing for a century, more than 150,000 Indigenous children were sent to residential schools in Canada. The Catholic Church was responsible for running three quarters of the 139 residential schools operated across Canada.

During this dark era of Canadian history, Native students were subjected to a concerted effort to strip them of their Indigenous languages and culture in an effort to assimilate them. In recent years, testimony from surviving students provided evidence of widespread physical, emotional and sexual abuse that led to deaths of Native students.

In late May 2021, the discovery of the remains of 215 children in a mass grave at the former Kamloops Indian Residential School in British Columbia was disclosed to the world. The disclosure shook the world, shining a spotlight on this dark era of forced assimilation. Within several weeks, several other unmarked graves were disclosed at other Indian residential schools in Canada that took the number of graves well over a thousand.

Since last summer, the Indigenous leaders in Canada have sought an apology from the Catholic Church.

On Friday, April 1, an apology came from Pope Francis as the Indigenous delegation gathered at the Vatican. The apology was picked up by the major media in Canada and the U.S. The New York Times headline read: “‘I Feel Shame’: Pope Apologizes to Indigenous People of Canada.”

“I feel shame — sorrow and shame — for the role” that Catholics played “in the abuses you suffered and in the lack of respect shown for your identity, your culture and even your spiritual values,” was a quote in the New York Times.

A closer examination of the entire, actual apology that was released by the church reads differently than how the Times reported it:

“I also feel shame. I have said this to you and now I'm repeating it, sorrow and shame, for the role that a number of Catholics, particularly those with educational responsibilities, have had in all these things that wounded you, in the abuses you suffered and in the lack of respect shown for your identify, your culture and even your spiritual values. All these things are contrary to the Gospel of Jesus Christ.”

The pope’s apology actually specifies those responsible for all the abuse to say “a number of Catholics.”

A few paragraphs later, he actually defends the “good and decent believers, who in the name of the faith, and with respect, love and kindness, have enriched your history with the Gospel.”

The apology did not go far enough and fell short of admission by the Catholic Church of wrongdoing on its part.

While condemning a number of Catholics, he suggests the good that the “good and decent believers” somehow placates the evil—that included physical, emotional, sexual abuse—done by others.

“To be honest the apology by #Pontifex reads more like a carefully worded statement made by the CEO of a major corporation after announcing the settlement of a class-action lawsuit in which the company paid a fine and admitted bad things happened but claimed zero institutional responsibility,” Native American author and activist Mark Charles (Navajo) wrote on his Facebook page.

The apology was lacking. It would have been more meaningful had Pope Francis said he was apologizing for the entire Catholic Church on behalf of all Catholics.

“While the apology is an important milestone, there is still much work to do. On the strength of this historic acknowledgement, the Church must push forward to address deniers within their congregations. The stories of residential school Survivors belong in Church services and Sunday schools. It was a great injustice that Catholics – and all people – must learn from,” attorney Murray Sinclair (Peguis First Nation), former senator and former chair of the Truth and Reconciliation Commission (TRC), said in a statement released on Wednesday.

Even though the apology did not go far enough, it was indeed historic. Pope Francis committed to visit Canada in July to meet with more Indigenous people.

I believe that his visit to the land where innocent Native lives were tragically lost in residential schools will carry more meaning for the victims and their descendants.

I am hopeful that by the time he visits, Pope Francis will move away from  corporate-style press statements and into authentic conversations with First Nations, Inuit and Metis people — as well as members of his own Catholic Church — about what happened and, importantly, why it happened.

Hopefully, Francis will fully acknowledge the atrocities committed were part of a system of abuse by the Catholic Church, which had responsibility to care for the Native children, but failed miserably because of the mass evil perpetrated against those innocent lives.

I hope he lives by his words to the First Nations, Inuit and Metis people:  “The memory of the past must never be sacrificed at the altar of alleged progress.”