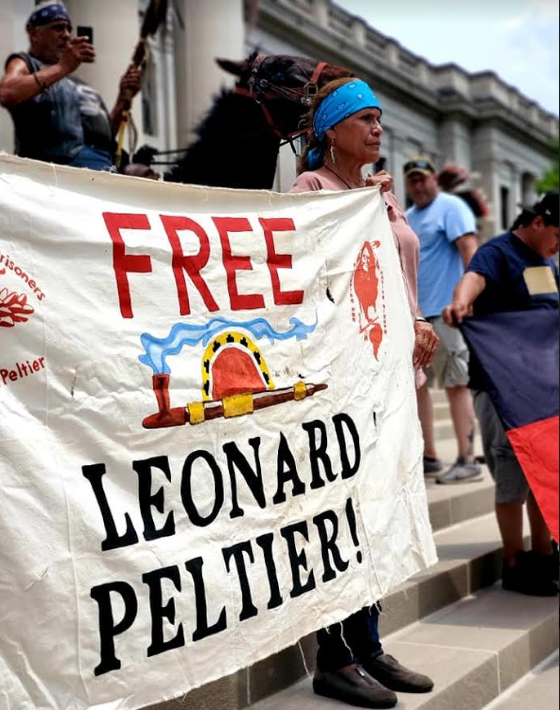 The long and sad imprisonment of Leonard Peltier (Turtle Mountain Chippewa Nation) took on a new complication on Friday when it was reported he tested positive for COVID-19 while incarcerated at the United States Penitentiary at Coleman, Fla. (USP Coleman 1).

Prison is not a great place to have COVID-19, especially if you are a 77-year-old man with comorbidities that include diabetes, hypertension, a heart condition and acute aneurysm, such as Peltier.

The Prison Policy Initiative reported in October 2021 that the COVID-19 death rate in prisons is more than double that of the general U.S. population, as calculated by the UCLA COVID-19 Behind Bars Data Project.

Peltier has been incarcerated for 46 years for the killing of two FBI agents at Oglala on the Pine Ridge Indian Reservation in South Dakota in 1975.

To many American Indians, Peltier is a symbol of an oppressive federal system that relegates Native people to apartheid and neglect. He is a political prisoner that we may only think about if we happen to see a bumper sticker on the back of a vehicle that reads “FREE Leonard Peltier.”

The International Leonard Peltier Defense Committee (ILPDC) on Saturday afternoon distributed a news release saying the federal prisons acted recklessly in regard to Peltier’s care. Peltier has yet to receive a COVID-19 booster shot, 11 months after his last vaccination.

The ILPDC noted in its news release that visitors to USP Coleman 1 have observed that the facility is not mandating vaccines for guards or staff. Guards and staff have been seen improperly wearing masks or not wearing them at all. Social distancing was not encouraged or enforced and booster shots had not, until recently, been available to any inmate at USP Coleman 1.

Soon after the onset of the COVID-19 pandemic, then U.S. Attorney General William Barr issued U.S. Department of Justice guidelines for COVID Release to Home Confinement for inmates who were elderly or with compromised immune system or co-morbidities on March 26 and again, April 3, 2020.

Peltier’s age and comorbidities unequivocally make him eligible for home release under Department of Justice guidelines. Peltier’s tribal community on the Turtle Mountain Indian Reservation in North Dakota has repeatedly expressed willingness to ensure he is provided adequate housing there.

“I commend your administration’s commitment to righting past wrongs in our criminal justice system. In continuing that work as you consider recommendations for individuals to receive clemency, I write to urge you to grant a commutation of Leonard Peltier’s sentence. Mr. Peltier meets appropriate criteria for commutation: (1) his old age and critical illness, (2) the amount of time he has served, and (3) the unavailability of other remedies. Given these factors, Mr. Peltier should be granted a commutation of his sentence,” Chairman Schatz wrote.

Beyond Peltier’s current battle with COVID-19, the White House needs to review Peltier’s 1977 case, in which two of his co-defendants were acquitted on the basis of self-defense against the FBI.

Peltier was tried separately from his co-defendants.

According to Kevin Sharp, former Chief Judge for the U.S. District Court for the Middle District of Tennessee, who Peltier’s current attorney, Peltier’s trial was replete with prosecutorial misconduct, falsified testimony and fabricated evidence. Even the autopsy presented to the jury was done by an examiner who had never seen the bodies of the two agents.

The former U.S. Attorney for the Northern District of Iowa, James H. Reynolds, who supervised the post-trial sentencing and appeals, admitted they “shaved a few corners” and “we could not prove Leonard Peltier personally committed any crime on the Pine Ridge Reservation” said in a letter to President Biden last year.

On behalf of all Indigenous people in the U.S. and across the globe, enough is enough. We call on President Biden to commute the sentence of Leonard Peltier.