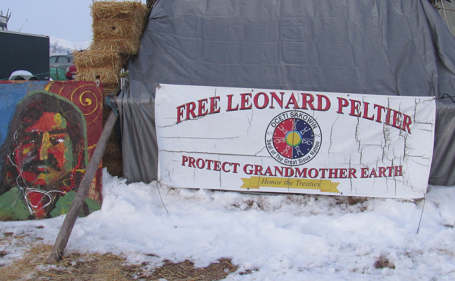 “Today, Leonard tested positive for COVID,” Peltier’s attorney Kevin Sharp told HuffPost late Friday. “We are all very concerned, as is Leonard. He wanted people to know that he sends his love and appreciation for the years everyone has fought for him."

Accordng to the HuffPost article, Peltier has not received his vaccination booster shot.

Peltier’s health has long been a concern for those seeking his release from prison for his conviction of killing two FBI agents at Oglala on the Pine Ridge Indian Reservation in 1975. He suffers from heart problems and diabetes.
Supporters believe that Peltier was wrongfully convicted in 1977 for a crime he did not commit. Imprisoned for more than 46 years, Peltier has the support of Amnesty International, and other human rights organizations. Over the years, some 50 members of Congress and others — including Judge Gerald Heaney (8th Circuit Court of Appeals) who sat as a member of the court in two of Peltier’s appeals — have called for his immediate release.

Schatz cites Peltier’s advanced age, illness, and a loophole in current laws that unfairly disqualifies Peltier from compassionate release. While legislation led by Schatz to fix the loophole continues to be considered in Congress, that process can take years – time Peltier may not have.

“I commend your administration’s commitment to righting past wrongs in our criminal justice system. In continuing that work as you consider recommendations for individuals to receive clemency, I write to urge you to grant a commutation of Leonard Peltier’s sentence. Mr. Peltier meets appropriate criteria for commutation: (1) his old age and critical illness, (2) the amount of time he has already served, and (3) the unavailability of other remedies. Given these factors, Mr. Peltier should be granted a commutation of his sentence,” Chairman Schatz wrote in his letter to President Biden. “Mr. Peltier has consistently maintained his innocence because the facts of his case, as well as the actions of federal agents and prosecutors involved, raise serious questions about whether he received a fair trial.”

"REPORTER: Yesterday, Senator Schatz, who chairs the Senate Indian Affairs Committee, wrote to the President, asking him to commute the sentence of Leonard Peltier, a Native American activist who was convicted of murder in a very controversial trial about four decades ago.  Is that something the President is considering or taking a look at, at this time?

MS. PSAKI:  I don’t have anything to predict for you on that front."

Editor's Note: This is a developing story that will be updated as more news becomes available.