It’s Time to “Take Back What Was Stolen” from Jim Thorpe, World’s Greatest Athlete

OPINION.  It was 108 years ago today, July 15, 1912, when Jim Thorpe (Sac and Fox, Potawatomi) was bestowed two Olympic gold medals by King Gustav of Sweden at the conclusion of the 1912 Olympic Games, after winning the decathlon and pentathlon in Stockholm.

To many Native Americans and non-Native people alike, Thorpe is an iconic hero, so much so that when King Gustav awarded him two Olympic gold medals the king said to him, “You, sir, are the greatest athlete in the world.”

He was orphaned as a child and placed in the Carlisle Indian Industrial School, an Indian boarding school, which he attended from 1904 to 1913. He represented the United States at the Olympic games 12 years before American Indians gained U.S. citizenship. On the transatlantic trip to Stockholm, Thorpe and a Jewish teammate were forced to travel in the bottom of the ship, while the white American Olympic athletes received first-class accommodations.

Even in Stockholm Thorpe had to contend with obstacles. On the morning of his competitions, his shoes were stolen shortly before his first event. Wearing shoes found in a trash can (one too big, the other too small) Thorpe won the gold in the decathlon; with a 25-yard lead.

A year later, the International Olympic Committee (IOC) stripped Thorpe of his Olympic gold medals because they discovered he had been compensated—payment amounted to the costs of his room and board—for playing minor league baseball prior to participating in the 1912 Olympics. Back then, the IOC’s rules barred athletes from participating in the Games if they had previously been compensated for playing any sport prior to the Olympics. 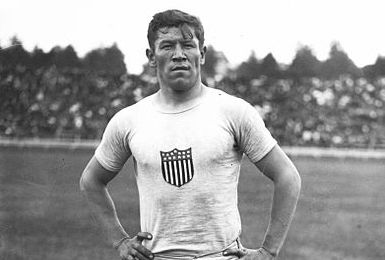 The IOC erased his records from the Olympic record books. To those concerned with Thorpe’s legacy and historical accuracy, his medals and records were stolen from him. Many athletes have been found guilty of having been compensated for participating in sports prior to competing in the Olympics, some in the same era as his, but have not had to pay the penalty Thorpe did.

“The IOC’s decision in 1912 to strip Thorpe’s medals and strike out his records was not just intended to punish him for violating the elitist Victorian codes of amateurism. It was also intended to obscure him—and to a certain extent it succeeded,” writes Sally Jenkins, in Smithsonian Magazine in July 2012.

Attempts to have the medals returned were not rewarded until 1982, almost 30 years after Thorpe's death (1953), when replicas were delivered to his family. Even though the gold medals were reinstated, the IOC did not restore Thorpe’s records in Olympic history.

The IOC did not go far enough.

To correct this great injustice in sports history, in November 2019, Representative Deb Haaland (D-NM), one of the first American Indian women elected to Congress, introduced a resolution in the U.S. House of Representatives to recognize the achievements of Thorpe requesting the IOC correct the 1912 Olympic records. The resolution has the support of 20 original cosponsors in the House.

“Any person who has represented our country honorably and brought victory home for the United States in the Olympics is an American hero and should be recognized as one, but inherent biases took away that honor from Jim Thorpe. This resolution not only recognizes Jim Thorpe for the hero that he is, it also ensures that the records reflect his incredible achievements,” said Rep. Haaland.

Today, 108 years after Thorpe was awarded the Olympic gold medals by King Gustav, Pictureworks Entertainment, the National Congress of American Indians, and several of Thorpe’s descendants announce the launch of “Take Back What Was Stolen,” an initiative to restore Thorpe’s status as the sole gold medal champion of the 1912 Olympic decathlon and pentathlon––after Thorpe was stripped of his medals, the athletes he’d beaten had their silver medals elevated to gold. The IOC allowed his competitors to keep their golds even after they had returned Thorpe’s medals. He was relegated co-champion.

Part of the initiative is the #BrightPathStrong petition, which calls for the IOC to take the necessary steps to right history.

The “Take Back What Was Stolen” petition is part of a series of initiatives tied to “Bright Path,” an upcoming feature film chronicling Jim Thorpe’s life and legacy from Pictureworks Entertainment. You can sign the petition at brightpathstrong.com.

Monday’s announcement that the Washington NFL franchise would finally be retiring the team's racist name demonstrates that “never” doesn’t always mean never. Dan Snyder, the franchise owner, once told a reporter to capitalize the word “never” after being asked when he would consider changing the offensive name.

Just as it was time for the Washington NFL team to change its name, it’s time for Jim Thorpe to be accurately and properly recognized in Olympic history.