Opinion. The day before last week’s White House Tribal Nation Summit kicked off, the National Congress of American Indians (NCAI) and the National Indian Health Board (NIHB) held a meeting with several dozen tribal leaders from across Indian Country at the Capital Hilton. They met to prepare for high-level discussions with high-ranking Biden administration officials that would take place at the summit.

Outside the meeting room, a sign produced by the National Council of Urban Indian Health (NCUIH) read: “Native Lives Can’t Wait…It’s time for stable funding for the Indian Health Service.” The sign foretold a topic that would surface in discussions over the course of the next couple days when the summit convened on Wednesday and Thursday.

At issue is the fact there is no permanent federal funding for healthcare for Indian Country.

Even though the federal government has trust responsibilities to tribes, each year federal appropriations must be passed by Congress in the annual federal budget.

Advance appropriations would mean money would be appropriated for the next year or two without risk losing funding if there is a federal government shutdown.

Tribal leaders want to have advance appropriations like the Veterans Administration, Medicare and Medicaid.

“Every time the federal government shuts down — or Congress fails to pass an appropriations bill — our peoples’ health care suffers,” NIHB President Stacy A. Bohlen said to me outside the tribal leaders’ meeting.

NCUIH reports that during the last shutdown from 2018-2019, most urban Indian organizations had to cut services or close their doors entirely, forcing them to leave their patients — who are already vulnerable — without adequate healthcare. The unfortunate result for Native Americans  is a  lack of prescription drugs, unnecessary illnesses and even death.

On Thursday during the White House Tribal Summit, Penobscot Nation Chief Kirk Francis moderated a fireside chat with U.S. Department of Health and Human Services (HHS) Secretary Xavier Becerra and Indian Health Service (IHS) Director Roselyn Tso. Before he began interviewing the two federal officials, he talked about how unstable tribal health funding hit home for his tribe the last time there was a government shutdown.

“Delayed funding caused one of our citizens to not get the [medical attention] that she needed that would have identified life-threatening cancer at an earlier stage,” Francis said. “Another, only due to an emergent event, had her cardiology issue identified. It delays in being able to protect our citizen’s immediate inpatient substance abuse disorder treatments [that] can be the difference between life and death.”

Also on Thursday, over 120 groups, including urban Indian organizations came together to send letters to President Biden and congressional leadership that request support for the House-passed funding of $8.121 billion for the Indian Health Service for Fiscal Year (FY) 2023 and advance appropriations for FY 2024. 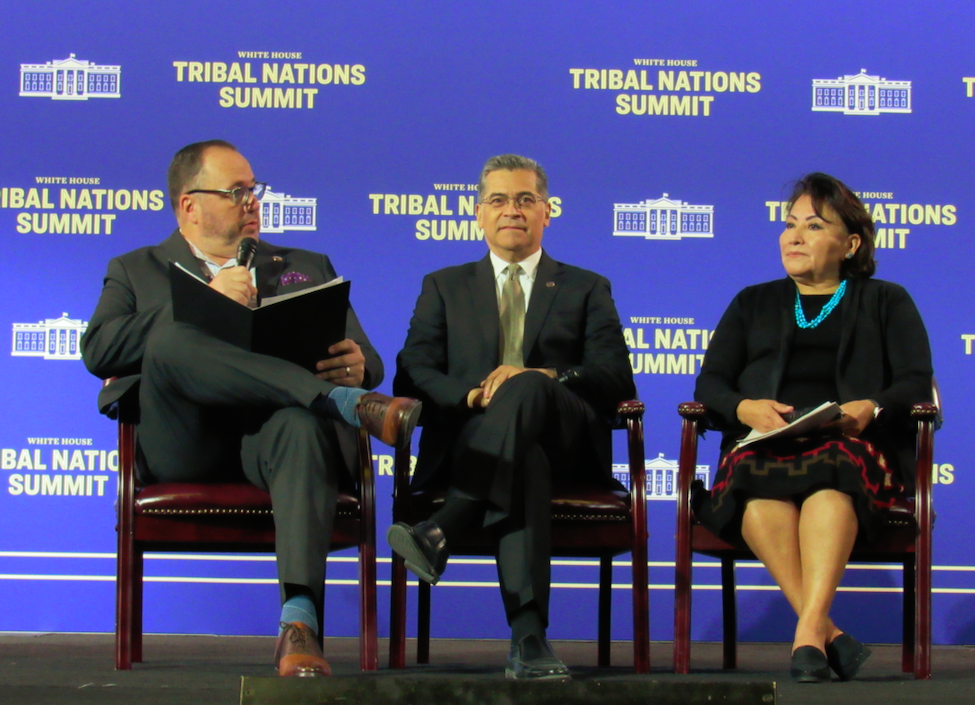 Currently, there is bipartisan support for ensuring advance appropriations and ending budget interruptions for the Indian Health Service. Some 107 current members of Congress have expressed their support for advanced appropriations.

“IHS is the only major federal provider of healthcare that faces budget uncertainty. It's time for Congress to guarantee predictable funding and end this inequity,” Sen. Elizabeth Warren (D-MA) said.

Fortunately, President Joe Biden understands the need for mandatory funding for healthcare for Indian Country. On Wednesday, he reminded tribal leaders that his current budget included $9.1 billion in mandatory funding, an increase of $2.9 billion above 2021. After that, IHS funding would automatically grow to keep pace with healthcare costs and population growth and gradually close long standing service and facility shortfalls.

The latest available figures from the Government Accountability Office (GAO) finds that in 2017, per capita spending for IHS was $4,078.  By comparison, the per capita spending was $13,185 for Medicare, $10,692 for the Veterans Health Administration, and $8,600 for federal prisoners.

You can see there is more work for Congress to do to ensure Native Americans have access to quality healthcare. It’s time for Congress to approve advance appropriations for the Indian Health Service.