Instead of Will Smith and Chris Rock, We Should Discuss Judge Jackson’s Confirmation Hearings 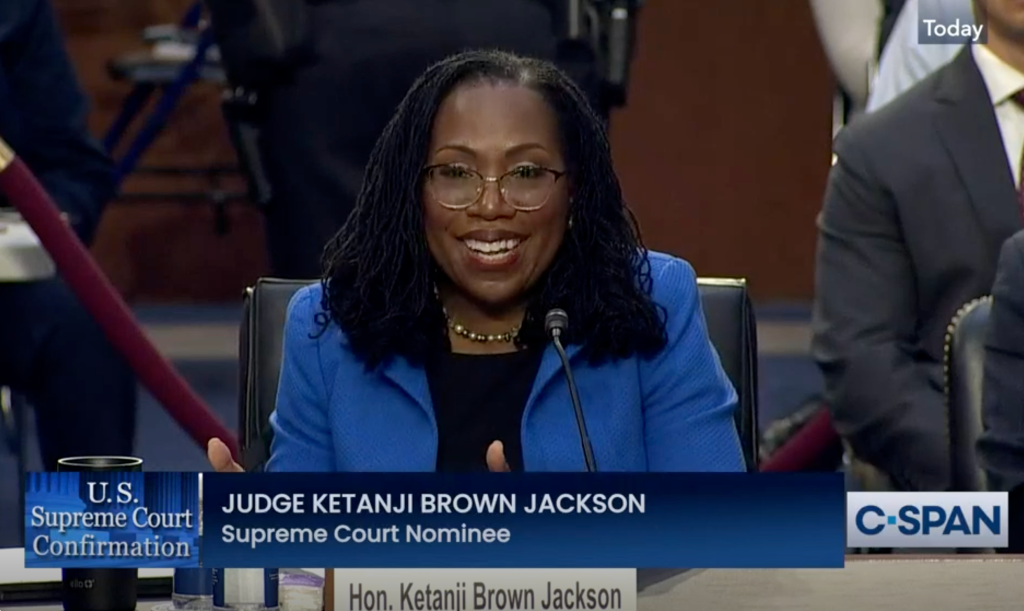 The slap spurred countless conversations and social media posts during the past week with most falling into two camps: those who admired Smith for defending his wife after Rock told a joke about her, or others who supported Rock and denounced the slap as an act of violence.

Comedian George Lopez weighed in by likening the situation to a divorce where kids are made to choose between two parents. “I’m staying with my dad and Chris Rock,” Lopez joked to People on Wednesday.

The public was certainly intrigued by the scene that lasted less than a couple of minutes and will have virtually zero impact on their lives.

Meanwhile, another tussle that played out on TV over the past few weeks seemed to capture just a fraction of the public’s attention, even though the implications of that scuffle may loom large for years.

I am talking about the televised badgering and gross disrespect shown by GOP senators on Capitol Hill to Judge Ketanji Brown Jackson, who is President Joe Biden’s nominee to join the Supreme Court and fill the seat being vacated by retiring Associate Justice Stephen Beyers.

Some GOP senators sought to press Judge Jackson on her record as a district judge in sentencing those guilty of child pornography crimes. They said she was too lenient. An analysis of by the Washington Post of showed that “according to a 2020 U.S. Sentencing Commission report, less than 30 percent of non-production child-porn offenders received a sentence within the guideline range.”

Sen. Ted Cruz (R-TX) spent his time verbally slapping Judge Jackson over critical race theory complete with blow-ups about Antiracist Baby, a children’s book about race. He asked the judge, “Do you agree with this book that is being taught to kids that babies are racist?”

Sen. Lindsay Graham (R-SC), who just last year voted for Judge Jackson’s confirmation to the U.S. Court of Appeals, asked her, “What faith are you, by the way?” That’s a question that is likely illegal under federal law, but Jackson began to answer, only to be rudely interrupted by Graham.

Instead of a two-minute slap heard ‘round the world, Judge Jackson had to endure two days of mostly White Republican senators who seemed pleased to bully a Black woman. The whole debacle was appalling to me. The senators’ disrespect speaks volumes about how successful Black and Native American women are treated in today's society.

The silence by Americans speaks volumes about how we simply accept the treatment of women of color.

Some argue President Biden should not have specified he would name a Black woman to the highest court in the land. He did so to fulfill a campaign promise made during a Democratic presidential debate in South Carolina.

Given the imbalance of the U.S. Supreme that has been 95 percent white males throughout the history of the United States, I am proud Biden made that promise and eagerly await for him and future presidents to make the same promise to do so with a Native American—female or male—in the future.

Considering the gross imbalance of shared power throughout, I have always been a supporter of affirmative action when it comes to equality issues.

After 12 hours of testifying before the Senate Judiciary Committee on Tuesday night, Judge Jackson was questioned by Sen. Alex Padilla (D-CA) on voting rights and tribal sovereignty. Her response:

The National Congress of American Indians (NCAI) and the Native American Rights Fund (NARF) wrote a letter to U.S. senators this past Monday endorsing her nomination and requesting swift confirmation.

“Based on her qualifications, integrity, and respect she has throughout the legal profession, we believe that Judge Jackson is uniquely qualified to serve on the U.S. Supreme Court. Our federal courts and especially the highest court in the United States must be more representative of the governments and people they serve. NCAI and NARF support the nomination of Judge Ketanji Brown Jackson and call for her swift confirmation," the letter reads.

The Senate Judiciary is set to vote on whether to advance Judge Jackson’s nomination to the full Senate on Monday, April 4, 2022.