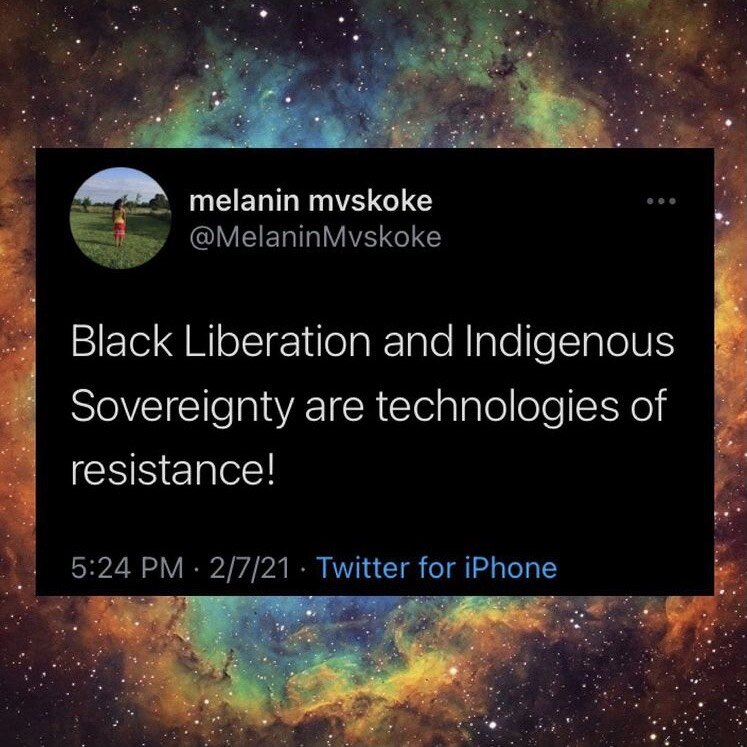 GUEST OPINION “What is Black Liberation and Indigenous Sovereignty?” I ask myself this question regularly and have spent countless hours reading and digesting the works of scholars and academics, thought leaders and activists, community organizers and peers. Folks who do and live/have lived this work, who dream/have dreamt up technologies of resistance, and who have translated those ideas into research, books, opinion/think pieces, art, and community-led movement.

It is in this question that I have developed my politics and have gained a greater understanding of what sovereignty and liberation are.  And it is by regularly returning to this question that I’ve found the boldness to speak to this idea of an authentic, sovereign Indigenous future and a fully realized, Black liberated future.  Not, however, as an authority on either subject but as a Black and Native person who is deeply invested in both of my communities.  As a willing participant in these movements of refusal.   Ultimately, it is my hope to contribute something genuine to the discourse and something tangible to the work that progresses us forward towards that which is actually possible.

This piece was originally published by The U.S. Department of Arts and Culture, "a people-powered department — a grassroots action network inciting creativity to shape a culture of empathy, equity, and belonging." It is republished here with permission.

Therefore, my present understanding of Black Liberation and Indigenous Sovereignty is grounded in the notion that white supremacy, settler colonialism, and racial capitalism must be interrogated and dismantled. That an authentic sovereign Indigenous future is rooted in the fundamental belief that Indigenous peoples (globally) have the inherent right to self-governance, self-determination,  and political and social autonomy. That the contemporary “Land Back” movement is an articulation of our absolute right to be in relation with the land and to steward it as in the days of our ancestors.  Where the land is set free from capitalism and commodification. Where it is no longer deemed private property as a means of delegitimizing Indigenous people’ relationship with it. A  sovereign Indigenous future is also one where our epistemologies and understandings of the  natural world are honored and respected as legitimate, scientific knowledge. It is also a future  where the violence of white supremacy and the ongoing policies of settler colonialism no longer  contribute to the erasure and genocide of our tribes, nations, communities, or families.

Additionally, a fully realized Black liberated future, in my opinion, is one rooted in the  fundamental belief that Black people (globally) are also sovereign and have the right to self determination and autonomy. Where our bodies and our lives are no longer commodities of  white supremacy and racial capitalism, but instead belong to us, to do as we please with them.  Where our health outcomes, quality of life, and life expectancies are not determined by our  positionality within this racialized hierarchy. Where our indigeneity to the lands of our ancestors  is also recognized and affirmed. Where proximity to whiteness is of no value and European  beauty standards don’t supersede our acceptance of Black beauty and love for self. Where we  bask in our cultures and ways of existing while rejecting the gaze and limitations thrust upon us  by those who rather see our demise than see us free! And finally, where our humanity fully is realized.

Additionally, I fundamentally believe our arrival at Black Liberation and Indigenous Sovereignty will certainly require us to remember who we are outside of our oppressors’ institutions, ideologies, and  imaginations. It is a future that will ask us to internalize and embody the notion that  subjugation is neither our birthright nor our inheritance. It will demand that we forfeit any loyalties to our current positioning and divest from any misguided belief that this is our lot. It is  not! Our destination of freedom will also challenge us to see ourselves and one another as worthy of something better than this!!

If we expect to achieve this future, it will be our responsibility as Black folks and Native peoples to continue the work of those who came before us. To deconstruct the colonizer and the oppressor in our hearts, in our communities, and in our understanding of the world, with intentionality. To dismantle institutions that dehumanize us and to refuse ideologies of systems that seek to commodify and profit off our oppression. It is imperative that we remember that both of our peoples have  always been the authors of our liberation and the architects of our deliverance. That our ancestors were never passive in their subjugation but instead active participants in their fight towards freedom. That is the legacy we have been entrusted with. So as contemporary stewards  of this work, it is our responsibility to continue imagining the future fought for by our  predecessors while simultaneously envisioning a world and a future more brilliant than what our  oppressors have planned for us.

It is also my hope that as we build this future, prepare to inhabit it, and leave it to our descendants as  an inheritance that we understand the value of solidarity and community. Within community and between communities. As I absolutely believe that Black Liberation and Indigenous Sovereignty are compatible movements of freedom. Black and Native folks have had to navigate this white supremacist, settler colonial, racial capitalist project for hundreds of years both independently and also in cooperation. Without romanticizing our past, we understand that there have been moments of authentic solidarity as well as moments of lateral harm and violence.  There have been moments of victory and moments of failure.

Both of our peoples understand that existing within these systems has been hard. It has been brutal, unrelenting work. And through it all, our oppressors have always sought to pit us against one another. They have at times even required us to stand in for them against one another. These are the realities we must be honest about and it is our responsibility as Black folks and  Native peoples to acknowledge and address these harms. To talk through them. To try and see one another instead of erasing one another. To contextualize all this so that we can find a way to empathize with one another. Ultimately, we should want more for one another  instead of seeking to  replicate the evils and violence of our oppressors, as we understand what it means to have to endure under these systems and should, therefore, want no person to ever share in such misery.

And while I believe it is for Black folks and Native peoples to lead the way and be active participants in the building of our futures, I think it’s equally important for non-Black and non-Native peoples to participate as well. Everyone has a responsibility to divest from anti-Blackness and to respect Indigenous sovereignty (and specifically tribal sovereignty). And for those who carry the political, legal, and social currency of whiteness and benefit from these systems that oppress and attempts to stifle the future of Black, Indigenous, and other people of color, I believe it is their responsibility to use their currency to dismantle said systems with the intention of forfeiting their privilege and positionality within this hierarchy.

Finally, I will admit I am sometimes an overly hopeful person but I have learned to temper that hope with reality. So while I have hope in Black folks and Native peoples, I don’t expect perfection from us. I understand that in an attempt to build community and consensus we will be challenged. Doing this together will absolutely be hard work! We will undoubtedly make mistakes and will disagree. There may even be times where we don’t like one another. But none of those obstacles are reasons to stop pursuing what we deserve, Black Liberation and Indigenous Sovereignty!

SO HERE’S TO OUR FUTURE!

Amber Starks, (aka Melanin Mvskoke) is an Afro Indigenous (African-American and Native American) activist, organizer, cultural critic, decolonial theorist, and budding abolitionist. She is an enrolled citizen of the Muscogee (Creek) Nation and is also of Shawnee, Yuchi, Quapaw, and Cherokee descent.