At 92, Oren Lyons is Still Working to Promote Native Rights and His Beloved Lacrosse 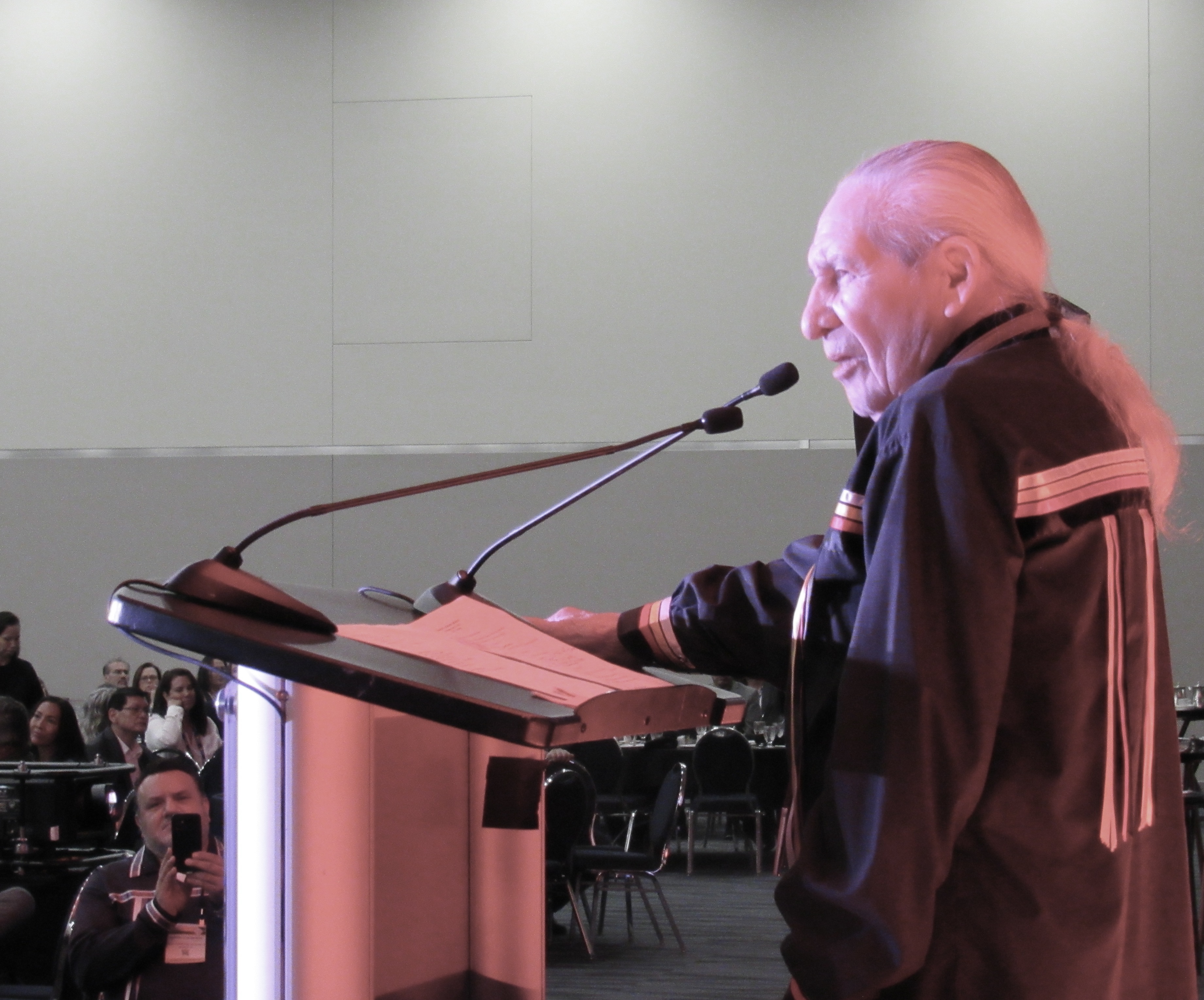 ANAHEIM, Calif. — Onondaga Faithkeeper Oren Lyons was greeted with a standing ovation at the Indian Gaming Association (IGA) 2022 convention this past week. Lyons, who is 92, was being honored with the organization’s 2022 Lifetime Achievement.

The IGA award is one of many he’s received over the decades, in a life filled with challenges and accomplishments. He played college lacrosse at Syracuse University, served in the U.S. Army and eventually became a professor, artist, spiritual leader and a leading advocate for Native American rights. He’s been inducted into the National Lacrosse Hall of Fame, Native American Hall of Fame, and received the Ellis Island Medal of Honor.

Still, the honor last week at IGA seemed to stir something in Lyons, who was both appreciative and pointed in his remarks at the award ceremony.

“It’s always an honor to be recognized by your own people. I appreciate that so much,” Lyons said, before launching into a 20-minute speech filled with fire, wisdom and a bit of prophecy. He gave the crowd an analysis of the condition of the world and admonished them to take care of their land and water.

“As the world is struggling to overcome an international crisis of the pandemic, of all things, you have a country like Russia creating a war. That’s how stupid they are. That is how greedy they are. It’s not new to us.

His points made, Lyons transitioned to speaking about one of his great passions in life: lacrosse, which Indigenous people often call “the Creator’s game.”

Lyons, the co-founder of the Iroquois Nationals, made a plea for support of the lacrosse team, which needs to raise money to get back to the World Games this summer so they’ll be able to compete in the 2028 Olympics in Los Angeles.

The team — which is now known as the Haudenosaunee Nationals — is lacrosse squad of the confederacy of the Seneca, Cayuga, Onondaga, Oneida, Mohawk and Tuscarora nations that have remained independent and sovereign. The Haadenosaunee are the originators of the game of lacrosse.

The Haudenosaunee Nationals are currently ranked third in the world out of 76 teams.

“We travel with the Haudenosaunee passport, we do not carry a U.S. passport,” Lyons said. “It has not been easy, but we have been to many, many countries.”

Lyons recounted the struggle it has been for the Haudenosaunee to get recognized by the Olympic Committee as a stand-alone nation.

“You are not a nation, they told us,” Lyons said. “I told them we were a nation before the United States became one in 1776.”

The Haudenosaunee Nationals have an immediate need to raise $600,000 so that they can get ready for the Olympics. This year alone, the team will travel to compete in Maryland, Alabama, and Ireland. Additional money is needed for the youth development program because the young Natives who will compete for the Haudenosaunee Nationals at the 2028 Olympics are now in their early teens, but they have to be ready.

Later on Wednesday, I visited the Haudenoszaunee Nationals booth at the IGA tradeshow. I was able to sit down with Lyons for an interview, during which he gave me a great history lesson about the Iroquois Nation, which dates back thousands of years.

I’ve known Lyons since the 1990s, when he came to speak at the local American Indian Center that I used to run in Michigan. He delivered an impassioned keynote address on sovereignty rights and the importance of preserving Mother Earth.

A few days later, the mayor of Grand Rapids told me he took 14 pages of notes during Lyons’ speech.

Lyons and I have remained friends. During the COVID-19 pandemic, he called me to inquire about my well-being. I was a bit embarrassed because Lyons is my elder, and I should have been the one who initiated a call to find out if he was okay. I still think about that call and my embarrassment today.

Lyons, though, doesn’t dwell on the past. Even at 92, he’s looking ahead.  He’ll be 98 when the summer Olympics arrive in Los Angeles.

As I sat listening to him in Anaheim this week, I realized I was talking to one of Indian Country’s true treasures. And that makes him one of America’s treasures.

To donate to the Haudenossuee Nationals, make all checks payable to: