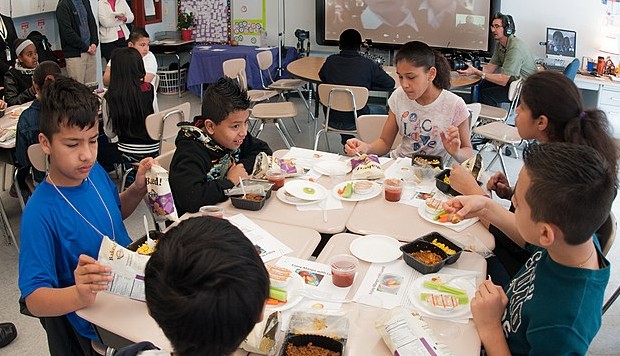 After providing free meals for children nationwide from the onset of the pandemic, many families — including Native ones — will return to paying some or all of the cost of their school lunches, once a significant set of waivers ends September 30.

The federal government has provided free and reduced lunch to children around the nation via the National School Lunch Program for decades. In 2020, in response to the COVID-19 pandemic, the U.S. Department of Agriculture began providing waivers to states that defrayed the cost of providing meals to students in school districts around the country.

In the wake of rising food costs and rapid inflation, many families will find themselves again paying hundreds of dollars a year for student meals.

Many Native families were already stretched financially even prior to the pandemic. According to the U.S. Census Bureau, the poverty rate for Native Americans is just over 25 percent.

“Many fall under there,” Toni Stanger-McLaughlin, CEO of the Native American Agriculture Fund and citizen of the Colville Confederated Tribes, told Native News Online. “We also have a lot that fall right above that level. Those are the families that are going to be affected.”

“We really see this as going off a cliff,” said Katie Wilson, executive director of the Urban School Food Alliance, which works with many of the nation’s largest school districts and put its support behind a letter calling for extensions to the waivers.

USDA spokesperson Alan Shannon said that there are no concrete plans at present to extend the waivers past September 30. “We don’t have any information,” he said. “I don’t want to speculate on that.”

In pre-pandemic circumstances, school administrators and district personnel would publicize the process of applying for free and reduced lunch, which includes providing income verification and other household details.

Native children and their families face some common issues in filling out the application, including the stigma that comes with doing so. In years past, both children and school nutrition personnel have decried the stigma that comes within getting free or reduced-price lunches. The waiver program helped alleviate the stigma since it applied to students across the board, said  Diane Pratt-Heavner, Director of Media Relations for the School Nutrition Association.

“We’ve seen a decrease in the stigma for kids who depend on free lunches,” she said. “What’s the point in making fun of kids who get free food when it’s widely available?”

That stigma may keep students and families from meals they might need, a phenomenon that bothers Wilson because of its direct impact on children.

“Even pre-pandemic, we depend on school to provide all these things to students, until it’s time for nourishment. Then we ask them what their parents’ income is, which is just a crime to me,” Wilson said.

Entrenched poverty in Native communities has a long and complicated history, according to Marquette University historian Bryan Rindfleisch. “It starts with the treaties and the theft of land,” he said. “Some of these treaties were conducted falsely, or they weren’t honored at all.”

Both the service and tourism sectors suffered at the onset of the pandemic, and Native Americans in much of the U.S. occupy those jobs, Rindfleisch said. When companies began to get rid of jobs in the broader hospitality sector, Indian Country felt the impact.

“They are much more likely to have worked in those types of jobs,” he said.

In addition, many families that might otherwise be eligible for programs that might help assuage food insecurity may have missed the communication they needed to access them.

Many families “were just barely making it through the pandemic,” Wilson said. “They may not have even signed up for all these other benefits.”

She said Native American families in rural areas have access to food that comes via those waivers, yet logistical issues routinely complicate their use of benefits.

The impact on sites around the nation is clear — one rural district in Indiana expected to serve 600 or so families this summer, down from over 36,000 families last year, as a result of the waivers original expiration date of June 30.

Wilson said sites outside of schools that routinely provided meals will have much less bandwidth once the waivers from the federal government end. “What we found out is that faith-based, community-based programs, they are struggling to stay afloat,” Wilson said.

“We’re calling the inflation out for what it is, which is price gouging by corporate interests,” he said, adding that the immediate impact on farmers may not be as pronounced as some may think.

Yet Pratt-Heavner said that the rising costs for goods and services might complicate circumstances, not only for those in poverty, but also those close to the poverty line.

“They may earn enough where they don’t qualify for free or reduced lunch, but you’re paying so much in gas that it can be tough to feed your family,” she said.

Sandra Macmartin, a spokesperson with the United States Department of Agriculture, wrote in an email to Native News that the federal government leaves state employees and Native Americans to make decisions on how to use their resources.

“While the Food and Nutrition Service (FNS) administers the various nutrition assistance programs… at the federal level, the programs are administered locally by either Indian Tribal Organizations (ITOs) or an agency of a state government,” her email read.

Stanger-McLaughlin, whose work with the Native American Agriculture Fund partly includes helping tribes source their foods more locally, praised the Chickasaw Nation for running what she feels is a notably efficient program. Representatives from the Chickasaw Nation did not respond to multiple requests for comment.

“The Chickasaw Nation has been an incredible example,” she said, adding that the Nation provided more than 74,000 meals between 2006 and 2016.