WASHINGTON — The deadly coronavirus accelerated its spread throughout Indian Country over the last week, as the number of confirmed cases doubled over the prior week.

In Indian Country, the Navajo Indian Reservation has become the epicenter for the coronavirus. As of Sunday night, there have been 358 cases of the virus and 12 confirmed deaths related to COVID-19 in the Navajo Nation.

Even before daily increase in confirmed cases, data from the New York Times reported that one county on the Navajo Nation is ranked 13th in the world for COVID-19 cases per thousand. The situation there has drawn national media attention as the number of cases multiplies daily and its health facilities strain to keep up.  As home to about 175,000 citizens, including many who live in remote areas without electricity or running water, Navajo Nation leaders have taken an aggressive stance to curtailing the spread of the disease. 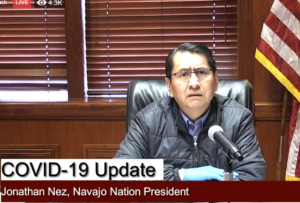 As Navajo Nation tries to curb the spread of the virus, President Jonathan Nez has taken an aggressive stand, imposing a curfew and discouraging tourists from visiting. (Photo from livestream.)

Navajo Nation imposed a nightly curfew on residents and was early in closing its borders to tourists.  Police are maintaining checkpoints to enforce the curfew. Last week, the Arizona National Guard and FEMA built a field hospital to help serve patients in one of the hardest hit areas.

Other tribes in the southwestern U.S. have reported confirmed positive cases and, in a few cases, deaths from COVID-19.

The Gila River Indian Community, which had six confirmed cases of COVID-19, reported its first death from the virus on Sunday. In a video posted on Facebook, Governor Steven Lewis Roe reported the death and pointed out the seriousness of the situation. 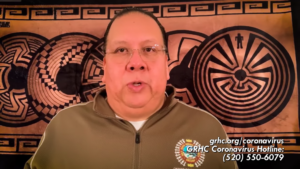 On Wednesday, April 1, Tucson.com reported two women, who were tribal citizens of the Pascua Yaqui Tribe, passed away from the coronavirus, according to tribal officials. The Pascua Yaqui Tribal Health Service is coordinating efforts with the Pima County Health Department to notify family members and those who may have had close contact with the women are encouraged to self-isolate.

In New Mexico, the Ohkay Owingeh Pueblo received word of its first positive case of COVID-19 from the New Moon Lodge, a rehabilitation facility in Rio Arriba County. Ohkay Owingeh tribal officials said community members who work at the facility have been ordered to “lockdown status” and cannot leave their property for any reason.  Food and medications are being delivered to the affected workers.

In Idaho, the Shoshone-Bannock Tribe on Friday reported its first positive COVID-19 case on its Fort Hall Reservation. The tribe ordered an enhanced Stay at Home response requiring all residents of the reservation to stay at home and leave only when absolutely necessary for health, safety or welfare.

While the majority of confirmed cases in Indian Country have been reported in southwestern states and the Pacific northwest, tribes in other parts of the country have begun to see their first cases.

In Oklahoma, where a Cherokee Nation citizen was the first casualty of the virus in the state, 10 new cases of the disease were reported as of Friday.

“We must all act to stay healthy, monitoring our own health and that of our family, limiting travel, if possible, and checking on our elders who are most vulnerable,” Cherokee Nation Principal Chief Chuck Hoskin Jr. said.