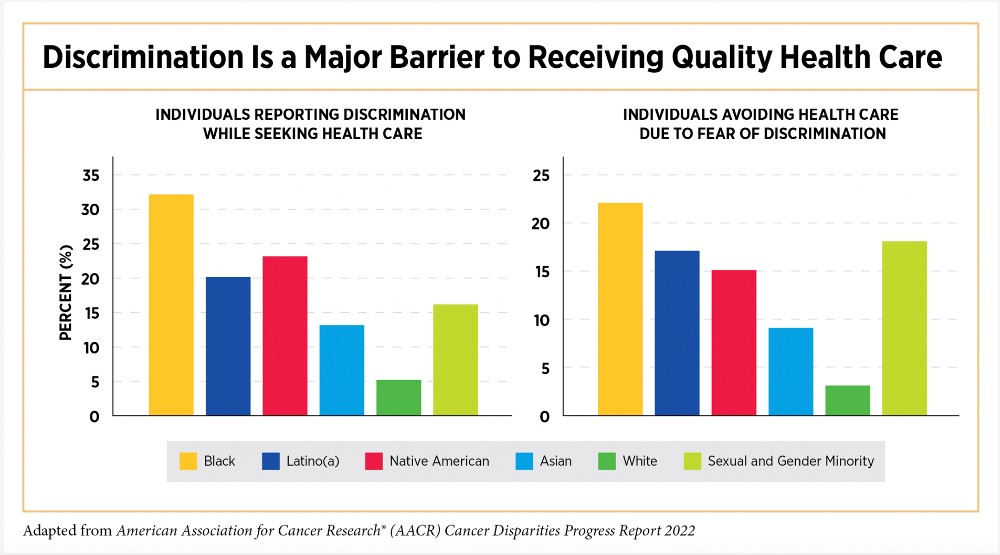 Last week, the American Association for Cancer Research (AACR) released its Cancer Disparities Progress Report for 2022 which seeks to raise awareness about the health disparities that disproportionately affect marginalized communities. The results of this study are particularly alarming for Native people.

The same pattern extends to other regions. With lung cancer being the most diagnosed cancer in the AI/AN population, the Northern Plains PRCDA region has a five times higher incidence of lung cancer than those living in the Southwest PRCDA region. And, when compared to White individuals, the lung cancer incidence is 80 percent  higher among AI/AN individuals living in the Northern Plains. For the communities in the Southwest, it is 64 percent lower.

A potential reason for this high rate of lung cancer could be that AI/AN adults are nearly 40 percent more likely to smoke cigarettes compared to any other population groups in the United States.

For the entire AI/AN population, the incidence rate for kidney cancer is 80 percent higher compared to the Non-Hispanic White population. Natives also have the highest liver cancer incidence rate of any major racial or ethnic group in the United States.

Not only are the rates of many cancers disproportionately higher for Native communities, the report cites that our access to funding, healthcare, and representation are severely limited.

In 2020, only 0.5 percent of registered nurses identified as AI/AN. This is the lowest of any racial minority group. The report also found that more than 20 percent of Natives report discrimination while seeking health care. An infographic showing this can be found here.

Not only does the medical field lack AI/AN representation, but Native communities also have the poorest 5-year survival rate from cancer of any racial group.

To start to address these disparities, the AACR recommends that Congress address the underfunding of the Indian Health Service (IHS). IHS serves 2.6 million AI/AN people, but they are severely underfunded, and most facilities are outdated. The average age of IHS health facilities is 40 years, compared to the national average of 10.6 years. As for funding, the report states:

“IHS spends less than $4,000 per year per beneficiary on health care, compared to more than $13,000 per Medicare beneficiary (3.5-fold greater) or $9,500 for veterans (2.5-fold greater) in the Veterans Affairs health system. IHS is in desperate need of additional investment from Congress to adequately serve the health needs of AI/AN, especially those living in remote rural areas without other options for health care services.”