‘Left in the Dark’: IHS Shuts Down Vital Hospital Services in Acoma Pueblo During Pandemic 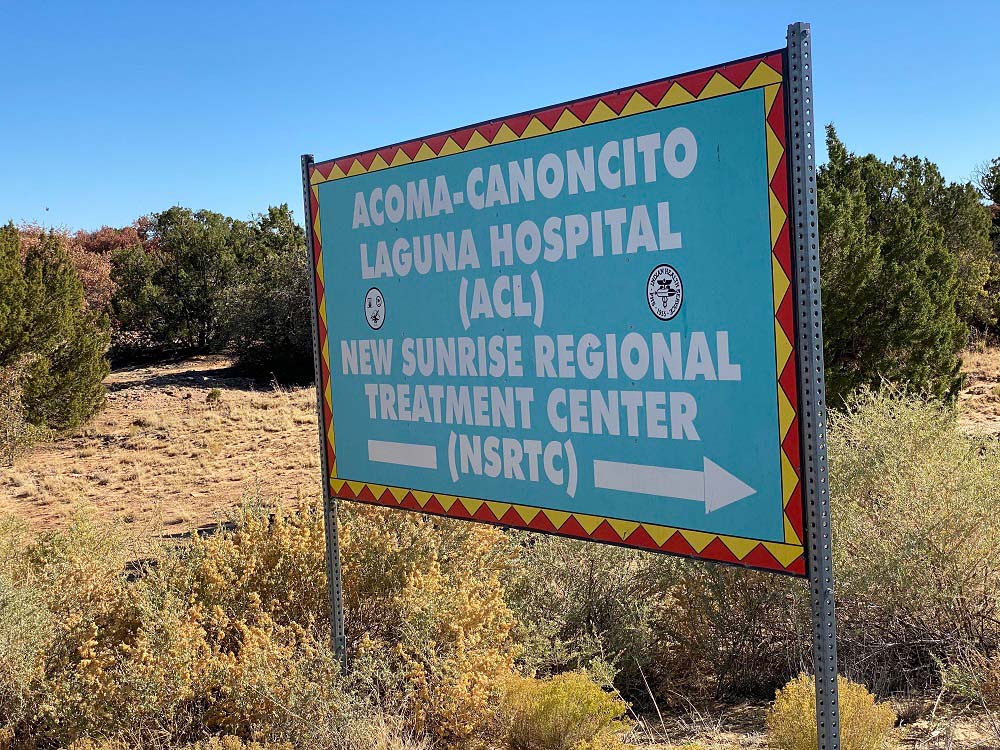 Amid the worst wave of the Covid-19 pandemic yet, the Indian Health Service has moved some medical treatment from the Acoma-Canoncito-Laguna Service Unit (ACL Hospital) in Pueblo of Acoma, N.M. to a new facility in nearby Pueblo of Laguna.

The Pueblo of Acoma is critical of the way that IHS is handling the move, which they say is negatively impacting their community in the middle of the global health crisis. On Nov. 6, Pueblo of Acoma Gov. Brian Vallo declared a state of emergency in Acoma Pueblo due to the discontinuation of some services at the ACL Hospital.

In a Sept. 29 press release, IHS Director Rear Adm. Michael D. Weahkee commented on the ramp down of services at the ACL Hospital, stating that “IHS has met with leaders from all affected tribes to inform them of the contract proposal and to begin discussions on the potential impact to operations and related health services.” According to the press release, impacted tribes were consulted on the rearrangement of local health services.

However, Pueblo of Acoma Gov. Brian Vallo says that his community is being left in the dark about IHS’s plans. “There’s still a great concern on the part of the tribe regarding what the Indian Health Service has created, in terms of their actions, in light of the Pueblo of Laguna removing their shares,” Vallo told Native News Online. “That’s really what has created this crisis, their judgment and lack of any real consultation with us.”

Vallo says that Pueblo of Laguna “has every right” to remove their financial shares in the 50-year-old ACL Hospital, which they did over the summer in order to reallocate funding to the Laguna Health Center, a new facility that will be constructed on Laguna tribal land. However, Vallo worries that the Pueblo of Laguna didn’t consider what would happen in “the interim between when they requested the funding [for the new hospital] and when they would actually open their health care facility” in February 2021.

According to both IHS and Vallo, a delay in the discontinuation of services at the ACL Hospital until after the pandemic was requested and denied. But both sides say different parties were responsible for the denial.

The Acoma tribe, which has more than 5,000 members, has been hit hard by the pandemic. The community has reported 475 positive cases of Covid-19 and has lost 18 tribal members to the virus.

According to IHS’s website, the ACL Hospital serves approximately 9,100 members from three different tribes, with about 126,000 visits each year. Until recently, the hospital employed a staff of 230 people. The reduced services add an extra burden to Indian Country, which has a Covid-19 hospitalization rate four times that of white people, according to the CDC.

Acoma tribal members are already experiencing setbacks when trying to access medical care. The ACL Hospital is currently the only place where residents of Pueblo of Acoma can get health care. Barnett said that the ACL Hospital will continue “providing primary care, preventive health care services, and urgent care services” even after February, when the Laguna Community Health Center opens. However, patients requiring more intensive care will “be referred to other hospitals.”

This frustrates Vallo, who says that the ACL Hospital is now understaffed and operating at diminished hours (primary care is currently only available during regular business hours). “We’ve had situations, unfortunately, where tribal members who have experienced Covid symptoms or are Covid positive have gone to the hospital after hours and have been denied service,” he said.

On Dec. 31, IHS added 24-hour urgent care services at the ACL Hospital. Barnett said that "prior to that, the ACL Service Unit had been providing urgent care from 8 a.m. to 10 p.m., 7 days/week, since emergency department services were stopped [in late October]."

Residents of Pueblo of Acoma needing primary medical attention after hours or emergency care may end up having to go to Albuquerque, more than 60 miles away, as the new hospital in Laguna is not yet operational (which is why a delay was requested).

But since the ACL Hospital is the only medical facility currently accessible to the Pueblo of Acoma community, and because it’s only open from 8 a.m. to 4:30 p.m. on weekdays for primary care, tribal members can face difficulty getting referrals to other hospitals.

In his press release, Rear Adm. Weakhee, director of IHS, cited staffing and funding shortages for the “redesign” of local health care facilities. He said that if the Pueblo of Laguna wished to hire “qualified individuals from the general public” to make up for staffing shortfalls, they could do so. IHS will not staff the Laguna Hospital, the Pueblo of Laguna will hire medical professionals to staff it.

“We had every opportunity to maintain the staff that was there but the way that the Indian Health Service managed the limitation of services caused many of those medical providers to leave. There was no effort on the part of Indian Health Services to try to retain them,” Vallo explained.

The Pueblo of Acoma governor also voiced frustration with IHS’s discontinuation of emergency care at the ACL Hospital, at a time when New Mexico’s ICUs are reaching capacity. Vallo says that the ACL Hospital can accommodate as many as 25 hospital beds but because emergency treatment is no longer provided at the hospital, the beds are empty.

“Unfortunately we have a hospital sitting on our tribal land that is not contributing to the state of New Mexico,” Vallo said. “It’s utterly ridiculous.”

IHS has also recently received criticism for suddenly halting OB-GYN services at the Phoenix Indian Medical Center and for withholding funding for the Navajo Health Foundation-Sage Memorial Hospital. Both hospitals are located in Arizona.

Gov. Vallo says that although IHS’s headquarters in Washington, D.C. have “tried to maintain some contact with” Pueblo of Acoma, he is frustrated with D.C.’s lack of clarity about the ACL Hospital’s future. As for IHS’s Albuquerque Area branch, which oversees the ACL Hospital, Vallo doesn’t feel that they have offered Pueblo of Acoma enough support. “The whole Albuquerque Area office is completely worthless,” Vallo said.

Update (1/6/2021): This article has been updated with an additional statement from Indian Health Service spokesperson Joshua Barnett to note that IHS added 24-hour urgent care services at the ACL Hospital on Dec. 31.