Earlier today, Whitmer told the audience at a Biden campaign stop in Michigan how she had to fight an insurance company that cut off her mother’s benefits while her mom was undergoing cancer treatment. She said the Affordable Care Act, commonly known as Obamacare, helped her family through the medical crisis.

For that, she appreciates the long service former U.S. Senator and Vice President Biden has given to this country, especially his work to champion healthcare while he served as vice president under President Barack Obama. Last week, Gov. Whitmer endorsed Biden for president. Whitmer said her mother and Biden’s son, Beau, died of the same type of brain cancer.

On Monday morning, she was on hand at the Cherry Health’s Heart of the City Health Center in Grand Rapids, Mich. to introduce Biden to a group of reporters, one day before the Michigan presidential primary. 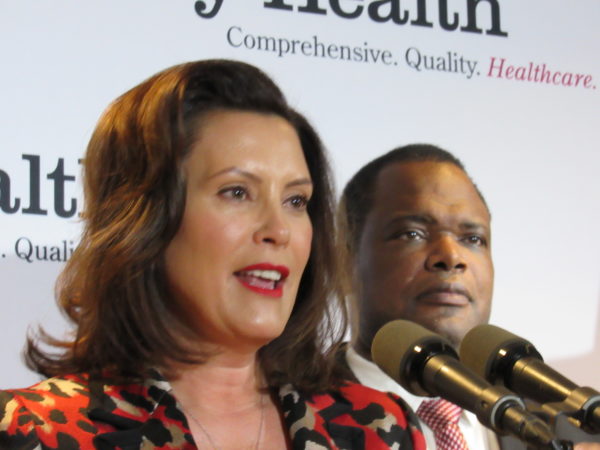 Biden said he appreciates how hard Whitmer worked to make sure Obamacare was not tied to work while she was in the state legislature, fighting then Gov. Rick Snyder.

Biden toured the community health facility before meeting with reporters and said he was pleased with the care provided by Cherry Health. He said the facility was such that patients from the community can come to get treatment with dignity.

“My dad used to have an expression. He said, ‘It is all about dignity.’ That is what you are doing here, you are providing good health care with dignity,” Biden told the Cherry Health officials as he complimented them on the well-run health clinic on the southeast quadrant of downtown Grand Rapids. 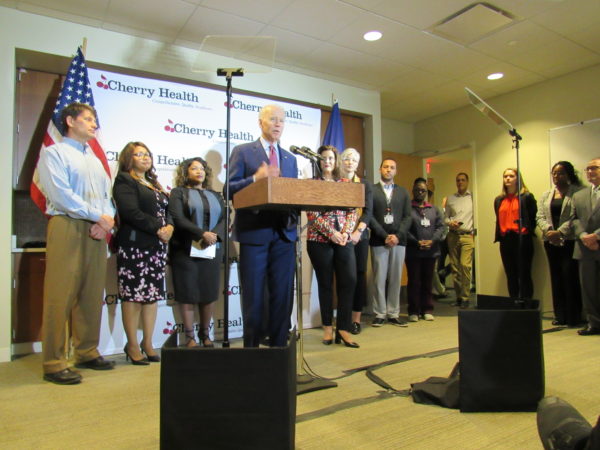 Biden also told Whitmer that a Biden administration would be a partner in providing healthcare to Michigan residents.

“Governor, under my administration, you are going to have a partner in the White House who never, never undermines Medicaid. I cannot fathom what it would feel like to turn and look at your child with a serious health problem and know there is nothing you can do about it,” Biden said. “This is essential.”

Both Biden and Bernie Sanders have been in and out of Michigan during the past few days to try to win over voters in Michigan’s primary on Tuesday.

Biden’s Monday morning appearance at the community health clinic was in stark contrast to Sanders’ rally on Sunday in downtown Grand Rapids that drew an enthusiastic crowd of 7,600.

Biden left Grand Rapids to visit Flint. Tonight, he will campaign for two former Democratic rivals, Sen. Kamala Harris (D-CA) and Sen. Cory Booker (D-NJ), in Detroit at a get out the vote rally. 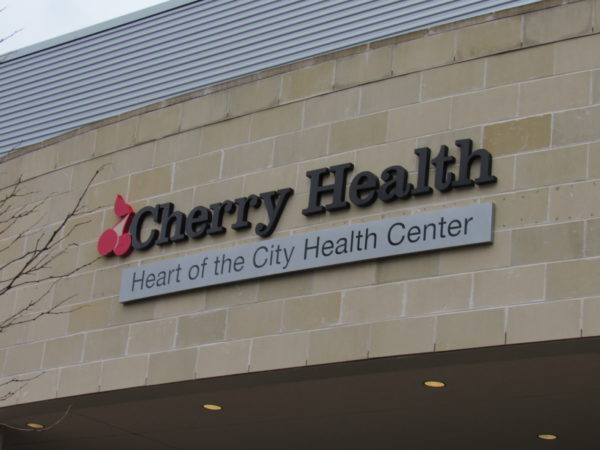 During the Obama/Biden administration the number of community health faciliites doubled in the country because of Obamacare.