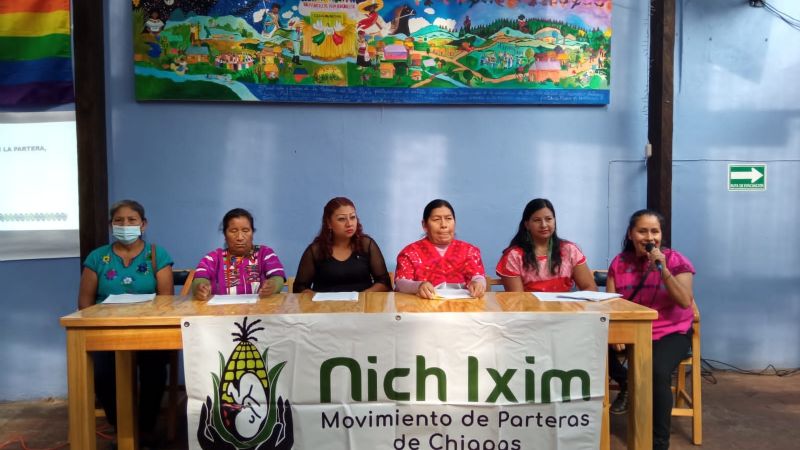 Indigenous women from the Chiapas Nich Ixim Midwives Movement demanded that they be respected and allowed to practice midwifery freely, without being criminalized.

MEXICO–Indigenous midwives from the Mexican state of Chiapas demanded that the state and federal government stop the harassment of them by medical personnel in the health sector. They demanded a new form of connection to be able to carry out their work, since there is a preference towards them by pregnant women.

This article originally appeared in Proceso. Republished in english by Native News Online with permission.

Within the framework of the International Day of Midwives, celebrated this May 5, Indigenous women of the Chiapas Nich Ixim Midwives Movement, demanded that they be respected to practice midwifery freely, from our worldview, without being conditioned or criminalized, that the right of women to decide where, how and with whom they want to give birth be respected, and they demanded a new form of linkage with the Health Sector based on respect and non-subordination of our persons, our knowledge, and practices.

They pointed out that during 2021, the Chiapas Midwives' Movement documented the care of 2,274 births by 237 midwives who are members of the Movement. From January to March 2022, 448 births attended by 96 midwives have been reported.

According to the INEGI, of the registered births that occurred in 2020, 36% of them were attended by us midwives. In 18 municipalities of the State, this percentage is greater than 75%, most of them Tseltal and Tsotsil municipalities.

Traditional midwives in Chiapas said they seek to restrict illegal practices and humiliating treatment that affect midwives, mothers and babies.

But despite this, in some areas of the State its exercise has been restricted, prohibiting us from attending births directly. In addition, several mechanisms are used to discourage delivery from being attended by midwives:

“There is constant pressure on women to generate unfounded fears of being attended by midwives, with false information about maternal and neonatal care and safety of midwifery,” the Indigenous women denounced in a document read this Thursday.

They said that women are conditioned to attend prenatal check-ups at clinics to provide basic services to babies - such as screening tests and vaccinations. Likewise, in transfers due to complications during pregnancy or delivery of women who did not undergo prenatal control at the clinic, their admission to the hospital is delayed, putting their lives and those of their babies at risk.

When babies are born in the hands of midwives, their birth certificate is denied or hindered, thus violating the human right to identity and to be registered immediately after birth, as stated in Article 4 of the Additional Mexican Constitution to the obstacles and obstacles faced by women who decide to give birth with a midwife.

“We demand an end to the harassment of midwives and we demand that the lives of women and their babies be put at the center, providing them with the vital health services to which they are entitled regardless of who they attended. Despite this situation, despite all the obstacles, a large part of the women from Chiapas prefer and decide to attend to us”, they indicated.

They pointed out that the experiences of women in health institutions in the State of Chiapas, be they health centers or hospitals, continue to be full of negative stories, where there is lack of care, mistreatment and obstetric violence:

That obstetric violence is experienced in many ways by women who go to health services and, despite being penalized by the Law on Access to a Life Free of Violence for Women in the state of Chiapas and is a crime according to the Chiapas Penal Code, it is very difficult to punish because of the fear of women to file a complaint, because of the complicity in the health union and because access to justice in this country continues to be deficient.

They regretted the case of Lorena de Jesús Padilla, a 20-year-old girl from the municipality of Las Rosas who died on February 13 of this year at the Hospital de las Culturas in San Cristóbal de las Casas, the victim of a chain of medical negligence. and obstetric violence after a caesarean section in which a gauze pad was left inside her. We express our condolences and demand justice and reparation for her and her family.

That is why today they asked that health services attend pregnant women in a timely, respectful and non-violent manner, and that the General Inter-institutional Collaboration Agreement for Obstetric Emergency Care be complied with so that there is not a single woman to be rejected in hospitals.

They demand that the right of every newborn person to their identity be fulfilled and be registered immediately upon birth and that traditional midwives be present in the spaces where maternal health policies are decided.